The twitches in Scott Roberts’ head started when he was just 12. His involuntary head movements were misdiagnosed as Tourette’s Syndrome, and for 17 years he took medication prescribed for that condition, as the twitches progressed to violent twists that affected his whole back.

Even his gait was affected, pulling him to the right. By 2008 the symptoms had become so severe that he need assistance walking, and, at age 27, he had to start using a wheelchair and take a medical leave from work that would stretch to two-and-a-half years.

During that leave, Scott’s physician determined that it was not Tourette’s at all that was producing his problems but a rare disorder called cervical dystonia or spasmodic torticollis that most often occurs in middle-aged women. The severity of the involuntary muscle contractions, twisting his back so hard he would fall, made it even rarer.

“The pain from the twisting was so bad it felt like I was waiting for my spine to snap,” says Scott. 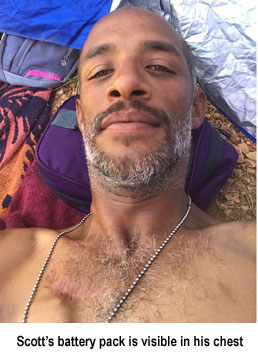 Cervical dystonia is a newer diagnosis, only recognized in the past 30 years or so. That, combined with the rarity of the condition, mean patient numbers are low and studies are few. So, for six months, his doctors tried medication after medication to control his symptoms, but nothing worked.

“They were dumping toxins in me. I felt like a guinea pig,” says Scott. “Nothing against the doctors. I understand that’s just how it is.”

All the doctors could offer were a host of opioid narcotics for the pain. After exhausting the pharmaceutical options, the next step was deep brain stimulation surgery to implant an electrode that would block the signals that were causing his muscles to contract.

The surgery to place the implant in the brain and the battery in the chest is a long one, taking 10-12 hours. Unfortunately for Scott, the surgery left him with a life-threatening MRSA infection, so the device was removed and they tried again. The second attempt worked, but six months later a battery change surgery resulted in another infection that required the whole thing to be removed and replaced again. The associated pain put him out of work again from June 2016 to April 2017.

All in all, Scott was out of work for more than three years, battling pain and, as he girlfriend describes it, “walking around like a zombie” from all the opioids and other medications: Tramadol, Percocet, Valium, Flexeril, Gabapentin, Klonopin, morphine, and others.

“Instead of flooding myself with pharmaceuticals, I decided to give medical cannabis a try,” Scott says. It worked. Soon, he was reducing or eliminating the other medications and experiencing pain relief.

When Scott went back to work as a county employee in April 2017, he decided he needed to comply with workplace medication rules, so he’s again taking a “host of pharmaceuticals.”

“I know what works, but it’s promotion time,” he says. “People respect my work, but they don’t know my personal story.”

Scott is hoping to see real employment protections for patients in California and a change to federal law. He’s lobbied his elected officials and sent his story to his Congressman, Rep. Ami Bera MD, asking him to help get the federal government to recognize that cannabis should not be Schedule I.

“It’s the stigma that people have, but this is real medicine,” Scott says. “People use medical cannabis for real reasons.