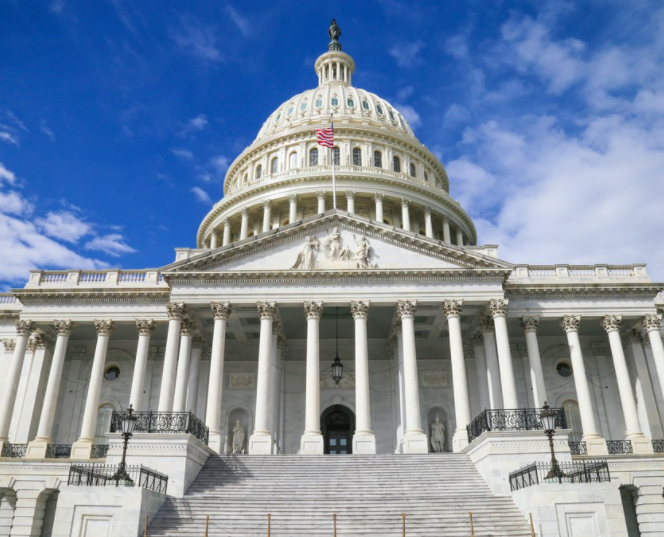 UPDATE: On May 8, 2018 H.R. 5520, The VA Medicinal Cannabis Research Act of 2018 was reported favorably out of the House Veteran Affairs Committee. The bill, while limited in scope (it codifies the VA's ability to do research on medical cannabis) marks the first time a stand-alone cannabis bill has been reported favorably by a committee since the introduction of the Controlled Substances Act. The bill is currently awaiting being scheduled for a vote in the full House.

Despite medical cannabis laws in 46 states, cannabis is still illegal under federal law. The federal government regulates drugs through the Controlled Substances Act (CSA) (21 U.S.C. § 811), which does not recognize the difference between medical and recreational use of cannabis. These laws are generally applied only against persons who possess, cultivate, or distribute large quantities of cannabis.

Under federal law, cannabis is treated like every other controlled substance, such as cocaine and heroin. The federal government places every controlled substance in a schedule, in principle according to its relative potential for abuse and medicinal value. Under the CSA, cannabis is classified as a Schedule I drug, which means that the federal government views cannabis as highly addictive and having no medical value. Doctors may not "prescribe" cannabis for medical use under federal law, though they can "recommend" its use under the First Amendment.

Federal cannabis laws are very serious, and punishment for people found guilty is frequently very steep. Federal law still considers cannabis a dangerous illegal drug with no acceptable medicinal value. In several federal cases, judges have ruled that medical issues cannot be used as a defense, though defense attorneys should attempt to raise the issue whenever possible during trial. Federal law applies throughout Washington D.C. and the United States, not just on federal property.

As of 2016, several federal agencies have issued guidelines and other policy memorandums to manage the conflict between federal and state laws as they pertain to medical marijuana. On August 29, 2013 the Department of Justice (DOJ) issued a guidance memo to prosecutors concerning marijuana enforcement under the Controlled Substance Act (CSA) making it clear that prosecuting state legal medical marijuana cases is not a priority.   The memo included eight guidelines for prosecutors to use to determine current federal enforcement priorities. Fortunately, most medical cannabis program’s regulations require the same guidelines ensuring that any business with a licenses are meeting these requirements as well. These guidelines include:

1. Preventing of distribution of marijuana to minors;

2. Preventing revenue from the sale of marijuana from going to criminal enterprises, gangs or cartels;

3. Preventing the diversion of marijuana from states where it is legal under to state law in some form to other states;

4. Preventing state-authorized marijuana activity from being used as a cover or a pretext to traffic other illegal drugs or other illegal activity;

5. Preventing violence or the use of firearms in cultivation and distribution of marijuana;

6. Preventing drugged driving and the exacerbation of other adverse public health consequences associated with marijuana use;

8. Preventing marijuana possession or use on federal property.

If convicted and sentenced to jail, a minimum of 85% of that sentence must be served. The higher the amount of cannabis, the more likely one is to be sentenced to jail time, as opposed to probation or alternative sentencing. Even for a defendant with multiple prior convictions, being charged with low-level offenses may lead to probation for the entire sentence of one to twelve months, with no jail time required. Possession of over 1 kg of cannabis with no prior convictions carries a sentence of six to twelve months with a possibility of probation and alternative sentencing. Over 2.5 kg with no criminal record carries a sentence of at least six months in jail; with multiple prior convictions, a sentence might be up to two years to three years in jail with no chance for probation.

Conflict between State and Federal Law

As of this printing, the federal government claims that marijuana is not medicine and in Gonzales v. Raich (2005), the United States Supreme Court held that the federal government has the constitutional authority to prohibit marijuana for all purposes. Thus, federal law enforcement officials may prosecute medical marijuana patients, even if they grow their own medicine and even if they reside in a state where medical marijuana use is protected under state law. The Court indicated that Congress and the Food and Drug Administration should work to resolve this issue.

The Raich decision does not say that the laws of California (or any other medical marijuana state) are unconstitutional; nor does it invalidate them in any way. Also, it does not say that federal officials must prosecute patients. Decisions about prosecution are still left to the discretion of the federal government.

According to a post-Raich statement by California Attorney General Bill Lockyer, the ruling does not overturn California law permitting the use of medical marijuana. Lockyer also underscored the role of local law enforcement in upholding state, not federal, law. A superior court has rejected the County of San Diego's claim in a lawsuit filed against the State that California's medical marijuana laws are preempted by federal law. As of this printing, that case is pending on appeal.

States have recognized marijuana's medical value and have either passed laws through their legislatures or adopted them by initiative. In support of the numerous states that have taken responsibility for the health and welfare of their people, and have implemented medical marijuana laws, ASA is fighting for states' ability and right to pass and enforce their own laws, regardless of federal law.

In 2014 and 2015, Congress called a ceasefire in the federal war on medical cannabis. In the first change in federal law affecting patients since 1970, when it classified cannabis as a dangerous drug with no medical use, Congress approved a budget amendment that prohibits Justice Department funds from being used to prevent states from implementing medical cannabis laws. These restrictions on federal enforcement are part of the 2016 funding bill for the Commerce-Justice-Science (CJS) budgets and expire at the end of the fiscal year, September 30, 2016. Protections were continued through 2017 and will expire on September 30, 2018 without additional action by Congress.

Known as the Rohrabacher-Farr or CJS amendment, it first signed into law on December 16, 2014 and then again on December 18, 2015. The Rohrabacher-Farr amendment doesn’t just prevent direct interference with state implementation; it should also end federal medical cannabis raids, arrests, criminal prosecutions, and civil asset forfeiture lawsuits, as well as providing current medical cannabis prisoners with a way to petition for their release.

Similar bipartisan amendments to limit federal enforcement in medical cannabis states have been offered seven times over the past 12 years without success. Over the past few years, ASA has promoted citizen lobbying as part of the annual National Medical Cannabis Unity Conference and Lobby Day in Washington, DC. Hundreds of visits from patients and advocates have helped demonstrate to Members of Congress that medical cannabis is an issue important to their constituents.

The current version of the amendment was renewed in the FY 18 Appropriations process and expires September 30, 2018 without additional action by Congress.

On October 19th, 2015 Judge Breyer from San Francisco’s federal court ruled that the prosecutions of medical cannabis defendants must be consistent with the Rohrabacher-Farr Amendment in a long-standing case with Marin Alliance for Medical Marijuana (MAMM) and its founder Lynette Shaw. Judge Breyer ruled that the Amendment "forbids the Department of Justice from enforcing this injunction against MAMM to the extent that MAMM operates in compliance with state California law.” In other words, as long as providers adhere to state law, the Amendment prevents DOJ from shutting down state-legal providers.

While this is a major victory for medical cannabis patients and providers, it is important to note that this case is not binding in other federal jurisdictions, and judges in other jurisdictions could rule otherwise. In early 2015, a federal judge in Washington State refused to dismiss the Kettle Falls Five case when presented with a motion invoking the Amendment. However, the judge in that case had determined that there was a strong likelihood that the defendants had violated state law, and there was not a similar determination made in the MAMM case.

In May 2016 the DOJ dropped its civil forfeiture action against Harborside Health Center in Oakland, CA. The case was brought by the DOJ back in 2011 as part of a federal crackdown against legal state medical cannabis dispensaries. The dropping of the case was at least in part the result of the Rohrabacher-Farr amendment, which prevents the DOJ from interfering with those abiding by their state medical cannabis law.

Since the Harborside was dropped, it does not carry any binding legal precedent. However, the fact that it was dropped strongly suggests that the federal prosecutors thought they would lose the case had it continued in the courts.

Today, several federal agencies have issued guidelines and other policy memorandums that are legitimate efforts to manage the emerging issues within medical marijuana. In fact, as of 2016, every federal agency except the Drug Enforcement Administration (DEA), has stopped ignoring medical cannabis. Starting with the 2009 Ogden memo and later the 2013 by Deputy Attorney General James Cole, the Department of Justice has made clear that state legal medical marijuana is not a priority.  However, this guidance was rescinded by Attorney General Jeff Sessions in early 2018.

In 2010, the VA updated their policies to no longer deny veterans’ access to medical services due to their participation in a state-legal medical marijuana program. The VA issued updated guidance in 2017, adding a policy to support the Veteran-provider relationship when discussing the use of marijuana and its impact on health including Veteran-specific treatment plans. This marked a slight shift from previous guidance because it actively encourages VA providers to discuss the use of cannabis with their patients without adverse consequences to develop a more complete picture of care.

In 2014, the Treasury Department  issued guidelines to facilitate banking in the marijuana industry. This guidance appears to be legally unaffected by Attorney General Sessions rescission of the Cole Memo.

Information being disseminated to the public from federal agencies has also improved, including the National Institute of Drug Abuse (NIDA) DrugFacts: Is Marijuana Medicine?, the Food and Drug Administration’s FDA and Marijuana: Questions and Answers and the National Cancer Institute’s Cannabis and Cannabinoids. Research barriers are are also beginning to fall, with the Office of National Drug Control Policy lifting the Public Health Service (PHS) review, a hurdle only cannabis researchers had to clear in 2015. Likewise, NIDA now supports letting other research centers grow research cannabis, ending the NIDA monopoly.