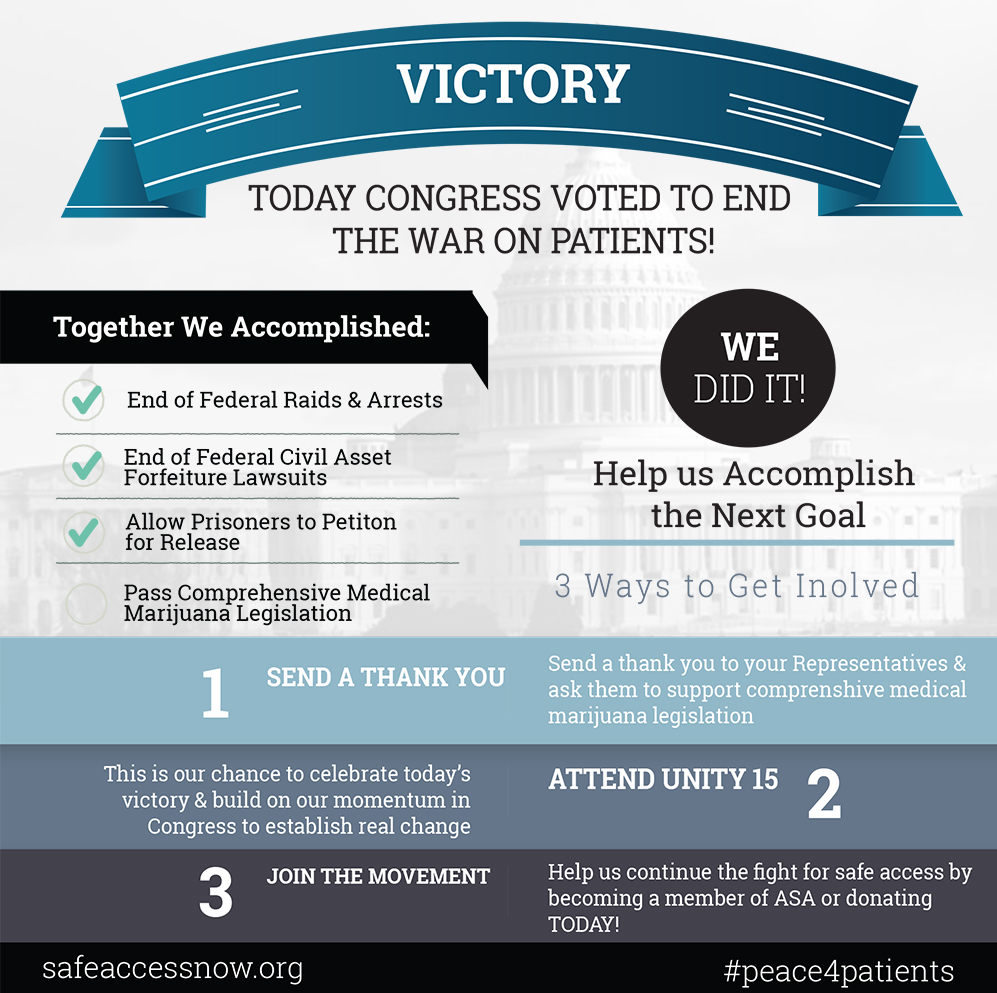 The Senate just passed the CRomnibus bill containing the historic Rohrbacher-Farr Amendment, and now the bill will make its way to the President's desk where is will soon be signed into law. In doing so, Congress has collectively sent a sharp and powerful rebuke to the Department of Justice's crackdown on state medical marijuana laws. The bill passed in the House of Representatives late Thursday evening by a vote of 219-206.

Passage of this legislation should serve as the catalyst for more comprehensive Federal medical marijuana reform, and one of the best ways to take advantage of this newly created opportunity is by taking part in ASA's National Lobby Day on March 31, 2015. We will be pushing for passage of the States' Medical Marijuana Patient Protection Act, which was introduced this session by Rep. Earl Blumenauer. The bill would reschedule marijuana in the Controlled Substances Act to Schedule III or lower, and would permanently end all interference with state medical marijuana conduct. Remember, as an appropriations rider, the amendment passed today will only carry through the end of the fiscal year (Sept. 30, 2015), so we must take advantage of this opportunity.

Inclusion of the Rohrbacher-Farr Amendment would not have been possible without the efforts of patients and parent-activists from Alabama, Kentucky, and Virginia, who called up conference committee members Sen. Shelby (R-AL), Rep. Rogers (R-KY) and Rep. Wolf (R-VA). These three members were the stiffest opposition to including the amendment, and the efforts of the patients and parents who reached out them really paid off. By engaging with the opposition, these advocate created the political space for Senator Mikulski (D-MD) to get the amendment included in the final bill. For more about passage of the amendment and what it means to the medical marijuana movement, please check out our blog entry from Wendesday, Congress Set to Pass Landmark Medical Marijuana Legislation. And don't forget to thank your Members of Congress for passing the first-ever Congressional medical marijuana reform legislation. Wellness is winning!