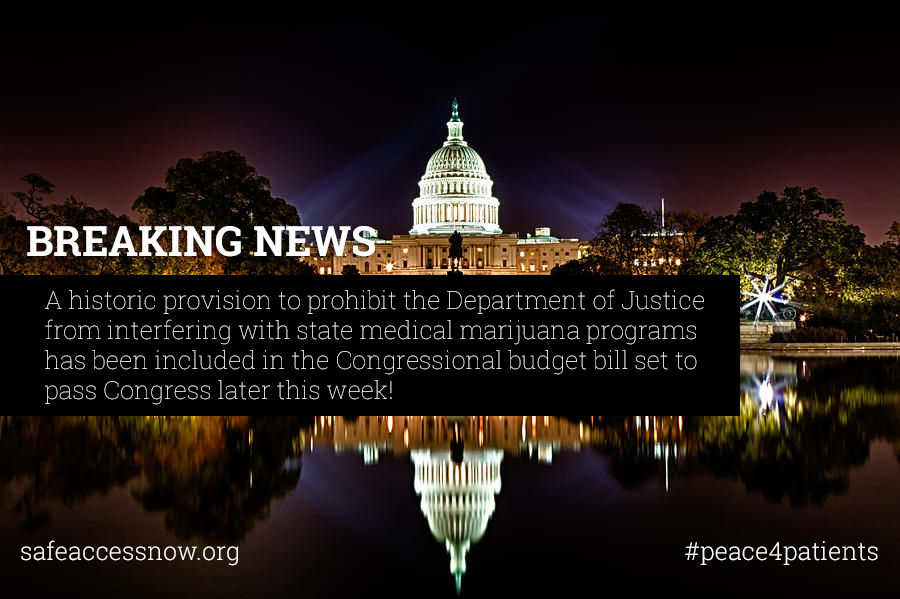 A historic provision to prohibit the Department of Justice from interfering with state medical marijuana programs has been included in the Congressional budget bill set to pass Congress later this week. On Tuesday evening, the final version of "Consolidated and Further Continuing Appropriations Act" (or "Cromnibus") was published on the House Rules Committee website. Pages 213-214 of the 1600+ page bill contain the Rohrbacher-Farr Amendment language, which was passed by the House back in May, but never reached the Senate floor. Both the House and Senate must now vote on the complete bill, and it is expected to be passed and signed into law later this week, which will make the landmark language official.

Including the Rohrbacher-Farr Amendment language in the Cromnibus was an accomplishment that was 12 years in the making, first introduced by Reps. Dana Rohrbacher (R-CA) and then-Rep. Maurice Hinchey (D-NY) in 2003. As support grew over the years, more sponsors joined the amendment, with 12 bi-partisan sponsors in 2014, six from each party; Don Young (R-AK), Earl Blumenauer (D-OR), Tom McClintock (R-CA), Steve Cohen (D-TN), Paul Broun (R-GA), Jared Polis (D-CO), Steve Stockman (R-TX), Dina Titus (D-NV), Justin Amash (R-MI) and Barbara Lee (D-CA). When the House vote took place in May, 49 Republicans joined 170 Democrats in favor of the amendment, one of the strongest bipartisan showings on controversial piece of legislation in the 113th Congress. In the other body of Congress, Senator Barbara Mikulski (D-MD) led the charge for patients during the conference committee negotiations. Senator Mikulski's leadership helped the language survive a major challenge from Rep. Wolf (R-VA), Rep. Rogers (R-KY), and Sen. Shelby (R-AL) to strike it.

An additional reason for the success of the amendment were the lobby days in support of the Rohrbacher-Farr Amendment and other medical marijuana bills that were held by ASA in 2013 and 2014. These lobby days were instrumental in demonstrating to Members of Congress that medical marijuana is an important issue among their constituencies. As ASA looks to build off of the success of the Rohrbacher-Farr Amendment, we are going to need an even bigger push from our citizen-lobbyists at our 2015 Congressional Lobby Day on March 31, 2015.

The bill will take effect immediately once it is signed into law. While the full impact of the amendment will play out over the coming months, we are confident that the impact will be significant. It will mean that lawyers representing medical cannabis defendants can now file motions to dismiss. It will mean that the federal investigations, raids, arrests and prosecutions for medical marijuana conduct permitted under state law will come to an end. Additionally, states that have previously been apprehensive about medical marijuana legislation can feel confident that they are not putting state employees and others at risk of federal interference. Federal agents will still be able to go after non-medical conduct, but they must be able to demonstrate that the parties are not acting in accordance with state law. It should be noted that enforcement of state law is best left up to the states, which is consistent with the amendment language. We also expect this amendment to mean the release of federal medical marijuana prisoners.

This is especially meaningful in the Kettle Falls Five case, where local prosecutors refused to press charges because they saw no violation of state law. Kettle Falls Five defendant Larry Harvey traveled twice across the country to lobby members of Congress in support of the amendment (see, citizen lobbying REALLY works!). Several members of Congress joined with Larry for a press conference in front of the Capitol back in May to show their support of patient rights.

Simply put, patients can take comfort knowing they will have safe access to the medical care they need without fear of federal prosecution. And all of us can feel better knowing our federal dollars will be spent more wisely fighting actual crimes and not wasted going after patients. But the battle goes on, and while this is the biggest success in federal medical marijuana reform to date, issues like rescheduling, barriers to research, impediments to banking services, and fair taxation of commercial medical marijuana providers still remain. A true comprehensive medical marijuana bill, such as Rep. Blumenauer's HR 689, would do much to achieve these goals.

Does the D.C. marijuana language in the omnibus negatively affect patients in the District?

In addition to the Rohrbacher-Farr language, the so-called Harris Amendment was included in the portion of the omnibus dealing with the District's budget. As it appears in the omnibus, the Harris Amendment only applies to D.C. and would do one of two thing; (1) either it would block the District from implementing Initiative 71 (the recreational marijuana ballot measure that passed with 69% support), or (2), it would block the District government from adding on retail recreational stores to the the law, as they were not included in the amendment. As a result of this uncertainty, there is an ongoing debate as to what is and what is not prohibited, but a few things are completely clear. Most importantly, there is nothing in the bill that will harm the District's medical marijuana program. Sec. 809(a) prevents the District from using Federal funds from carrying out the program, but the word "Federal" is absent from Sec. 809(b), which means the District is free to fund and administer the medical marijuana program using locally collected D.C. government revenue, which has always been the way the program has been funded.

ASA remains neutral when it comes to marijuana legislation outside the scope of scientific research and physician-recommended therapeutic use; however, it is disturbing to see federal interference with a duly held and certified election, effectively disenfranchising those who voted in the election. But as disturbing as the D.C. amendment is, patients and providers in District can rest assured knowing that the our medical marijuana program will remain intact.

This blog was updated to clarify ASA's position on the Rohrbacher-Farr Amendment.