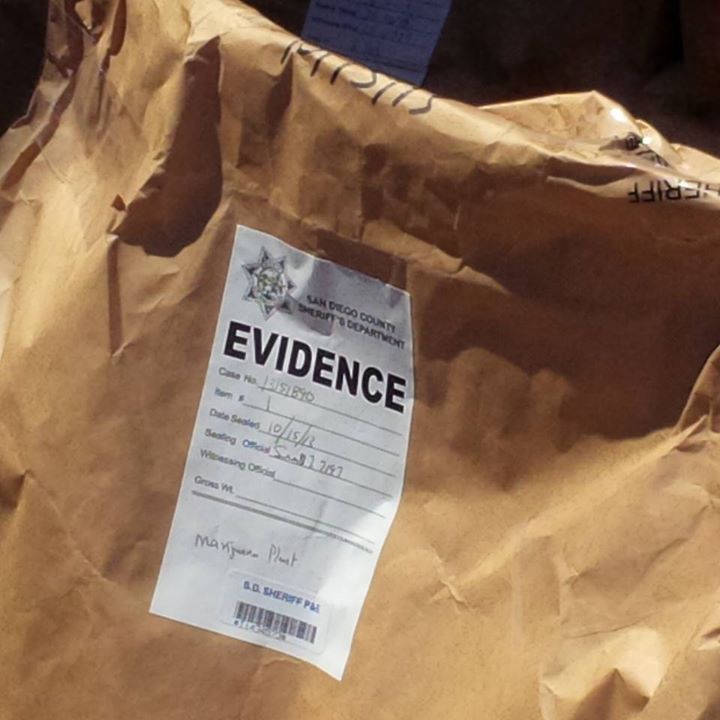 San Diego, CA - Many years from now, if I ever have the occasion to single out my most telling turning point in the undoing of medical marijuana prohibition in my town, it might be today.  Not because an important memo was released or some great local legislation is one notch nearer to becoming law, but because today San Diego’s NBC News watched the Sheriff’s office return, what their deputies themselves say is 40 pounds of cannabis flower, boxes of vape pen cartridges and grams of concentrated cannabis. The medicine was returned, due to lack of evidence, to SocalPURE, Inc and several of its patient members waited with trailers at the San Diego County Sheriff's Regional Crime Laboratory in the Clairemont area on San Diego to pick it up.

It was a tense half hour while Laura Sharp and her son Nelson, the two charged in the raid of SocalPURE, a non profit mutual benefit corporation, disappeared behind an overhead door and inventoried the cooperative’s belongings with the sheriff deputies.  The NBC cameraman had been instructed not to film inside the facility and the reporter, Artie Ojeda was skeptical that the sheriffs would even release the medicine. He waited with us anyway.

As I sat there, my back to a concrete wall, waiting for the two recently-freed defendants to emerge with the first load of property, I recalled the Felix Kha case Americans for Safe Access fought and won against the City of Garden Grove in 2005. The City lost the fight to return Kha’s cannabis property and then was required to pay Kha’s attorney fees at the end of a legal fracas that lasted years and cost the city millions.

At that time, Garden Grove seemed a city in embarrassment to me. I thought it surely could not be long before law enforcement stopped confiscating medical cannabis from patients if they end up having to give it all back. Inarguably, the police will NOT like giving back evidence, they will stop taking it.  They didn’t and here I am again wondering if this huge return of property today marks the end of smash and grab style raids in San Diego.

One would hope, as Laura Sharp said in an interview in front of a trailer loaded with grow equipment, computers and all that medicine, that testing cannabis cooperative legality be done by knocking and conducting an examination of the cooperative’s books.  Not by a scary raid involving assault rifles, seven hours in handcuffs and thousands in legal fees. All culminating in dropped charges, a trip to the crime lab and egg on the face of Bonnie Dumanis, San Diego’s District Attorney who is responsible for these dangerous and expensive assaults.

If San Diego looks foolish because of this costly raid and ultimate return of the confiscated property, I blame Dumanis.  Landy Spencer-Daly the Deputy District Attorney who was at the raid, handled the case and then dropped the charges against Laura and Nelson Sharp, apparently did not gather enough evidence to move the case forward.  If not cannabis, what was Dumanis office looking for as evidence to convict?  Signs of profit making? Why conduct an investigation with a team of armed men and not an accountant?  An accountant would not have been a threat to public safety, as this raid was, is far less expensive and would have exonerated Laura and Nelson immediately.

Shortly after Laura, Nelson and attorney, Matthew Shapiro exited the Sheriff Crime Lab the overhead door was raised and the cooperative members were free to load a dozen pallets of boxes and electronics along with large brown bags of cannabis. The sheriffs were cheerful and had one rule, please don’t point your cameras past the overhead door, he told the ten of us all pointing cameras at him.

After some discussion between Mr. Shapiro, an Associate Attorney at the Law Offices of Michael E. Cindrich, who did an amazing job keeping us all safe, and reporter, Artie Ojeda, the cameraman was allowed to stick his lens in a big bag of meds and Laura was cleared to go on camera and talk about her ordeal.

Laura, whip-smart, kindhearted with a beautiful smile told her story and what it felt like to be persecuted for her choice of medicine.  She said “I don’t like Oxycontin but I do respect people’s choice to use it and I wish for the same respect for my choice of medicine.”  I was so proud and honored to be there as this lovely mother and son made history together.

It turned out well for Laura and Nelson Sharp and the North County cooperative. I join them in hoping this is the beginning of the end of terror on medical cannabis patients in San Diego County. It appears law enforcement is not on board with the District Attorney at all.  Incumbent Dumanis failed to get endorsements from 90 percent of the county’s law enforcement agencies in her recent campaign for DA.

Notably, there is a California bill going through the legislative process which, if passed, would help other medical cannabis patients regain their property. SB-1193, among other things, requires that medical cannabis or plants wrongfully confiscated be returned or that the owner be paid reasonable compensation. ASA supports this bill, which if adopted, will codify ASA's return of property victory in Garden Grove v. Felix Kha.

To take action on this and other medical cannabis bills, please visit Americans for Safe Access Action Alert Page. Also VoteMedicalMarijuana.org, gives American voters a new criterion to evaluate candidates based on their legislative records on medical marijuana policy.

We thank Laura and Nelson Sharp and the attorneys who defended them for staying strong and fighting for the rights of medical cannabis patients in San Diego, and, Artie Ojeda of NBC/7 News who waited patiently and gave them very good coverage.