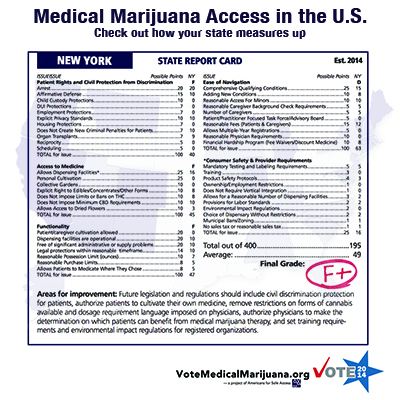 With Monday's signing of New York's medical cannabis law, there are now 23 states with comprehensive medical cannabis access programs for patient's living in those states, but the rights of legally recognized medical cannabis patients and their ability to access medicine is varies greatly from state-to-state. In an effort to improve each of how each of these laws facilitate medical benefit across the country, ASA developed a grading scale for evaluating the laws and regulations applying to medical cannabis in each state.

In a report released Monday, entitled Medical Marijuana Access in the U.S.: A Patient-Focused Analysis of the Patchwork of State Laws, ASA has graded each of the laws and regulations of each of the 23 medical cannabis state, as well as for each of the 11 CBD-only laws passed this year. The grading is broken down into four categories: Patient Rights & Civil Protection from Discrimination; Access to Medicine (Cannabis and/or Cannabis Products); Ease of Navigation; and Functionality (Effectiveness of current program). Each category looks at several components of the laws and regulations to generate a 100-point score. State's received a letter grade based on their average score.

The components of each category were developed as an extension of ASA's Legislating Compassion and Regulating Compassion guides. ASA created these guides as a means for lawmakers and regulators to keep the patient's needs in at the forefront of the creation and implementation of a medical cannabis program. Too often, politicians boast that the medical cannabis law they just passed is "the most restrictive in the country." Instead, ASA feels that the best medical cannabis laws are the ones that improve the lives of the greatest number of patients, by avoiding needless burdens on physicians and imprudent restrictions on providers that make it difficult for patients to acquire their medicine. With each grade ASA assigned to a state, we have also offered areas within the law and regulations that must be addressed to better improve the lives of patients.

Unfortunately, no states are currently receiving an "A" letter grade. The strongest programs in the country fall short in some pretty significant ways. For example, states such as Maine and Rhode Island earned "B's" by doing well in most areas of the law, but both impose restrictions on what conditions a physician can recommend for, rather than allowing a physician to determine which patients could benefit from medical cannabis therapy. California, which earned a "B-" and allows physicians to recommend for any condition for a which a patient could benefit from medical cannabis, but faltered due to the absence of civil discrimination protections for patients and the lack of statewide consumer safety and provider requirements.

On the other end of the spectrum, most of the CBD-only laws received very low "F" grades, due to their extremely limited or precarious access they create, and their counterproductive limits on THC that will limit the usefulness of the CBD products that patients may use. In the middle were most of the rest of the medical cannabis states, which largely earned grades of "C" or "D." Some of these grades, such as New Jersey and Montana, will likely remain low for the foreseeable future unless significant legislative fixes are made to these programs. However, states that have passed laws since 2012 will likely see their grades raised once sensible regulations are adopted and dispensaries become operational in the near future.

Every state that has passed either a medical cannabis or CBD-only law deserves at least some measure of credit for attempting to bring access to cannabis-based medicine to patients in need living in their respective states. But passing one of these laws is not merely a box to check off and then forget about, and an attempt to draft the most restrictive bill possible may result in the legislation being merely symbolic from an implementation standpoint. As we saw in Maryland this year, it is entirely possible for a state to improve their medical cannabis laws from symbolic to functional just one legislative session, but it take will and guidance. This report will help provide the guidance, it is now up to patient advocates to do our part to make sure lawmakers and regulators have the will. For tools on how to engage lawmakers and regulators, please visit ASA's Advocacy Training Center section of the website for tips and tactics.