What led Lisa Sublett to medical cannabis were the health issues she faced after the birth of her last child. Research was part of her career path in corporate marketing, so she set about investigating her options.

She soon found a YouTube video of a man with Parkinsonism that showed him trapped in his condition. She could see the suffering in his eyes, but also his intelligence. Then he took cannabis, and the video showed him now walking, talking and driving off.

“This was cannabis!” Lisa says. “I was totally incredulous. I didn’t believe it.”

But Lisa’s research continued, and she came to believe that millions had suffered needlessly because cannabis was not an option. She turned then to finding out who was working on this issue and started to reach out to others.

The group in her state of Kansas that she started out with six years ago turned to advocacy for full adult-use access, but Lisa wanted to achieve access for patients first. 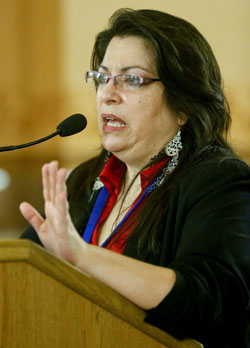 “In my business career, you had to know your audience, so I applied that approach to this,” she says. “The target for persuasion in Kansas is a conservative voter, so we needed a professional, data-driven, evidence-based approach. My role models were ASA and Steve DeAngelo.”

Lisa is not opposed to cannabis culture, but she decided to steer clear of marijuana leaf icons and other imagery that might have counter-productive associations for the people she needed to convince.

Unlike most states, Kansas allows private citizens to write and submit bills to the legislature. Lisa and Bleeding Kansas Advocates have submitted medical cannabis bills, the Kansas Safe Access Act, in both the Kansas state House and Senate each of the last three years and gotten stalled in committee. After three years of no hearings in either chamber, last year legislators asked for an interim committee to study the issue over the summer, but that was denied.

Lisa and other advocates were promised a hearing this session but never got it, so last month their 116-page bill was brought as an amendment to another measure by Rep. Cindy Holscher,

a champion in the state house. During debate, many lawmakers shared personal stories of support, pushing the amendment to within eight votes of passage. Many who voted no said they supported the bill but wanted a more complete process rather than as an amendment.

The effort got press and political attention, and local public television will be airing a show on medical cannabis in Kansas soon.

Shortly before that, lobbyists for a biosciences firm had convinced a pair of Kansas lawmakers to introduce a hemp-based CBD-only bill, but after researching the company and the limits of the proposed law, advocates successfully mobilized against it, sure that it would block any meaningful legislation from passing in the future.

For now, Lisa and Bleeding Kansas Advocates are turning attention to the June 1 candidate filing deadline, which will be the start of gathering information for their voter’s guide. Then will come voter registration and planning for the next legislative session. Rep. Holscher may be a sponsor of a revised bill, but with bipartisan support and new visibility for the issue in the state, a medical cannabis bill is destined to be resubmitted.