Doug Rice, a retired firefighter and paramedic in Utah, became a medical cannabis advocate on behalf of his 26-year-old daughter, Ashley. She was in her mid-teens when she had her first drop seizure at school. Gradually they increased in severity and frequency until she was experiencing a dozen grand mal seizures each day. 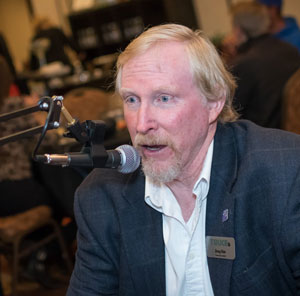 Ashley’s epilepsy is part of an extraordinarily rare genetic condition called PURA Syndrome that results from a chromosome malformation. The condition has been identified in fewer than 500 people worldwide.

As Ashley’s seizures escalated, Doug, like so many parents of children with seizure disorders, started investigating using CBD extracts to control them. The neighboring state of Colorado provided options for investigating various cannabis medicines. Pure CBD extracts initially reduced Ashley’s seizures from a dozen a day to a couple, but then the seizures came back up to a few a day. They discovered that a 10:1 CBD:THC ratio medicine produced total seizure control.

That convinced Doug to advocate for making these types of medical cannabis products available in Utah.

“I already knew cannabis was relatively safe,” says Doug. “In 30 years as a paramedic, I’ve never seen a person OD on it.”

Doug lobbied state lawmakers in 2014 on behalf of the CBD bill that was eventually passed, and pushed for more access. In 2016, he worked on Senate Bill 73, which would have expanded Utah’s program, but after passing the state senate, the bill died in committee in the assembly.

After that, Doug and other advocates decided to change their approach.

“We had to do something ourselves because the legislature won’t act,” Doug says.

That led them to draft a citizen initiative to fix the state program’s shortcomings and gather signatures to place it on the ballot. Proposition 2 passed with 52.75% of the vote, despite opposition from the Mormon church. The proposition never took effect because lawmakers stepped in to replace it with a complex bureaucracy of tight controls that will limit access.

“This new bill is ironic because our state prides itself on small government,” says Rice. “As a registered Republican, I do, too, but this creates just the opposite.”

In addition to his advocacy work on medical cannabis, Rice has served in leadership positions for the Epilepsy Association of Utah. He became vice-president of the organization in late 2016, and last year became state president through July 2019.

“It’s been incredible working with the Epilepsy Association,” Rice says. “I’ve had my eyes opened. I felt pretty lonely on capitol hill, but I’ve been impressed by what can be done with citizen lobbying.”

When he was working on the state’s CBD-only bill, known as Charlee’s law, in 2014, he got to see the power of concerned Utah parents in action.

“Those conservative “Mormon mommies” – that’s what they call themselves -- take no quarter,” he says. “Here I was a big tough firefighter, but these moms were able to get more done than I could.”

Rice is disappointed that state lawmakers have watered down the legislation he and other patient advocates worked so hard to get passed, but he’s determined to continue working with ASA-affiliate TRUCE and the Utah Patients Coalition, which spearheaded the initiative drive.

“Our work is not done,” he says