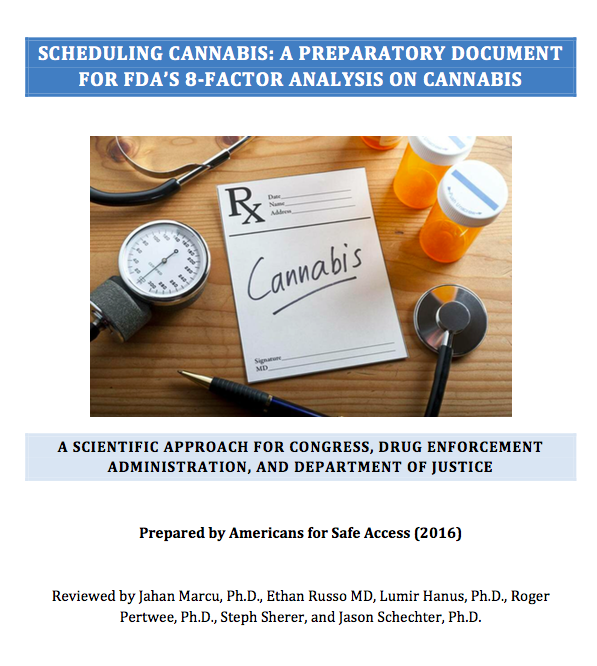 Today, over 300 million Americans live in states with some kind of law allowing for the use of medical Cannabis. However, since the passage of the Marihuana Tax Act of 1937, federal laws and regulations surrounding the medical use of Cannabis have been based on politics rather than science. For this reason, Cannabis remains a Schedule I drug under the Controlled Substance Act (CSA). Not only does this Schedule I classification regard Cannabis as having no accepted medical use, but it also acts as a barrier towards the opportunity for research on the many potential health benefits of medical cannabis.

According to the CSA and the Food and Drug Administration’s (FDA) requirements for rescheduling a drug and recognizing its medical utility, there is more than sufficient scientific information available to begin the process of rescheduling Cannabis in the United States. For years, efforts to reschedule Cannabis based on medical and scientific information have consistently been stymied by the Drug Enforcement Administration (DEA).

In April of this year, the DEA reported to Congress that they will be issuing a response to yet another rescheduling petition by mid-year 2016. This is an ideal opportunity for the DEA to move Cannabis to a less restrictive schedule (or remove it from the CSA entirely). The CSA requires an 8-Factor analysis from the DEA for all scheduling, or rescheduling, decisions. For the purpose of showing the DEA the wealth of knowledge available on the medical benefits and low risks of medical cannabis, Americans for Safe Access (ASA) have created their own 8-Factor analysis.

The 8-Factor analysis is not a formal petition to reschedule Cannabis, rather it is a guide for addressing the government’s requirements for rescheduling and regulating Cannabis as a safe and effective medicine. The analysis presents the CSA and FDA requirements for demonstrating the medical value of legitimizing Cannabis as well as the major public health impact it can have towards the many patients it helps. Within the analysis is a critical review of the abuse, dependence, medical use, and standards being implemented to regulate medical cannabis programs in the United States.

The 8 Factors Analyzed Include: