Bipartisan support in both the House of Representatives and Senate is propelling new federal measures to support medical cannabis research.

The House approved an infrastructure bill last month that includes a provision that directs federal agencies to develop ways to allow researchers in all 50 states to obtain cannabis from licensed commercial businesses. The INVEST in America Act directs the Department of Transportation to work with the Department of Health and Human Services and the Department of Justice to develop recommendations for allowing interstate transport of the research cannabis everywhere in the U.S. The agencies would have two years to develop a plan for creating a “national clearinghouse” of cannabis strains and products for research study. Their report is also to address the “statutory and regulatory barriers to the conduct of scientific research.”

In the Senate, the language from the Cannabidiol and Marihuana Research Expansion Act has been introduced as an amendment to the National Defense Authorization Act. Sponsored by the Republican and Democratic leaders of the Judiciary Committee, Sens. Chuck Grassley (R-IA) and Dianne Feinstein (D-CA), with co-sponsorship by Brian Schatz (D-HI), the provision would remove barriers to cannabis research, as well as provide explicit protections to physicians who recommend it to their patients.

What has been a highly restrictive medical cannabis program in Louisiana is being expanded with a trio of new laws. Lawmakers approved a bill that will allow physicians to recommend cannabis to treat any “debilitating” medical condition as of August 1. Cannabis businesses may also be able to access more financial services, as separate legislation was enacted that prohibits state banking regulators from penalizing banks and credit unions for working with the industry. Lastly, physicians and medical centers will be explicitly protected by state law for recommending cannabis or working with patients who use it.

COVID-19 has presented substantial problems for activists gathering signatures to qualify state initiatives, but voters in several states that currently have very restrictive cannabis laws will have the chance to decide them, nonetheless.

In Nebraska, one of the most restrictive states in the nation on cannabis law, activists with Nebraskans for Medical Marijuana filed initiative petitions with 182,000 signatures last month. To qualify, 121,669 signatures need to be verified as registered voters by the secretary of state. If the constitutional amendment makes the ballot and voters approve, physicians would be able to recommend cannabis for any “debilitating condition” and qualified patients would be allowed purchase and cultivate cannabis. State lawmakers have been stymied in their attempts to pass similar legislation, so they have helped take the question to voters.

In South Dakota, activists with New Approach South Dakota qualified a medical cannabis initiative back in December 2019. If enacted, the law would allow licensing of dispensaries and personal cultivation of three plants by qualified patients, as well as recognizing out-of-state patients. Activists are currently encouraging supporters in the state to file for absentee ballots to ensure they have a chance to vote on IM 26 in November.

In Mississippi, voters will decide on two medical cannabis initiatives. Mississippians for Compassionate Care qualified a medical cannabis initiative in January that, if enacted, would allow patients to qualify under 22 serious medical conditions, including chronic pain and PTSD. In March, state lawmakers put a more restrictive measure on the ballot to compete with it. The legislature’s initiative would not enact a program but merely direct lawmakers to take up the matter in 2021.

ASA is partnering with Mindbuzz and Tetragram to host a free webinar on July 10th at 10 am PST/1 pm EST called “Take Control of your Medical Cannabis Journey with Journaling.” The webinar will include a behind-the-scenes look at Tetragram’s new journaling app, as well as two medical cannabis patients sharing their journeys and conversation with a panel of experts, followed by a question and answer session.

Registration for this free webinar is available at bit.ly/CannabisJournaling.

Did you know ASA membership can be as low as $5 a month or $35 a year? Membership dues keep Americans for Safe Access running, and ASA’s chapters and volunteers help us make a national impact. 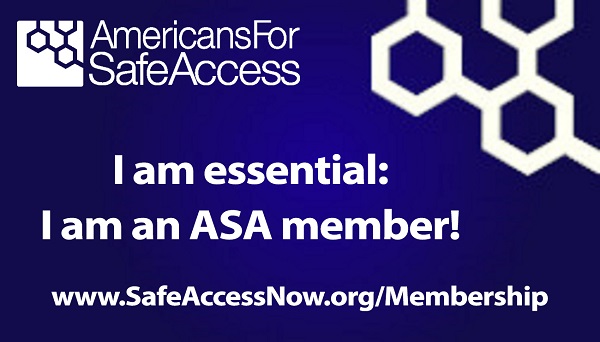 We want to do our best to demonstrate our gratitude to our members and supporters. That’s why we’ve recently adopted a few improvements to our membership program. The tag line “I am essential: I am an ASA member!” is now on every new card, because without our members, we could not do the important work we do to keep cannabis viewed as an essential medicine across the country.

If you are not currently a member, please take a moment to check out the new benefits and sign up to one of our new levels. (if you do not have a membership card, you are not a member.)

ASA continues to support essential workers in the cannabis industry with free memberships for individuals and companies.

“If your business is open, no matter what you do, you and your employees are welcome to sign up for our free membership,” said ASA Director Debbie Churgai.

What’s in a name? Marijuana, Cannabis, and Hemp

As with all things involving social controversy, dispute over what to properly call the plant known by the botanical name Cannabis Sativa L. comes with the territory. Check out our newest blog that explores the history of the words marijuana, cannabis, and hemp and the stigmas historically associated with these words at www.safeaccessnow.org/cannabis_blog.

The blog is an adapted excerpt from the award-winning book, The Medicalization of Marijuana: Legitimacy, Stigma, and the Patient Experience by Michelle Newhart and William Dolphin. 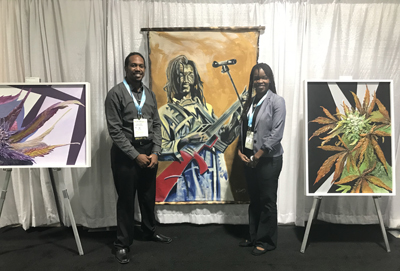 Art was the point of entry into cannabis advocacy for Erik Range. In 2015, after a trip to Colorado, where he saw the expansion of the cannabis industry, Erik began wondering how, as a minority, he could take part in the economic benefits. His solution was Art420, a company that uses fine art exhibitions to challenge cannabis stereotypes. He put on shows a couple of years in a row, including one in the Florida state capitol and pop-up shows in California.

“As I was promoting the exhibitions, I quickly realized that minorities were not participating,” says Erik. “They weren’t at conferences, weren’t at events, not part of the conversation.”

In his second year, he used the art shows as a platform for outreach with a “Black Market Brunch” that brought in experts to educate community members. While he was promoting that event, someone who attended suggested to Erik that he connect with Roz McCarthy, who had just started the group Minorities for Medical Marijuana. It turns out they live in the same city, and, in September 2016, Roz asked him to serve as chairperson of the organization’s board.

With Florida voters soon to decide on Amendment 2, a citizen initiative to expand medical access in the state, that became the focus of their organizing efforts. Once it passed, they were making the four-hour drive from Orlando to Tallahassee once or twice a week to participate in shaping the rules for implementation in the state. 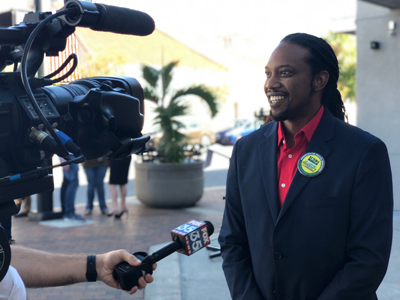 “As much as we wanted to talk to state officials about social equity issues, it was a nonstarter in Florida at that time, so we focused on diversity,” Erik says. “We coauthored language now in the law to include diversity requirements for equity, staffing and contracts.”

After that initial success, Erik and Roz saw their organization explode seemingly overnight. From a handful of volunteers, in just a few months they expanded to 15 chapters nationally. Now, there are 24 U.S. chapters and ones in Toronto, Jamaica, and London.

“It was an amazing experience working with elected officials helping to craft laws that allow minorities to participate,” Erik says.

From there, they turned their attention to work in Black and Latinx communities, hosting forums on medicinal cannabis efficacy and boot-camps on licensing. In 2019, they travelled to Illinois, New Jersey and Missouri to put on workshops on licensing and business practices for sustainability. Since the onset of COVID-19, they’ve switched to virtual events, with one scheduled for the end of this month for Massachusetts, which for the next two years will only offer delivery licenses to social equity applicants.

“We’re working to help Black and brown communities overcome barriers,” says Erik. “We’re bringing attention to the lack of diversity in many areas of the industry, training suppliers and educating businesses on closing that gap.” 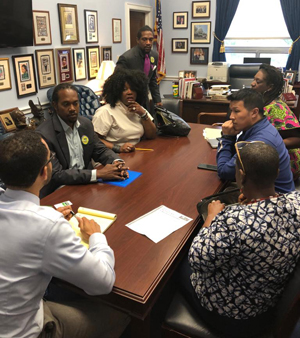 Some barriers are structural, Erik notes, pointing to the differences in how Florida regulates medical cannabis and hemp. Erik serves on Florida’s industrial hemp committee.

“Florida’s medical licenses are limited in number and require vertically integrated operations from cultivation to manufacturing and transport, which cuts people out who don’t have the experience or capital to cover all operations,” he says. “It’s a night-and-day difference on the hemp side -- the state has taken an open-market approach, with no cap on licenses and no application fee. If you meet the requirements, you get a license.”

Achieving social equity is more than just giving a license to operate to members of communities that have borne the brunt of cannabis prohibition. The community outreach and education Erik has been engaged in is aimed at addressing the underlying social effects.

“We’ve got to expand our view of equity and create structures for success in Black and brown communities,” Erik says. “That means affordable legal services, access to low interest loans and capital, and using taxes to rebuild the infrastructure that supports communities.”

In Erik’s view, that work starts with education, bringing trusted sources to speak with stakeholders to build community and political capital.

“To reframe the conversation, we have to recognize the stigma,” Erik says. “We need to recognize how close people are to the war on drugs, how many ills it has created.”

The world lost a pioneering physician and cannabis activist last month. Lester Grinspoon, M.D., passed away June 25th, 2020. An outspoken advocate for rational cannabis policy for nearly 50 years, Dr. Grinspoon, a professor emeritus of psychiatry at Harvard Medical School, authored more than 140 articles in scientific journals and twelve books, including Marihuana Reconsidered, and Marijuana, The Forbidden Medicine (coauthored with James B. Bakalar).  Published in 1971, Marijuana Reconsidered was a breakthrough book about the plant's benefits that inspired renewed scientific interest and a generation of advocates.

Our thoughts are with his family and loved ones. 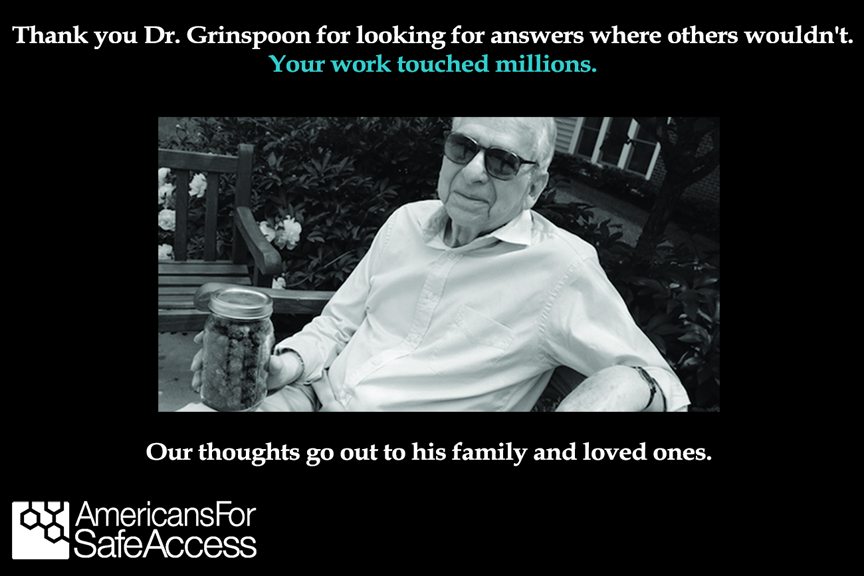 ASA needs your help compiling info on safe access in your state. Each year, ASA’s State of the States report analyzes medical cannabis programs throughout the U.S. on how they are serving patients. ASA is asking medical cannabis patients and caregivers to complete a short survey on how well their state is doing.

We are adding new data to this year's report based on new questions such as this one:

Over the past several years many states have organized policy reforms designed to prioritize licensing of minority-owned establishments as part of ongoing efforts to expand legal retail access. In your opinion have a sufficient number of minority cannabis business licenses been issued by your state to accommodate patient demand?

This information will help ASA identify gaps between laws and regulations and the experience of patients in the state. Complete the short survey today at www.safeaccessnow.org/2020survey. 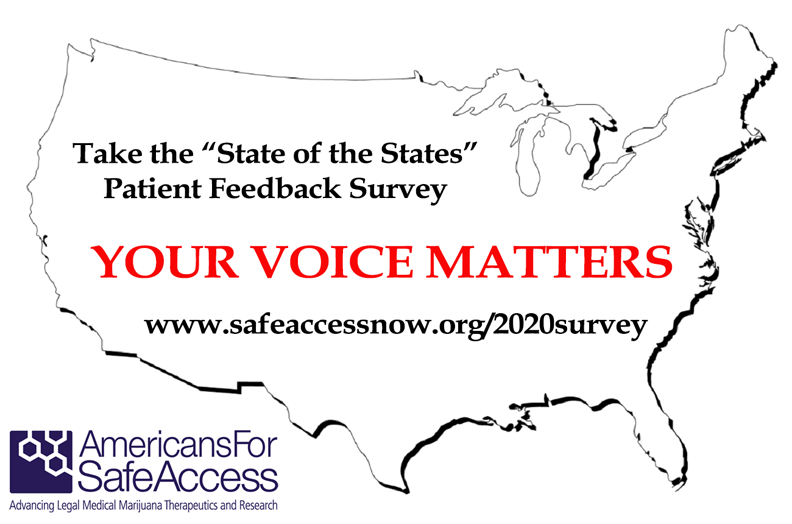