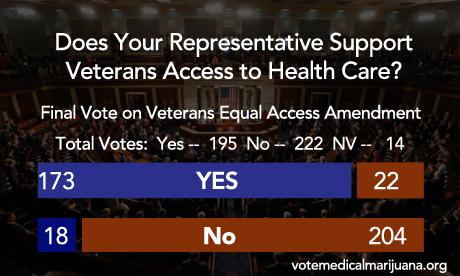 Yesterday, Congress narrowly defeated an amendment to the House Military Construction & Veterans Affairs & Related Agencies Appropriations Act (HR 4486) by a vote of 195-222. The "Veterans Equal Access Amendment," offered by Reps. Blumenauer (D-OR), Farr (D-CA), and Rohrabacher (R-CA) would have allowed Veterans Affairs (VA) physicians to fill out written recommendations for medical marijuana to veterans patients they feel could benefit from it in states where medical marijuana is legal. Unfortunately, Congress voted to deny expanded access to health care for military veterans; as many veterans rely on the VA for all of their medical care and may have to pay out of pocket to see non-VA doctors, adding expense and burden to veterans living with chronic pain, PTSD, and other scars of battle.

However, the vote was a historic milestone, as a record 195 Members of Congress voted in favor of medical marijuana access. Previously, the only floor votes on medical marijuana have taken place during the Commerce, Justice, Science, and Related Agencies appropriations bills, in the form of an amendment to prevent the Department of Justice from interfering with state medical marijuana programs. That amendment had been offered several times from 2003-2007, and again in 2012, but never received more than 165 votes in favor. Also notable about yesterday's amendment, freshman House Members voted in favor of it by a total of 44-35.

To help keep track of how your Members of Congress are voting and sponsoring federal medical marijuana legislation, ASA has relaunched its Vote Medical Marijuana site. The interactive site contains Members' medical marijuana voting track record since 2012, as well as the legislation they have sponsored or cosponsored during the 113th Congress (2013-2014).  You can check out how your Representative voted last night, and you can use the following action alert to "spank or thank" your Rep. based upon their vote yesterday.

As Congress continues to introduce and vote on new medical marijuana legislation, Vote Medical Marijuana will be updated so that grades include the most recent bills and actions, and a Congressional member survey will be added as well. Tools like this can help keep the pressure on Congress to vote in favor of patients, because they will know that the public is watching to see if they truly support medical marijuana legislation. We encourage you to use this voting guide throughout the election year and beyond.