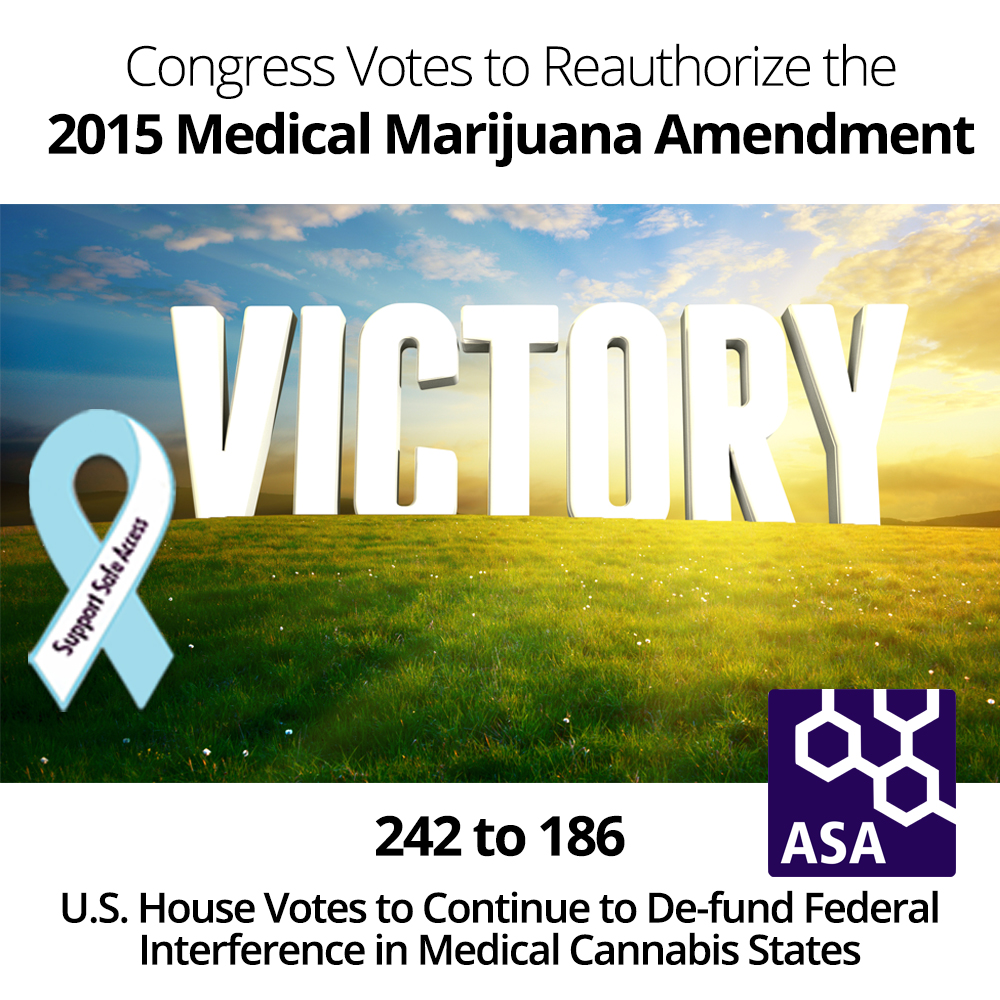 In a historic day for federal medical marijuana reform, the US House of Representatives voted today 242 to 186 in favor of reauthorizing the Rohrabacher-Farr Amendment, which prohibits the Department of Justice from interfering with state medical marijuana programs and the patients who rely on them. This year's amendment had six Republican and six Democrat cosponsor - Rohrabacher (R-CA), Farr (D-CA), Ribble (R-WI), Lee (D-CA), Massie (R-KY), Blumenauer (D-OR), Heck (R-NV), Cohen (D-TN), Young (R-AK), Polis (D-CO), McClintock (R-CA), Titus (D-NV) - and included 39 states, along with the District of Columbia and Guam.

The victory was historic because it represented the largest vote total ever in support of federal marijuana reform in Congress. Last year, an anti-marijuana banking amendment offered by Rep. Fleming (R-LA) was soundly defeated 186-236 and at the time was the best showing to date in support of ending the federal war on state marijuana laws. This year's Rohrabacher-Farr vote had 23 more AYE votes than last year's version and notably had 18 more Republicans voting for it, a 33% increase from last year, while additional Democrat Reps voted AYE for a total of 175-10 within their party.

Amendment sponsor Sam Farr had the following to say in a press release following the vote:

“The majority of the states have said they want medical marijuana patients to have access to the medicine they need without fear of prosecution,” said Rep. Farr. “For the second year in a row, the people’s house has listened to the will of the people and voted to give them that access.”

“This impressive vote,” said Rep. Rohrabacher, “is deeply gratifying. It shows the people’s representatives really can reflect the overwhelming sentiment of Americans to do the right thing.  Too many patients, for too long, have suffered under a regime that encourages doctors to prescribe opiates rather than the cannabinoids they deem much safer and more effective. It’s the federal government and out-of-control Justice Department enforcers who have acted as the real gateway drug. The good news is that the House of Representatives just took away that deadly connection.”

Today's victory also shows that there is genuine and widespread support for ending the crackdown on state medical marijuana laws, which means that the CARERS Act is quite viable in the House of Representatives. Originally introduced in the Senate by Senators Booker (D-NJ), Paul (R-KY) and Gillibrand (D-NY), the House version of CARERS was introduced in March by Rorhabacher-Farr cosponsors Steve Cohen and Don Young, but has yet to get a committee hearing. The CARERS Act would once and for all allow state legal medical marijuana activity to be free of federal interference, while also advancing research, CBD access, banking services for dispensaries, and veterans access to recommendations through the VA. The vote today on Rohrabacher-Farr suggests that CARERS would likely pass if brought to the House floor for a vote. You can take action to support CARERS by clicking here.

The Rohrabacher-Farr Amendment will still need to be adopted by the Senate and signed by President Obama before it extends the spending prohibition on DOJ, but the conditions look strong for Senate approval. In May, the Senate Appropriations Committee approved the Veterans Equal Access Amendment, offered by Senators Daines (R-MT) and Merkley (D-OR), and was adopted with a committee vote of 18-12. Advocates will be working for a similar outcome with the Rohrabacher-Farr Amendment when the Senate Appropriations Committee takes up the CJS budget bill in the weeks to come. The current prohibition on DOJ will expire at the end of September, and full passage of this year's Rohrabacher-Farr Amendment would extend the protection for another 12 months to the end of September 2016.