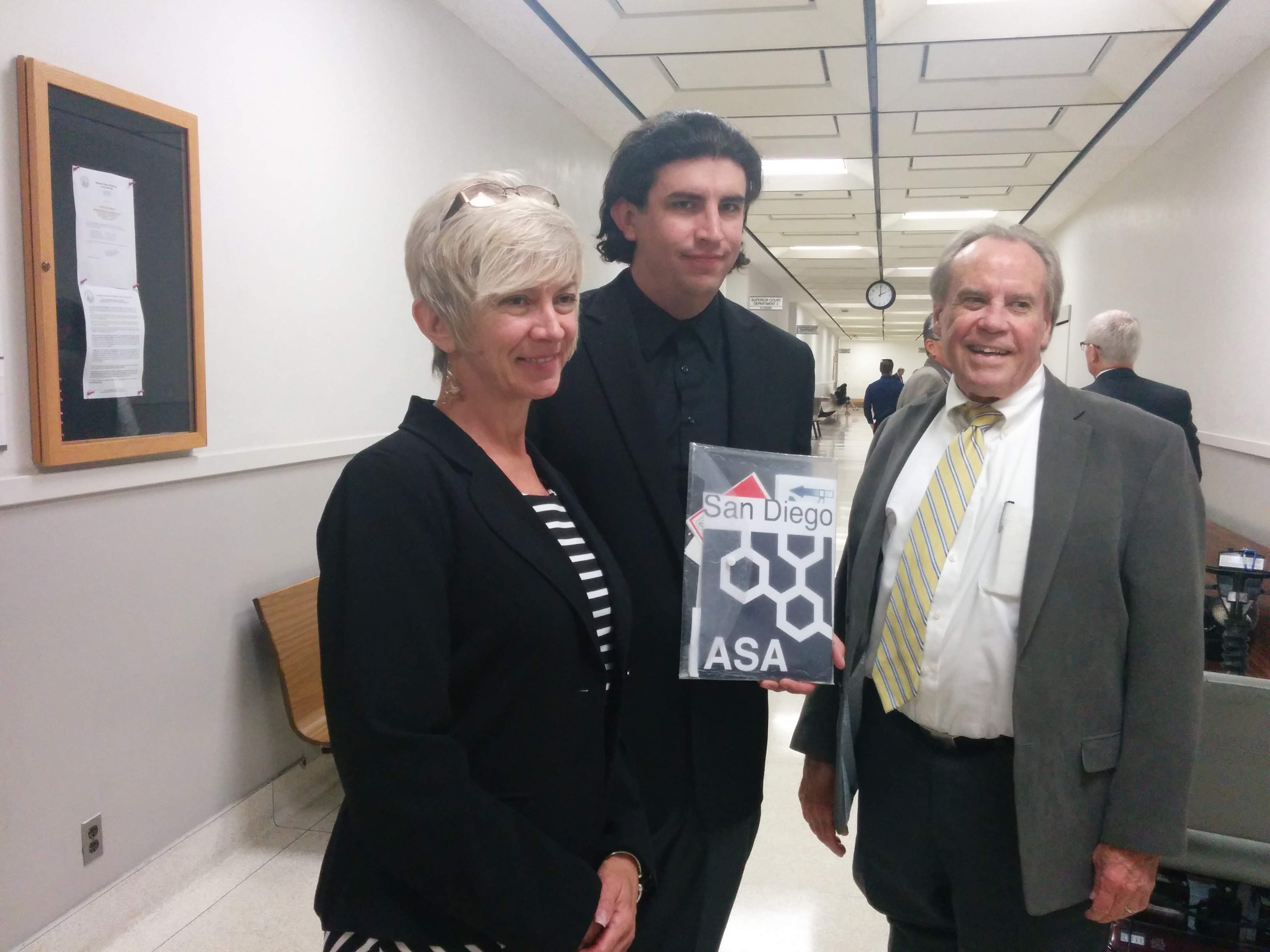 San Diego, CA – I wrote about medical marijuana patient defendant Alexander Ayres last month as he took a very good plea - when balanced with the consequences of a trial - in his marijuana transportation charge. The plea was negotiated by Alex’s attorney Michael J. McCabe early last month and offered by Landy Spencer-Daly, a prosecutor with the San Diego District Attorney’s northern office in Vista.  Ms. Spencer-Daly has been dropping charges and offering summary probation plea deals in medical marijuana cases all week.  In early April she also stood in for prosecutor Brock Arstill in the Deborah and Dennis Little case and made a concession to a jury question that was fair but certainly not required of her. It’s a welcome change to the battering medical marijuana patients usually get in all things court-related and I hope it continues.

Yesterday, when Ms. Spencer-Daly was to argue against the motion Michael McCabe filed, she didn’t even show up but handed the case off to the duty prosecutor assigned to the courtroom. The motion will allow Alex to use his medical cannabis while serving the summary probation term under the plea he had just signed with Ms. Spencer-Daly and it was successful.  The defense came armed with a letter from Alex’s doctor, Bernard Smyle MD, saying that the pharmaceutical drugs typically used to treat Alex’s ADD had been harmful to him and in the doctor’s medical opinion marijuana was the best treatment option for his patient.

The prosecutor, out of his element, said he would submit to the court on the motion but then went into a long diatribe about the alleged seriousness of the crime of transporting medical marijuana. The Judge - who had just been treated yesterday to cheers from supporters as Ms. Spencer-Daly dropped charges against two patients in two different cases – read the defense motion and the doctor letter and said he was skeptical but he wished to give Alex Ayres the benefit of the doubt. Judge Carlos Armour wrote out a minute order which stated:

Deft. will be allowed to use medical marijuana as prescribed by a doctor during the term of his probation.

This means Alex was arrested, spent nine days in jail and retained an attorney at great expense, yet his only remaining consequence ultimately is a court-sanctioned pass to use the same medicine he was originally charged with possessing. It’s a victory of course but bittersweet and I believe this is something District Attorney Bonnie Dumanis does not want San Diego citizens to know.  One wonders at the cost and idiocy of wasting money harassing medical marijuana patients only to have judges unravel the district attorney’s punishment.  We have seen at least five cases where defendants get court orders forcing the probation department to allow medical cannabis use. I know there are hundreds more using medical cannabis on probation and we’ve heard a probation officer testify to as much at a recent sentence hearing. It is very common for medical marijuana defendants to ultimately end up with the court’s ok to use the medicine that landed them in court and it is time for Dumanis to stop playing political games with peoples’ lives and freedom.

While I am glad Alex’s nightmare is over and he will be allowed to treat his ADD with a medicine that doesn’t make him suffer as did the pharmaceuticals; he should have never been arrested or charged in the first place.  Alex is a legal medical cannabis patient with a doctor recommendation but he also happens to be young.  As such, he was targeted as a drug user, his medical marijuana doctor recommendation was not honored and he was arrested and put into to custody for nine days.  This is a tragedy.  How do we protect our young people from this sort of targeting by prohibitionist profiteers such as Bonnie Dumanis and many law enforcement agencies? 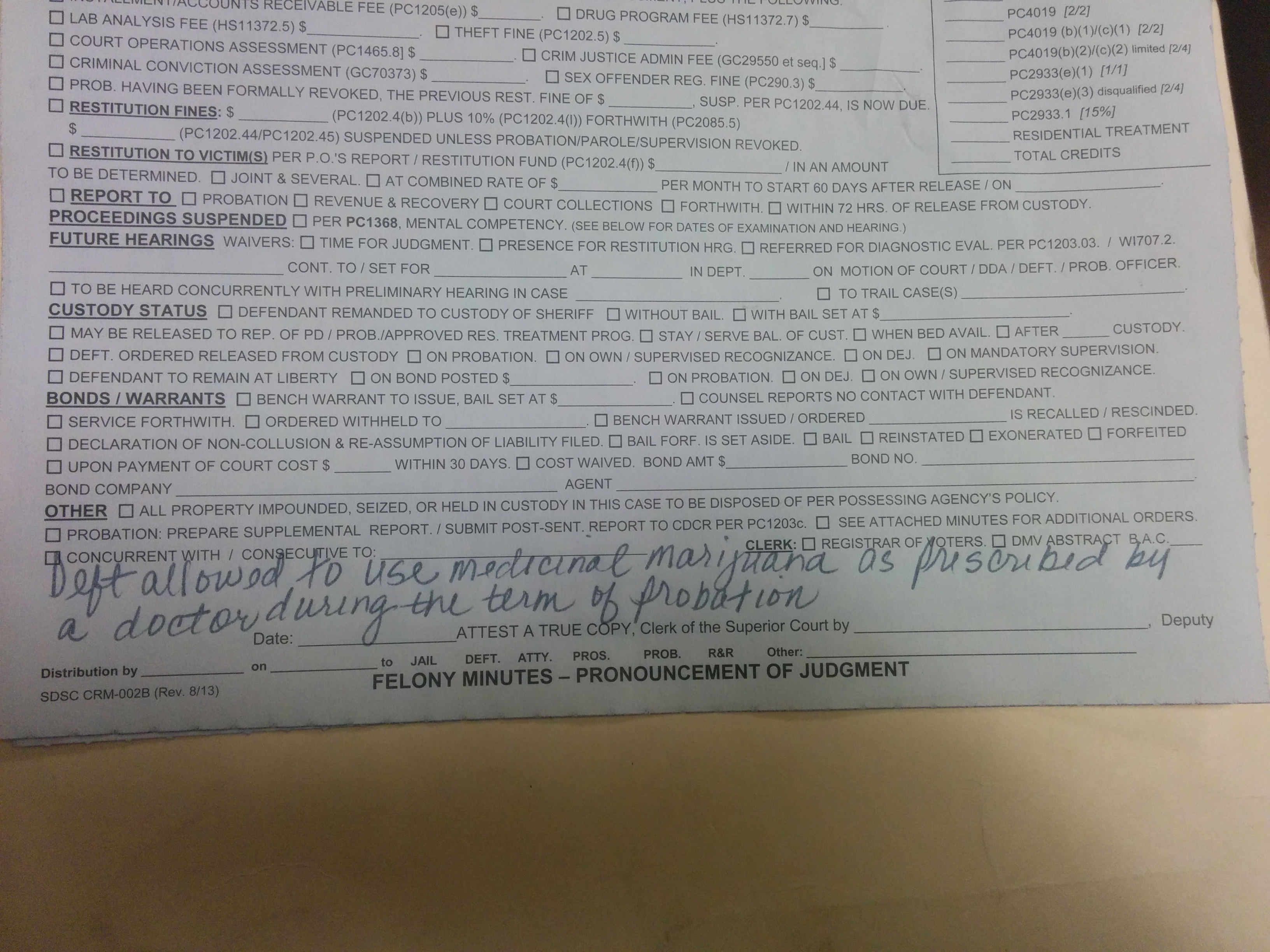 Thankfully Alex is strong but if this had happened to a young girl who was more fragile it could affect her for the rest of her life.  Dumanis must be held accountable. She will be running for her seat in June this year and her opponent Bob Brewer has promised clear guidelines to the community for police to navigate these exact patient incidents. Bonnie Dumanis has consistently avoided providing guidelines and prefers to capitalize on the low hanging fruit created by the unclear medical marijuana laws.  Bonnie makes victims out of our vulnerable young people, please don’t vote for her.

Since 2003, Terrie has been a volunteer in harm reduction and drug and prison policy reform in San Diego.  She is an advocate of medical cannabis patients’ rights. Terrie is an Advisory Committee Member of San Diego Americans for Safe Access and is focused on court support and building a bridge between the recovery and medical cannabis communities in San Diego and reducing stigma surrounding the therapeutic use of cannabis.