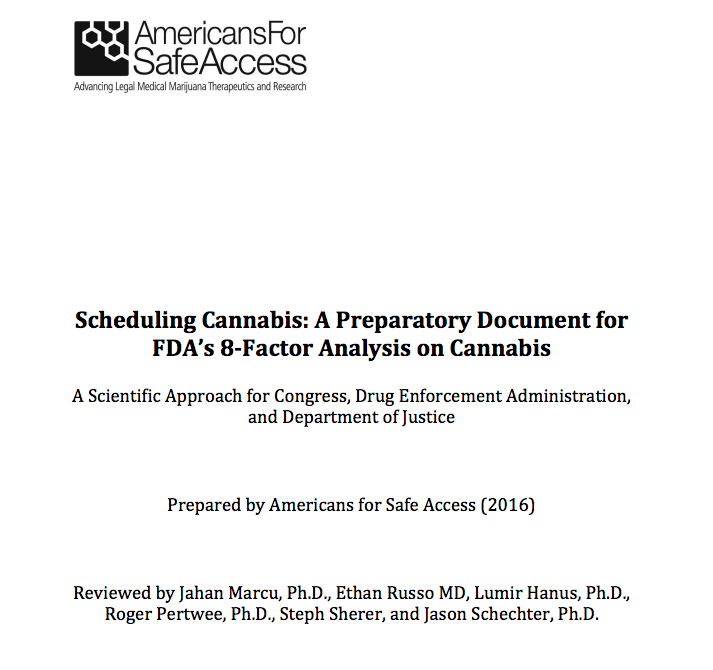 Today, Americans for Safe Access (ASA) disseminated copies of an independent 8-Factor Analysis conducted in support of current petitions requesting removal of cannabis (marijuana) from Schedule I status in the Controlled Substances Act (CSA). The document was sent to all members of Congress, as well as heads of the United States Department of Justice (DOJ), the Department of Health and Human Services (HHS), the Office of National Drug Control Policy (ONDCP), the DEA, and the Food and Drug Administration (FDA).

The Drug Enforcement Administration (DEA) is about to make a very important decision regarding whether or not to reschedule cannabis from its Schedule I status. This decision will have substantial implications for the two million patients that currently have access to medical cannabis and cannabis products under state laws. Cannabis has been listed as a Schedule I substance - defined as a drug with high potential for abuse and no accepted medical use - along with heroin and LSD since the 1970’s. This Schedule I status makes it illegal to grow, possess, use, or distribute under federal law. While many other drugs have been rescheduled, cannabis has stayed in Schedule I for 46 years.

The CSA requires an 8-Factor Analysis from the HHS upon which the DEA makes it determination for all scheduling, or rescheduling, decisions. Although the DEA has not yet issued their report, ASA drafted their own independent 8-Factor Analysis to address the government’s requirements for rescheduling and regulating cannabis as a safe and effective medicine.Previous efforts to reschedule cannabis have been blocked by the DEA, who remain the most the most steadfast in maintaining their opposition to cannabis reform under the Obama administration. While the DEA continues to base their view on the medical use of cannabis on politics and press releases rather than science and the most current research.

The independent 8-Factor Analysis drafted by ASA contains a critical review of the abuse, dependence, medical use, and standards being implemented to regulate medical cannabis programs in the United States, and was written and peer-reviewed by international scientists and experts in the field. The Analysis includes decades of science, both domestic and abroad, that the DEA has previously ignored in its rescheduling analysis, and references to over 550 peer-reviewed scientific articles.

“Our analysis represents the current state of knowledge regarding cannabis, its use, abuse, toxicology, and a review of the standards being implemented to ensure public safety,” stated Dr. Jahan Marcu, Chief Scientist for ASA. “Our review arrives at the same conclusion as DEA Judge Francis Young did in 1988, that this plant in its natural form is ‘one of the safest therapeutically active substances known to man’.”

Patient advocacy groups like ASA, the Epilepsy Foundation, and several others have been appealing to members of Congress to reclassify cannabis for medical use for many years.The Compassionate Access, Research Expansion, and Respect for States (CARERS) Act (S. 683, H.R. 1538), introduced in 2015, which in addition to rescheduling cannabis, would allow states to establish medical cannabis access laws and product safety regulations without interference by the federal government, and remove current obstacles to research.

“Moving cannabis out of Schedule I would remove significant barriers to conducting additional research that would not only benefit the millions of Americans with access to medical cannabis under existing state programs, but also those living in states that are moving toward implementing programs,” added Steph Sherer, ASA’s Executive Director.

Medical cannabis patients are not the only voices calling on the DEA to reschedule cannabis. Many Congressional members and health organizations, including the American College of Physicians and the American Academy of Pediatrics, are calling for the DEA to act. In a letter dated June 23, 2016, addressed to the U.S. Attorney General and the DEA, Elizabeth Warren (D-MA) and seven other U.S. Senators requested an update on the DEA’s timeline for issuing a scheduling determination, noting that the rescheduling of cannabis and the resolution of other regulatory barriers to research is a time-sensitive matter that requires immediate action. The group commented that despite it being a Schedule I substance, 42 states have adopted medical cannabis programs, and the disconnect between state and federal law creates a host of problems for legitimate cannabis businesses and the ability to conduct clinical research.