No Prison for Cannabis Edible Maker

A federal judge has refused to impose prison time on a California man who had produced and distributed edible medical cannabis products throughout the state. 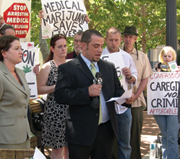 Despite sentencing guidelines calling for at least two and a half years in jail, U.S. District Court Judge Claudia Wilkin exercised her discretion to sentence Michael Martin, 34, to five years probation, with one year to be served in a halfway house and one year to be served in home confinement. The dramatic sentence caused the courtroom full of patients and activists to erupt in applause.

Faced with the threat of more serious charges and the specter of a federal trial in which no information about state law or medical use could be introduced, Martin pled guilty in federal court to manufacturing marijuana edibles and did not contest the government finding of more than 400 plants seized in the September 2007 DEA raid.

In a speech to the court that had observers in tears, Martin spoke eloquently about why he had acted on behalf of patients, describing the cancer patients he was proud to have helped, the support of his loving family, and how he had only acted on behalf of others, never for profit.

That speech, the enormous volume of letters of support for Martin the judge received, and the lack of any evidence that any edible produced by Mickey was diverted to recreational use, all helped the judge declare that this was a unique case that did not call for a normal sentence, and certainly not the more than three years of federal prison that the law mandates.

Comments from the bench about the tensions between state and federal laws also made clear that the judge understood medical cannabis cases to be different from other federal drug cases, and she joined several other members of the federal judiciary in departing from the government's sentencing guidelines.

"The prosecution of good people like Michael Martin, who are trying to give patients the choice of an edible, non-smoked medicine, is a travesty," said Rebecca Saltzman, ASA Chief of Staff. "The government says smoking is a bad delivery method then prosecutes those who provide an alternative -- ridiculous."

ASA played a key role in providing support for Martin and his family after he surrendered to authorities. ASA staff helped organize the grassroots response of local patients and activists who filled the courtroom during Martin's hearings and assisted him with managing the media response in the wake of DEA attempts to portray him as a dangerous drug dealer.

Martin was the state's largest producer of medical cannabis baked goods and other edibles, products that offer an alternative to smoking cannabis that is preferred by many patients. The products were available only through licensed dispensaries and carried prominent labels warning that they were cannabis products for medical use only. A majority of the more than 300 medical cannabis dispensaries in California provide edible products to their patients.

AB 2279 would have stopped workplace discrimination against hundreds of thousands of legal patients, whose right to work was compromised by a California Supreme Court decision earlier this year. The governor's veto means that California employers can still fire patients who follow state law - even those who only use medical cannabis in the privacy of their homes. The veto is a setback for fairness and non-discrimination, but ASA will fight on in the state courts and capitol to protect and expand cannabis patients' rights.

"The governor's veto is disappointing," said Don Duncan, ASA's California Director. "But we have seen that persistent and strategic work by ASA - supported by our robust grassroots effort - can get results. In a different political climate, we would have gotten the governor's signature. But our strategy got it through the legislature, so we're hopeful for the future."

Medical cannabis patients were caught with other constituencies in the crossfire between Gov. Schwarzenegger and state lawmakers over the state's budget. The governor vetoed a record number of bills this year, including some that passed both houses unanimously and had no registered opposition, in apparent retaliation for the legislature's reluctance to adopt his controversial budget.

Patient Gets Cannabis Back from Police, Finally

In another victory for ASA's return of property campaign, a California medical cannabis patient got his cannabis back from police after a nearly three-year wait.

Jim Spray, 52, finally got Huntington Beach police to return the property they had seized from him in November 2005, but not without going through the legal wringer. 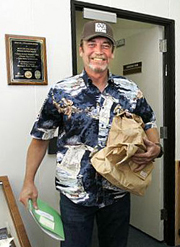 Jim Spray sports an ASA cap as he retrieves his property from police.

With the help of ASA Chief Counsel Joe Elford, Spray went to court three years ago, asking for the return of approximately five ounces of marijuana, twelve immature plants, a jar of concentrated cannabis, and marijuana cultivation equipment valued at $1,000. But the court denied the motion.

The ruling hinged on another case, Chavez v. Superior Court, which had said that a patient-caregiver was not entitled to the return of his medical marijuana because not all was for his personal medical use. Courts and prosecutors used this to claim that there was no circumstance under which medical marijuana could be returned.
"We had been fighting this misunderstanding in a number of cases," said Joe Elford, ASA's Chief Counsel. "But because you can only appeal the denial of a motion for return of property through a procedure known as a writ, the appellate courts could elect to ignore us, which is what they did."

But Spray was not alone. Felix Kha was fighting a similar battle with Garden Grove police, also with ASA's help. Police had already been ordered to return patient Kha's property, but the city refused, and the appeal languished for months - until Spray's case came along.

"With Jim Spray's case filed," said Elford, "I could remind the court of appeal that the Garden Grove case was pending and that this was an issue that needed to be resolved. James Spray's case pushed the issue along."

The appeals court consolidated the cases for oral argument, with Elford arguing both. Three months later, decisions came down in favor of both patients. But the difficulties continued for Spray.

Despite being directed by the court of appeal to issue an order for the return of Spray's property, the trial court refused. So Spray and Elford had to file yet more paperwork, finally resulting in an order to police, nine months after ASA's court win.

On September 17, Spray took the order to the Huntington Beach Police Department to get his property back. Although much of the cultivation equipment had been mysteriously destroyed and the dried marijuana and plants were beyond salvage, one jar contained several grams of concentrated cannabis that is still usable, much to Spray's delight.

Several U.S. Representatives used the waning days of 110th Congress to record their continued opposition to federal enforcement raids on individuals who use or provide medical cannabis in accordance with their state law.

ASA's lobbying efforts helped convince more than a dozen members of the U.S. House of Representatives to sign a bi-partisan letter asking the Judiciary Committee to investigate DEA enforcement activity against medical cannabis dispensing collectives and their landlords. The lawmakers have asked to Judiciary Committee Chairman John Conyers to convene an oversight hearing on whether the DEA is using federal resources wisely and efficiently, what impact the increased level of enforcement is having on the ability of state and local governments to effectively implement their state law, and what changes to federal law are necessary.

"We had hoped that oversight would have occurred by now," said Caren Woodson, ASA's Director of Government Affairs, "But given the Bush Administration's systematic obstruction of Congressional oversight the past few years, particularly of officials in the Justice Department, we expect oversight hearings to have generous support next year with a new Congress and new Administration open to change."

As a result of ASA efforts on Capitol Hill and in California this year, Chairman Conyers earlier sent a letter to DEA Acting Administrator Michelle Leonhart which questioned the Department of Justice about the enforcement tactics being used against medical cannabis patients and state programs.

Two candidates, one president. Both Obama and McCain have public positions on medical cannabis, and one is better than the other, but neither is perfect. But you can help. Call both campaigns right now and set them straight about medical cannabis.

Sen. Barack Obama has stated publicly that he will end DEA raids on medical cannabis patients. Call his campaign at: (866) 675-2008 and say:

On the other hand, Sen. John McCain will not end DEA raids, and does not even believe that cannabis can be an effective treatment. Call his campaign at: (703) 418-2008, and say:

"Hi, my name is __________ and I understand Sen. McCain is opposed to ending DEA raids on seriously ill patients in states that have medical cannabis laws. But medical research, public opinion, and states' rights all say Sen. McCain is wrong, and I strongly urge him to change his position in favor of protecting patients who use medical cannabis legally in their own state."