Is Medical Marijuana the Solution for ALS? 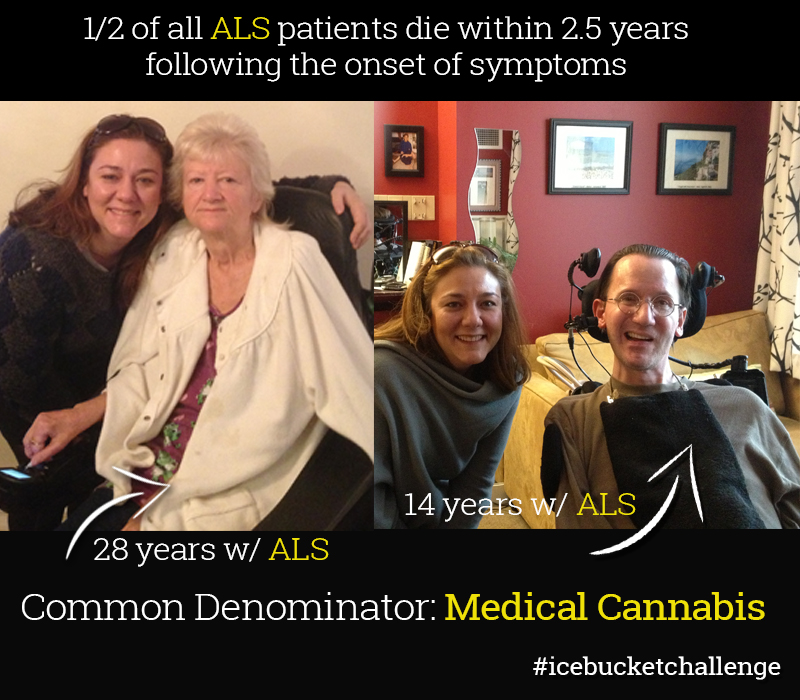 The ice bucket challenge has raised a huge amount of awareness for Amyotrophic Lateral Sclerosis (ALS) -- popularly known as Lou Gehrig's Disease.  With the help of celebrities, politicians and thousands of participants from across the country, the ALS Association raised $94.3 million dollars for research.  However, as awareness burgeons, many remain unaware of the significant benefits that medical marijuana has in treating ALS.

Lou Gehrig’s disease (or ALS, Amyotrophic lateral sclerosis) is a fatal disease that affects degrades the neurons in the body that control movement. The hallmarks of ALS is a rapid progression of weakness and paralysis, death occurs within 3-5 years in most cases, and brain function remains intact (Rowland 2001) . The exact causes or pathogenesis of ALS is poorly understood, and while the pharmaceutical industry has made treatment options available, none of these treatments prevent disease progression and death.

The human clinical studies on THC-only Cannabis are limited by sample size. Research regulations for clinical use of THC also make it difficult to recruit ALS patients in a timely manner for a controlled study. Despite these significant obstacles, two human studies have been conducted. One of the studies, was a pilot study investigating the safety and tolerability of THC in ALS patients (Gelinas/ABood 2002). This clinical study confirmed symptomatic benefits for appetite, insomnia, and spasticity. The seconds research study was conducted as an anonymous survey in 80 countries, 131 surveys were completed, and the mean age 54. Participants reported that Cannabis helped provide relief from drooling, speech and swallowing difficulty, appetite loss, weakness, shortness of breath, spasticity, depression, and pain (Amtmann D 2004). In animals with ALS, THC administered either before or after the onset of the disease delayed motor impairment and prolonged survival. Furthermore, THC potently reduced oxidative and excite-toxic damage in spinal cord cultures in vitro (Raman et al. 2004). The protective effects of cannabinoids and their anti-spastic effects in MS are well known (Carter 2001). Furthermore, cannabinoid receptors are up-regulated in human tissue during disease progression, making them an abundant target for treatment.

The benefits of Cannabis to treat ALS is prevalent in anecdotal evidence, but basic laboratory and animal research suggests that THC may be the first (and only?) naturally occurring, non-toxic, anti-oxidant to slow the progressions of the disease significantly. In addition to delaying the progression of disease and increasing life-span cannabinoids treatments may offer other benefits include sleep induction, appetite stimulation, saliva reduction, bronchodilation, analgesia, and muscle relaxation (Carter).