“For years the landscape of marijuana use has been rapidly shifting as more and more states are legalizing cannabis for the treatment of medical conditions and recreational use,” said Marie McCormick, chair of the committee; the Sumner and Esther Feldberg Professor of Maternal and Child Health, department of social and behavioral sciences, Harvard T.H. Chan School of Public Health; and professor of pediatrics, Harvard Medical School, Cambridge, Mass. “This growing acceptance, accessibility, and use of cannabis and its derivatives have raised important public health concerns. Moreover, the lack of any aggregated knowledge of cannabis-related health effects has led to uncertainty about what, if any, are the harms or benefits from its use.  We conducted an in-depth and broad review of the most recent research to establish firmly what the science says and to highlight areas that still need further examination. As laws and policies continue to change, research must also.”

We should all thank the National Academies of Sciences, Medicine, and Engineering for addressing the final factors preventing the rescheduling of cannabis. The Drug Enforcement Administration (DEA) demonstrated in their recent denial of rescheduling, that cannabis fulfills 6 of the 8 FDA factors for rescheduling. However, the DEA has long contended that there is no recognized medical use and its use is not accepted by health professionals, thus cannabis cannot be rescheduled. The DEA is currently being sued to update their website’s cannabis health information with up-to-date scientific data. Thanks to the Academies’ recent report, we now know there is recognized medical utility for cannabis and that it is accepted, even by leading drug abuse experts such as Dr. Ziva Cooper and the other panelists who presented the publications findings in a webinar. For those of you who missed the webinar, you can find comments on social media through #cannabishealtheffects.

An overview of the findings by category can be found below.

Figure 1: Types of evidence used in the publication 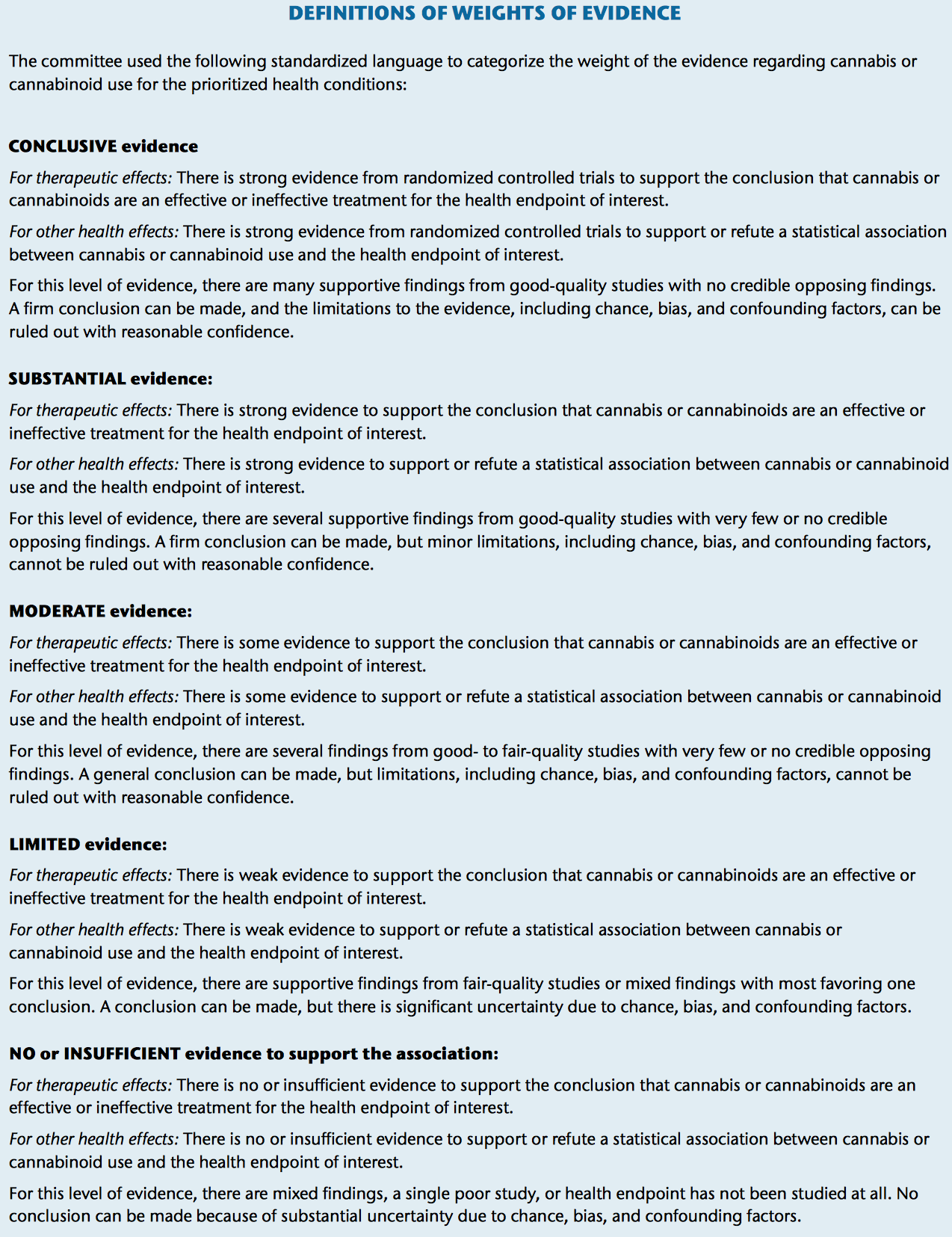 One of the most common therapeutic uses of cannabis and cannabinoids is to treat chronic pain in adults. The committee found conclusive evidence to support that patients who were treated with cannabis or cannabinoids were more likely to experience a significant reduction in pain symptoms. There are over 9,000 patient/years of data on the use of cannabis-based medicine to treat pain. For adults with multiple sclerosis-related muscle spasms, there was substantial evidence that short-term use of certain “oral cannabinoids” (man-made THC, cannabis-based medications that are orally ingested) and nabiximols (cannabis extracts via sublingual absorption) improved their reported symptoms. Furthermore, in adults with chemotherapy-induced nausea and vomiting, there was conclusive evidence that certain oral cannabinoids and inhaled cannabis were effective in preventing and treating those ailments.

The report becomes slightly difficult to navigate with some of the other statements about the therapeutic effects of cannabis, that are over-cautiously described, such as:

There is limited evidence that cannabis or cannabinoids are ineffective for:

The evidence reviewed by the committee suggests that cannabis use is associated with, but does not cause, schizophrenia, other psychoses and social anxiety disorders, and to a lesser extent depression. The authors were clear that cannabis use does not cause mental health disease de novo, but rather unmasks the disease (see Figure 2). Alternatively, in individuals with schizophrenia and other psychoses, a history of cannabis use may be linked to better performance on learning and memory tasks. Cannabis use does not appear to be associated with developing anxiety, depression, or PTSD.

Heavy cannabis users are more likely to report thoughts of suicide than non-users, and in individuals with bipolar disorder, near-daily cannabis users show increased symptoms of the disorder, when compared to non-users. However, this research is limited and confounded by polydrug use, such as with populations that use stimulants and tobacco with cannabis. 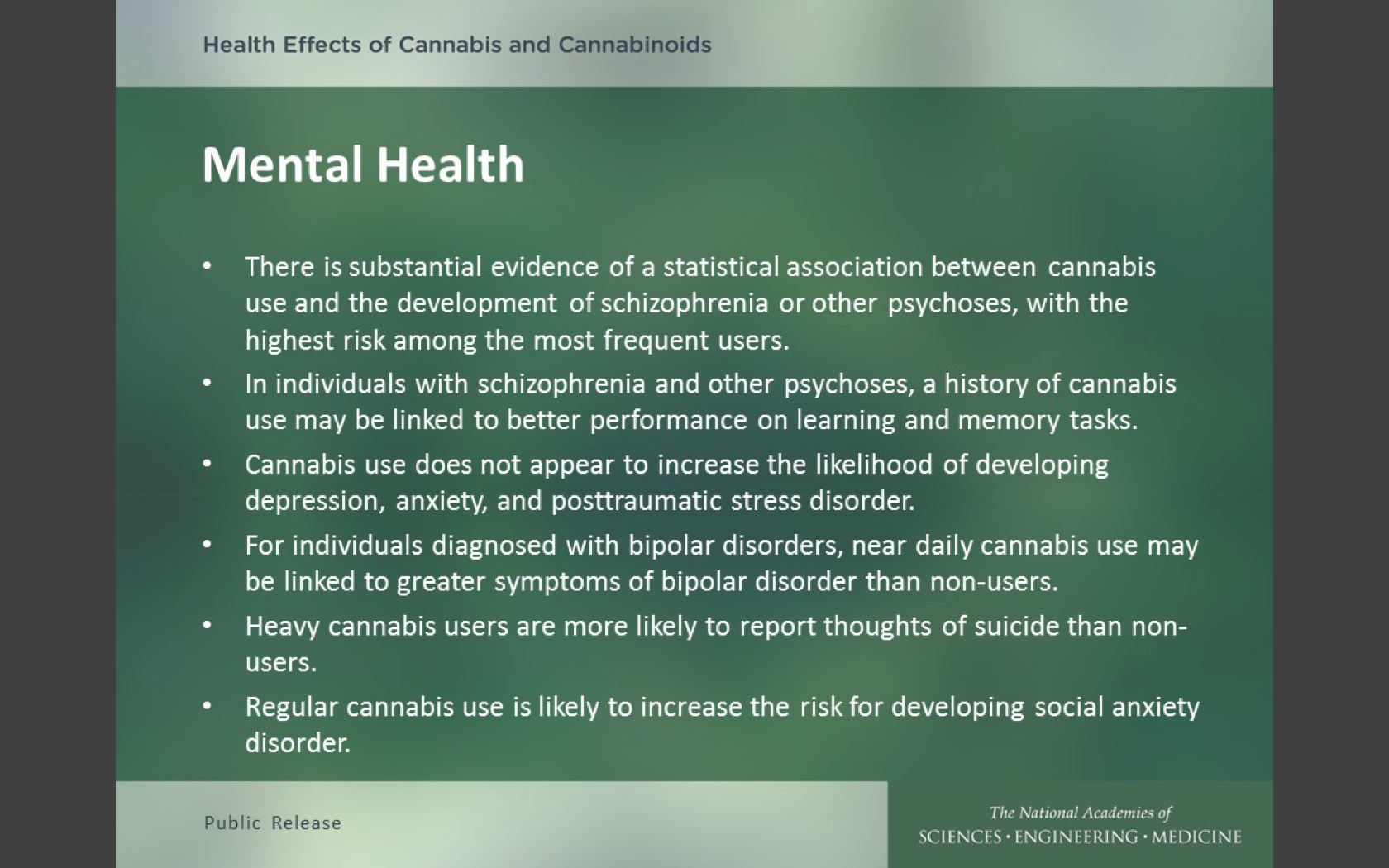 Often we hear someone say that no one has died from cannabis and that the compounds on the plant are non-toxic. Afterall, THC and the terpenes found on cannabis are FDA approved substances. However, the report suggests that there is not enough data, therefore,they cannot “support or refute” the claim that no deaths are directly attributable to cannabis use. We agree that it is exceedingly difficult to prove a negative finding, a logical impossibility perhaps. Just as the report suggests, this may or may not be true:

“There is no or insufficient evidence to support or refute a statistical association between cannabis use and all-cause mortality (self-reported cannabis use).”

Limited evidence suggests that non-medical use of cannabis prior to driving increases the risk of being involved in a motor vehicle accident. Furthermore, there is limited evidence that in states where cannabis use is legal, there is an increased risk of unintentional cannabis overdose (such as sedation and intoxication), non-serious adverse events or minor injuries among children. In one study, ingestion was the most common route of unintentional pediatric exposure, accounting for 78% of all incidents. Another study reported that from 2000 to 2013, the annual rate of poison center calls related to cannabis exposures among children younger than 6 years of age was 2.82 times higher in states that had legalized medical cannabis prior to 2000 than in states where medical cannabis remained illegal as of 2013. Today, most Americans live in states, which legally allow children (with parental supervision) to access cannabis products for medical use, such as for epilepsy.

The committee called for more research to determine whether cannabis use is associated with death or with occupational injury.

The committee said that more research is needed to determine whether and how cannabis use is associated with heart attack, stroke, and diabetes. However, some evidence suggests that cannabis smoking may trigger a heart attack. Their take home message is that there is insufficient evidence to support cannabis in causing heart attacks, stroke and diabetes.

The evidence reviewed by the committee suggests that smoking non-medical cannabis, such as street marijuana, on a regular basis is associated with more frequent chronic bronchitis episodes and worse respiratory symptoms, such as chronic cough and phlegm production, but quitting smoking is likely to reduce these conditions. The committee stated that it is unclear whether cannabis use is associated with certain respiratory diseases, including chronic obstructive pulmonary disease, asthma, or worsened lung function because these studies are often confounded by tobacco use.

There is a lack of data on the effects of cannabis or cannabinoid-based therapeutics on the human immune system, as well as insufficient data to draw overarching conclusions concerning the effects of cannabis smoke or cannabinoids on immune competence, the committee stated. There is also insufficient evidence to support or refute a statistical association between cannabis or cannabinoid use and adverse effects on immune status in individuals with HIV. Nevertheless, the authors suggest that there is limited evidence that regular exposure to cannabis smoke may suppress the immune system.

Cannabis Use and the Abuse of Other Substances

The committee found limited evidence that cannabis use increases the rate of initiating other drug use, primarily the use of tobacco. This is similar to the DEA’s denial of rescheduling report, which stated that there is not enough evidence to support the gateway theory of drug abuse.

The committee found that learning, memory, and attention are impaired after immediate cannabis use. Very limited evidence suggests that there are impairments in cognitive domains of learning, memory, and attention in individuals who have stopped smoking cannabis, as measurable effects disappear with abstinence. In addition, there is limited evidence to suggest that cannabis use is related to impairments in subsequent academic achievement and education as well as social relationships and social roles. Adolescence and young adulthood are when most youth begin to experiment with substances of abuse, including cannabis, and it is during these periods that the neural layers that underlie the development of cognition are most active, however tobacco use seems to be the biggest factor. The committee also found limited evidence of an association between cannabis use and increased rates of unemployment and low income, especially when controlled for tobacco and other drug use.

Smoking cannabis during pregnancy is linked to lower birth weight in the offspring, some evidence suggests. However, the relationship with other pregnancy and childhood outcomes is unclear. Records of over 10,000 births show no gross abnormalities, no significant differences in IQ or development.

In addition to recommending more research on the beneficial and harmful effects of cannabis and cannabinoid use, the committee emphasized several challenges and barriers in conducting such research. For instance, specific regulatory barriers, including the classification of cannabis as a Schedule I substance, impede the advancement of research. Researchers also often find it difficult to gain access to the quantity, quality, and type of cannabis product necessary to address specific research questions. The committee said a diverse network of funders is needed to support cannabis and cannabinoid research. 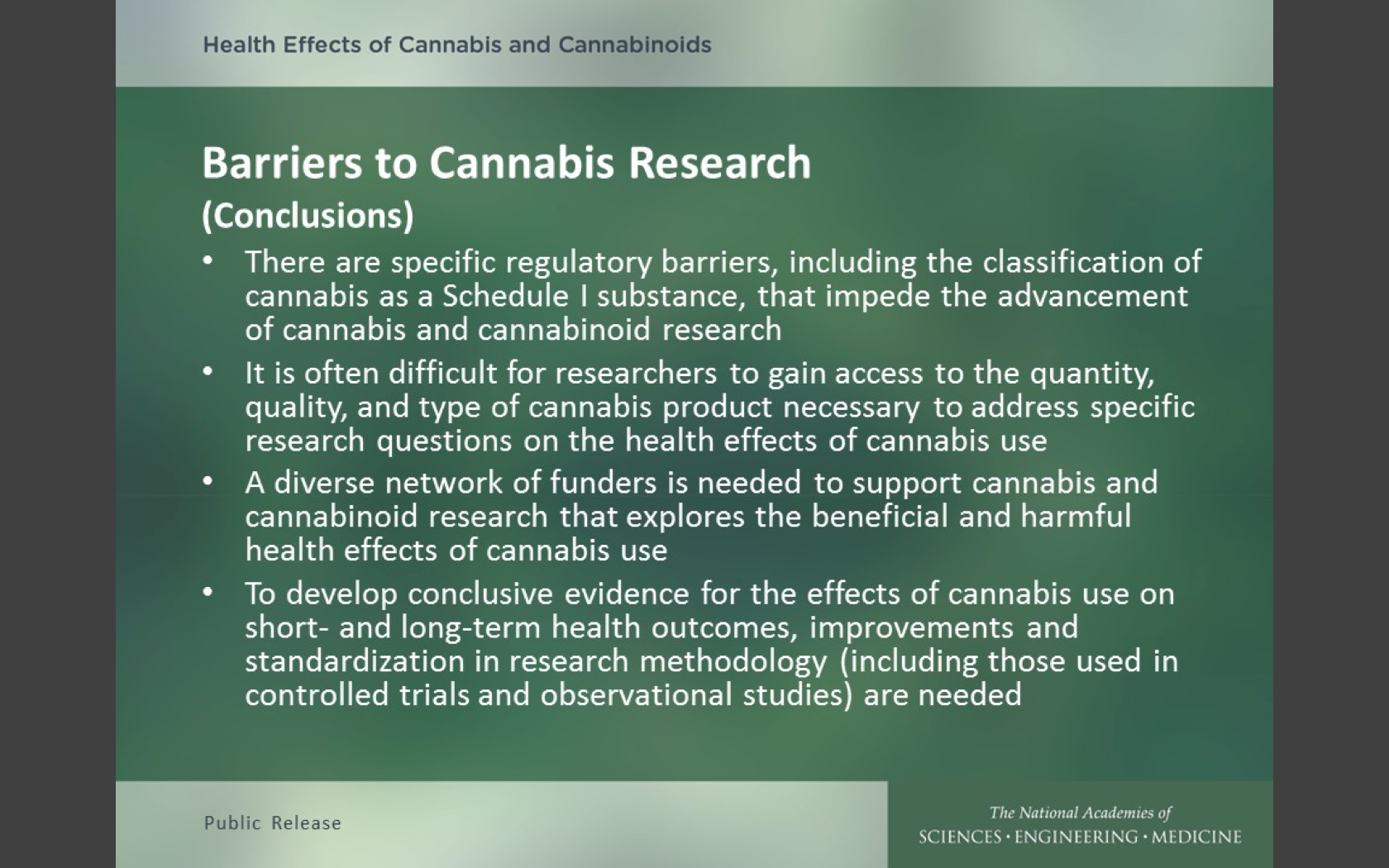