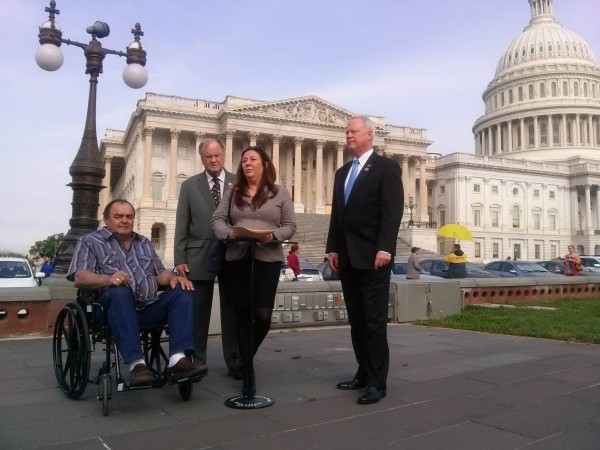 Late last week, Representatives Dana Rohrabacher (R-CA) and Sam Farr (D-CA) sent a letter to the Inspector General’s Office of the U.S. Department of Justice (DOJ) demanding an investigation into violations of the Anti-Deficiency Act regarding the continued raids and prosecutions against state legal medical marijuana patients and providers. The letter is one of a series of letters that have been sent by Members of Congress to various Administrative agencies regarding the federal government’s crackdown on state legal conduct and policies that inhibit medical marijuana research.

The letter sent by Reps. Rohrabacher and Farr is based on their amendment that was successfully passed in the House in May 2014 and was included in the final budget CRomnibus in December 2014 thanks to the leadership of Senator Mikulski. The amendment forbids DOJ from using funds to interfere with implementation of state legal medical marijuana programs. At issue between DOJ and Reps. Rohrabacher and Farr (and seemingly everyone else in the country) is whether “implementation” means putting these laws and regulations on the books, or actually administering the programs.

The plain language of the Rohrabacher-Farr Amendment states that “None of the funds made available in this Act to the Department of Justice may be used, with respect to the States of...[list of jurisdictions]..., to prevent such States from implementing their own State laws that authorize the use, distribution, possession, or cultivation of medical marijuana.” The key word in the provision is “implementation,” which is not explicitly defined in the U.S. Code, federal case law, or Black’s Law Dictionary. Some may argue that implement only pertains to putting the law into effect, and does not apply to conduct under the law. However, Webster’s defines the transitive verb “implement” as to “carry out, accomplish; especially: to give practical effect to and ensure of actual fulfillment by concrete measures.” Therefore, if actual fulfillment of the state medical marijuana laws is not achieved to due federal law investigations, raids, arrests, prosecution, incarceration, by definition state implementation of these laws is being interred with, because fulfillment must be ensured. It is not possible to accomplish the purpose of the state medical marijuana laws if the parties utilizing the state program (patients, caregivers, physicians, cultivators, providers, landlords, etc.) are being thwarted from engaging in this conduct due to federal interference. Any federal interference from the Department that undermines this fulfillment is prohibited by the Rohrabacher-Farr Amendment.

This meaning was well established in the floor debate, as many of the amendment cosponsors spoke out precisely described the intent of the amendment that DOJ, which is to prevent the arrest and prosecution of those abiding by their state’s medical marijuana laws. As Rep. Farr put it:

“This is essentially saying, look, if you are following State law, you are a legal resident doing your business under State law, the Feds just can't come in and bust you and bust the doctors and bust the patient. It is more than half the States. So you don't have to have any opinion about the value of marijuana. This doesn't change any laws. This doesn't affect one law, just lists the States that have already legalized it only for medical purposes, only medical purposes, and says, Federal Government, in those States, in those places, you can't bust people. It seems to me a practical, reasonable amendment in this time and age.”

In fact, if one goes back and reviews what Reps. Andy Harris and John Fleming said in opposition of the amendment, they claimed it would go even further. As Rep. Harris said:

Of course, the fears of Harris and Fleming turned out to be way off the mark, as the prosecutions of the Kettle Falls Five, asset forfeiture cases, the current prosecution of state-legal dispensary operator Charles Lynch have shown.

DOJ is clearly ignoring the legislative intent and taking a false interpretation of the textual language of the amendment. The letter from Farr and Rohrabacher characterizes DOJ’s position as being at best, “a stretch.” Patient advocates will want to keep an eye on the response of the inspector General’s Office. In the meantime, patients advocates should continue to rally support behind the CARERS Act, which would once and for all end the war on state-legal medical marijuana conduct.