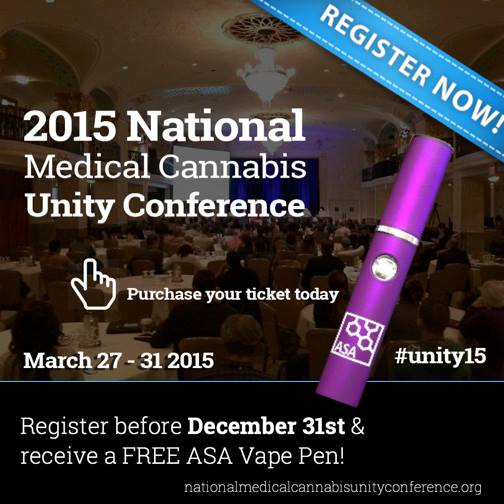 Happy Holidays to ASA members and friends in California!

2014 may be winding down, but medical cannabis activity at the state level is speeding up! See the News section of this message for articles about an exciting development in court for patients who use concentrates and a new player in the statewide regulatory game - the State Water Resources Control Board. That agency will join lawmakers in trying to regulate medical cannabis cultivation next year. Meanwhile, cities and counties are still grappling with local regulation, a Los Angeles neighborhood rejected a medical cannabis Santa Claus, and the results from the states biggest outdoor cannabis contest are in.

Don't forget to register for the ASA National Medical Cannabis Unity Conference and Citizen Lobby Day before December 31st to get the special early-bird discount and a free ASA Signature Vape Pen. The conference will be at the beautiful Lowes Madison Hotel in Washington, DC, March 27-31, 2015. You can also save a lot of money by booking your travel in advance.  Check out the event page for information about scholarships and tips for raising money for your trip to DC.

Wednesday marked a milestone in the 18-year battle between state and federal law concerning medical marijuana. But to me, and thousands of other Americans, it marks a day that our country has finally acknowledged that our battle exists.
Read more here:
http://www.huffingtonpost.com/steph-sherer/the-federal-government-re_b_6341244.html

A state appellate court in Sacramento has ruled that “concentrated cannabis” qualifies as marijuana for purposes of medical use.
Read more here:
http://www.sacbee.com/news/local/health-and-medicine/article4708713.html#storylink=cpy

As soon as this summer, North Coast pot growers may be required to submit a water use site plan to the Department of Water Resources.
Read more here:
http://www.willitsnews.com/ci_27154530/water-board-moves-forward-marijuana-regulations

If the legal marijuana industry learns anything from Big Tobacco’s experience in this country, it’s that mixing kids and smoking is just not going to fly, as the industry found out with the banishment of Joe Camel and his ilk.
Read more here:
http://consumerist.com/2014/12/17/l-a-medical-marijuana-dispensary-removes-pot-smoking-santa-painting-from-the-window-after-complaints/

Despite 2013's Measure D, under which only about 135 existing medical marijuana dispensaries have permission to stay open in Los Angeles, the city has continued to issue tax registration certificates to new pot shops and keeps collecting business taxes from some 450 dispensaries.
Read more here:
http://www.latimes.com/opinion/editorials/la-ed-marijuana-taxes-20141216-story.html

A Del Rey woman will not be fined $43,000 for allegedly violating Fresno County’s ban on medical marijuana, it was confirmed Wednesday.
Read more here:
http://www.fresnobee.com/2014/12/17/4291057_marijuana-fine-is-withdrawn-in.html?rh=1#storylink=cpy

A flurry of new consumer reports are taking the Bay Area medical cannabis industry to task for what’s in their products.
Read more here:
http://www.eastbayexpress.com/LegalizationNation/archives/2014/12/18/several-bay-area-medical-cannabis-products-flunk-a-potency-test

It’s the intersection of tech and pot. As more and more states legalize marijuana – both recreational and medicinal – the opportunity to cash in is blowing up. And ground zero is right here in the Bay Area.
Read more and watch a video here:
http://www.nbcbayarea.com/news/local/Pot-Delivery-Services-Take-Over-the-Bay-Area-285903811.html

Monday, December 22, 2014 - Marijuana Compassion and Common Sense (Online)
6:00 PM at www.blogtalkradio.com/marijuananews Tune in for this weekly live Internet broadcast about cannabis and medical cannabis issues. You can call in to participate.

ASA Members and allies did not report any court support dates this week.

There are no ASA Chapter meetings scheduled this week.