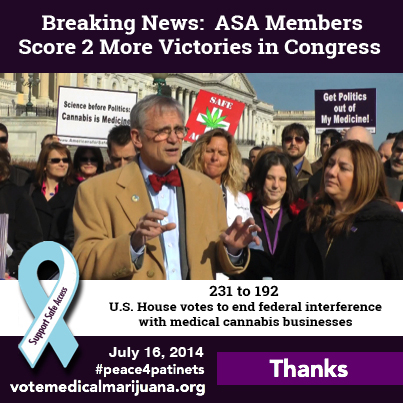 ASA is working hard to end federal interference and intimidation in medical cannabis states and to finally change federal law. These two victories come on the heels of an historic vote in May to cut off federal funding for medical cannabis enforcement. Taken together, these votes signal a sea change in Washington, DC.

Can you help us push our advantage in Congress right now? Make a generous one-time contribution to ASA or an affordable monthly donation to support our work today!

We asked our members to support an amendment by Congressmen Denny Heck (D-WA), Ed Perlmutter (D-CO), Barbara Lee (D-CA), and Dana Rohrabacher (R-CA) to prevent the Department of Treasury from using funds against cannabis and medical cannabis businesses in sates that allow them. The amendment was approved 231 to 192. If the amendment is also approved in the Senate, the IRS will no longer be able to use audits to intimidate and close legal, tax-paying organizations.

We also rallied opposition to an amendment by Congressmen John Fleming (R-LA) and Andy Harris (R-MD) that would have prevented the Department of Justice (DOJ) and the Department of Treasury from spending any money in compliance with a 2014 memo from the DOJ that cleared the way for banks to work with the legal cannabis and medical cannabis organizations. Our members helped kill that proposal. The lack of banking services has been a big impediment and added risk for the emerging industries.

Both amendments must now go to the Senate, where they join a previously approved measure to block the DOJ from spending money to block state medical cannabis programs. We have a big fight ahead to get all three amendments included in the final 2015 spending bill. That is why ASA needs your support right now. Please make a contribution of $25, $50, $100, or more at this strategic moment.

Medical cannabis patients rely on the emerging industry for safe, legal, and dignified access to medicine. These two victories take us closer to a time when the federal government stops interfering in the medical cannabis industry and blocking patients’ access.

ASA members and allies helped make this happen. Thank you for your continued participation and support to keep going!