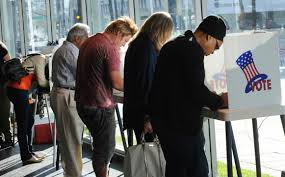 Be sure to join me online for the next live Google Hangout on Thursday, October 16, at 7:00 PM to talk about local ballot measures and what’s at stake for medical cannabis in the November 4 elections. Voters will decide on twelve measures related to medical cannabis in ten different cities and counties this year. There are important legislative races that will help to define next year’s political landscape and an interesting development in the race for Attorney General (see the News section for more details on that).

A live Google Hangout is an interactive event you can join from your computer or mobile device. Click on this link a few minutes early to get signed in for questions and comments:

You can also watch the broadcast live on YouTube here, although you cannot ask questions from this link:

Your participation in local and state politics matters, so get informed and get out and vote! You can learn more bout where state and federal candidates stand using ASA’s Vote Medical Marijuana website. Read more about this powerful tool in the Website Spotlight section below.

Remember that the deadline to register to vote at your current address is Monday, October 20.

The medical marijuana advocacy group Americans for Safe Access (ASA) has produced a new 30-second online advertisement to launch its survey drive for for this year's election-cycle educational campaign. The ad will also air on this Sunday's morning cable news programs in Detroit, Philadelphia, Sacramento, South Florida, and Washington State. As part of its groundbreaking "Vote Medical Marijuana" campaign, ASA has sent out more than 2,000 candidate surveys to help patients and the general public make more informed electoral decisions based on candidates' positions on medical marijuana.
Read more here:
http://www.safeaccessnow.org/medical_marijuana_advocates_survey_federal_state_electoral_candidates_ahead_of_november_elections

Attorney General Kamala Harris has laughed her way out of the good graces of California's marijuana industry. In turn, some of the state's weed players are now backing the AG's Republican challenger.
Read more here:
http://www.sfweekly.com/thesnitch/2014/10/08/marijuana-advocates-ditch-kamala-harris-for-weed-friendly-republican

---
Pro-Weed Voters Should Not Ignore the Election (California)
David Down, East Bay Express

The deadline to register to vote in the November 4 election is October 20, and cannabis activists are warning that progressives and young voters should not ignore the so-called "off-year" election. Voters in 2014 will, in effect, be deciding if they will continue to be denied access to medical marijuana and whether they will be getting recreational weed stores in 2016, said Ellen Komp, deputy director of California NORML.
Read more here:
http://www.eastbayexpress.com/oakland/pro-weed-voters-should-not-ignore-the-election/Content?oid=4092102

Fresno County has successfully defended its ordinance banning medical marijuana cultivation for the second time, recently earning a dismissal of a suit that sought legal cultivation of medical marijuana. The lawsuit was filed by the American Civil Liberties Union earlier this year.
Read more here:
http://www.fresnobee.com/2014/10/03/4159662_fresno-countys-medical-marijuana.html?rh=1#storylink=cpy

San Jose's medical cannabis clubs are facing a conundrum: shut down by Oct. 17 or face fines. But those $25 fines could be increased to as much as $50,000, under a plan being considered by the city council. Councilmembers on Tuesday decided to put off a decision on the new ordinance by asking staff for a report in 30 days.
Read more and watch a video here:
http://www.nbcbayarea.com/news/local/San-Jose-Could-Raise-Marijuana-Fines-5000-277641011.html

On a recent Saturday, the ACLU of Northern California Shasta-Tehama-Trinity Chapter held its meeting at a local pizza restaurant in Redding. The room was packed with medical marijuana patients deeply frustrated by unfair efforts of local enforcement to deny them access to their medicine.
Read more here:
https://www.aclunc.org/blog/dont-deny-sick-patients-access-their-medicine

Three armed men were arrested near Angel Camp the evening of Saturday, Sept. 27, on suspicion of robbing a medical marijuana garden. Donald Keith Bailey, 30, of Burbank; Robert Merrell Cottrell, 57, of Copperopolis; and Daniel Jeffrey Parsons, 35, of San Lorenzo, were arrested about 9 p.m. at the garden site on MJB Ranch Road off of Pool Station Road.
Read more here:
http://www.calaverasenterprise.com/news/article_002c4f06-4db4-11e4-afc4-e7cbddd2535f.html

The recent push for better access to medical marijuana in Monterey County hits the First City on Tuesday — three years after dispensaries were banned. The Monterey City Council will hear a presentation around 4 p.m. from Pebble Beach businesswoman Valentia Piccinini to open a medicinal marijuana dispensary.
Read more here:
http://www.montereyherald.com/localnews/ci_26675921/monterey-hear-marijuana-dispensary-proposal

The city is turning the lights off at medical-marijuana dispensaries that illegally opened across the city in a move to get them to leave. The strategy has worked.
Read more here:
http://www.ocregister.com/articles/anaheim-637604-city-marijuana.html

6:00 PM at www.blogtalkradio.com/marijuananews Tune in for this weekly live Internet broadcast about cannabis and medical cannabis issues. You can call in to participate.

6:00 PM at Mc Bean Memorial Park, 65 Mc Bean Park Dr., Lincoln, CA 95648. The City Council may vote on an ordinance to ban all medical cannabis cultivation. Contact the City Council in advance at http://ci.lincoln.ca.us/default.aspx?Jpage=11030 The date of this vote is subject to change.

7:00 PM online at https://plus.google.com/events/ci81048q7fsdtcqea8acs83boi8 or on YouTube at http://www.youtube.com/watch?v=uz50lVuqa6Q. This live broadcast with ASA CA Director Don Duncan will focus on local ballot measures and the November election. There will be time for questions and comments.

12:00 PM at City Hall, Room 400, 1 Dr Carlton B Goodlett Pl, San Francisco, CA 94102. The hearing concerns an application for a permit for SPARC, one of the city's finest patients’ collectives. You can speak in support of item #12. Watch the event live on Channel 78 at http://www.sfgovtv.org. Email [email protected] for details.

You must be registered to vote at your current address before Monday, October 20, in order to vote in the November 4 general election. You can register in person or online.