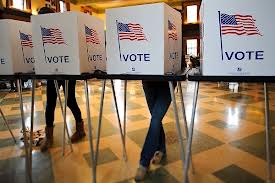 Tomorrow is Election Day, and there is a lot on the line in California. We will elect 53 members to the US House of Representatives, 80 State Assembly Members, 20 State Senators, 8 Statewide Officers, and numerous city and county officials. Voters in 10 different cities and counties will also decide on 12 different medical cannabis ballot measures that will affect if and how legal patients get their medicine.  Locate your polling place and help make a difference by casting a ballot tomorrow between 7:00 AM and 8:00 PM.

Officials expect a low voter turn out, which means your vote is even more important. Visit ASA’s new Vote Medical Marijuana 2014 website to learn more about where state and federal candidates stand on medical cannabis and to make an informed choice.

Your vote is especially significant if you live in one of the 10 cities or counties with local ballot measures about medical cannabis – Butte County, Encinitas, La Mesa, Lake County, Nevada County, Santa Ana, City of Santa Cruz, Santa Cruz County, and Shasta County. Voters in these cities and counties will decide on sensible regulations for cultivation and distribution of medical cannabis, overturning bans on safe access, “sin taxes” aimed at legal medicine, and more.

This election will set the tone for California politics for the next two years. Use this strategic midterm election to help steer California on a better path for local, state, and national politics in 2015 and 2016.

Judge Kimberly Mueller announced an end to five days of federal evidentiary hearings on the constitutionality of cannabis’ Schedule I status, requesting extensive briefings from the parties which realistically could delay her ruling by two months or more.
Read more here:
http://theleafonline.com/c/politics/2014/10/schedule-hearing-concludes-judges-ruling-expected-december/

Medical marijuana dispensaries are outlawed in the Southern California city of Santa Ana, but that hasn't stopped pot shops from flourishing. Officials estimate there are at least 60 doing business, even though the city has repeatedly gone to court, issued fines, cut off water and power to storefronts, and called in federal drug agents and local police to enforce the ban.
Read more here:
http://www.therepublic.com/view/story/64566b933edb4f109f1481ef695a0abd/CA--California-Election-Medical-Marijuana

The Humboldt County Board of Supervisors voted unanimously Tuesday to approve an ordinance aimed at reducing neighborhood nuisances caused by the excessive cultivation of medical marijuana in unincorporated areas.
Read more here:
http://www.times-standard.com/portal/localnews/ci_26820380/humboldt-supervisors-approve-medical-marijuana-nuisance-ordinance?_loopback=1

Supporters of Measure S filed a formal complaint with the Fair Political Practices Commission against several elected County officials and a public employee for their handling of Measure S, a voter driven initiative to replace the current County Ordinance on marijuana cultivation. The complaint alleges that County officials used public resources to state their opposition to the Measure in violation of CA State law.
Read more here:
http://yubanet.com/regional/ASA-Nevada-County-files-FPPC-complaint-against-Nevada-County-supes-elections-and-staff.php#.VFOz176_lUR

Del Rey Oaks took a big step toward becoming the county's first city to allow medical marijuana dispensaries, which are legal in California but have been shut out of local cities through zoning and code enforcement.
Read more here:
http://www.montereycountyweekly.com/blogs/news_blog/del-rey-oaks-on-its-way-to-opening-first-medical/article_9b048dd4-6058-11e4-b8f6-001a4bcf6878.html

A medical marijuana dispensary that Oceanside has been trying to shut down for more than a year finally agreed to close this week, city officials said.
Read more here:
http://www.utsandiego.com/news/2014/oct/29/oceanside-medical-marijuana-natures-leaf/

Santa Cruz is known for being relatively friendly to taxes and to marijuana. On Tuesday, voters in the city and county of Santa Cruz weigh those two together as they consider a new tax on medical marijuana businesses.
Read more and listen to the report here:
http://kazu.org/post/santa-cruz-voters-weigh-medical-marijuana-business-tax

Supporters and opponents of two marijuana cultivation measures on the fall ballot are stepping up the rhetoric and the donations with the general election set to take place next week.
Read more here:
http://www.lakeconews.com/index.php?option=com_content&view=article&id=39087:committees-to-support-oppose-marijuana-measures-report-on-finances&catid=1:latest&Itemid=197

After an initiative that would repeal San Jose’s new medical marijuana regulations garnered enough signatures to make it to the ballot, the City Council said on Tuesday that it will decide next week what steps need to be taken.
Read more here:
http://sanfrancisco.cbslocal.com/2014/10/29/san-jose-city-council-says-it-will-take-steps-to-counter-new-medicinal-marijuana-initiative/

Monday, November 3, 2014 - Marijuana Compassion and Common Sense (Online)
6:00 PM at www.blogtalkradio.com/marijuananews Tune in for this weekly live Internet broadcast about cannabis and medical cannabis issues. You can call in to participate.

---
Tuesday, November 4, 2014 – Election Day (Nationwide)
Get out and vote! Polls are open from 7:00 AM to 8:00 PM statewide. You can find your local polling place here: http://www.sos.ca.gov/elections/find-polling-place.htm and learn more about where state and federal candidates stand on medical cannabis here: http://www.VoteMedicalMarijuana.org

---
Thursday, November 20, 2014 –What Legalization Means for Medical Cannabis (Online)
7:00 PM online. Join ASA California Director Don Duncan for a live Google Hangout to discuss what legalization of cannabis means (and does not mean) for medical cannabis patients, providers, and other stakeholders in California. A Google Hangout is an interactive event you can join from your computer of mobile device. Click on this link a few minutes early to get signed in and participate in the Q&A/comments: https://plus.google.com/u/0/events/ck8r7cos98b1d6kqube10i4p2so Use this link to watch the broadcast live on YouTube (without signing in): http://www.youtube.com/watch?v=Tk8nCOm4UQs

Sign this online petition by Republican California Attorney General candidate Ron Gold asking the President to pardon Dr. Mollie Fry. Dr. Fry is in federal prison as a result of a medical cannabis conviction in 2001.