The first federal legislation to reform cannabis laws has been approved by the House. The historic bill, introduced by Rep. Ed Perlmutter (D, CO-7), would allow cannabis businesses access to banks and other financial services. The vote of 321-103 on HR 1595, the Safe and Fair Enforcement (SAFE) Banking Act, reflects strong bipartisan support, with 91 Republicans joining nearly every Democrat in voting in favor. The bill has been sent to the Senate committee on Banking, Housing and Urban Affairs.

“The potential benefits that patients stand to gain from passage of the SAFE Banking Act are significant,” said Sean Khalepari, ASA Regulatory Affairs Coordinator. “Americans for Safe Access is proud to have supported this historic bill since its introduction and reiterates its call for swift passage in the Senate.”

ASA supported the bill’s passage with written testimony and a letter to the House of Representatives. The SAFE Act was also supported by four major national financial associations and 50 state banking associations. Both groups also sent letters urging the House to approve the bill.

The SAFE Act could reduce costs for operating a medical cannabis business, which may result in lower prices for patients and increased access for those in need.

Access to full banking services would allow these businesses to accept credit or debit cards, process online orders, and provide cashless delivery services, all of which are important for those with mobility issues or whose chronic condition make travel to ATMs or dispensaries a challenge.

Providing protection to banks working with cannabis businesses may even move medical cannabis one step closer to being covered by insurance companies.

Action in the Senate is not assured, but the leading Democrat, Sen. Chuck Schumer (D, NY), said before the House vote that Congress needs to do more than just address the banking problem, including “decriminalization at the federal level, criminal justice reform, and investment in opportunity for minority & women-owned small businesses.”

Americans for Safe Access is urging federal action to address the vaping illness crisis. In a letter to the heads of the U.S. Food & Drug Administration (FDA), the Centers for Disease Control and Prevention, and the U.S. Department of Health and Human Services, ASA calls for the sensible regulation of vaporization products and cartridges and provides recommendations. ASA is asking the FDA to, at minimum, issue guidance that encourages consumers to only buy vaporization products in legal, licensed stores and not on the illicit market.

“The ongoing health crisis attributed to vaping highlights the need for regulations on issues such as third-party testing and accurate labeling,” said Heather Despres, Director of Americans for Safe Access’ Patient Focused Certification program. “For many medical cannabis patients, vaporization is a popular delivery method. Patients have a right to know what is in their medicine, and the FDA should recognize that the only way to prevent further health complications from vaping products is to allow a lawful, regulated marketplace for them to exist.”

ASA recommends that the FDA: 1) develop a recall and adverse event reporting procedure for cannabis and other vape cartridges consistent with other consumer protection laws; 2) promulgate good manufacturing practices for vape cartridges similar to those adopted by the American Herbal Products Association for plant-based material; 3) enforce OSHA guidance and other workplace safety regulations, including sanitization, for vape cartridge manufacturers; and 4) mandate that vape products undergo third-party laboratory testing and certification.

To date, there have been 380 confirmed cases of lung illness and six confirmed deaths attributed to vaping products. However, there has been no consistent e-cigarette or vaping product, substance, or additive that has been identified in all cases, nor has any one product or substance been conclusively linked to lung disease in consumers.

Until there is clarity as to what is causing these illnesses and deaths,ASA stronglyrecommends that patients and other consumers stop using cannabis-containing cartridges. ASA does not support outright bans on cannabis-containing cartridges or devices intended for the consumption of cannabis concentrates, which could cause more people to use the unregulated market and exacerbate the problem. Instead, ASA recommends bans on the inclusion of any additives (e.g., diluents, thickeners, flavoring agents) not derived from cannabis.

Patients and consumers are encouraged to use other legal delivery mechanisms that may be available to them in their state, such as dry herb (flower) vaporizers, tinctures, edibles, or topicals. They should only purchase cannabis products that have undergone testing at an independent, third-party laboratory that has verified composition and potency and screened for adulterants, contaminants, heavy metals, residual solvents, chemical residues, and other health concerns, such as mold and dangerous bacteria.

Since 2014, ASA has urged cannabis businesses to adopt third-party certification such as Patient Focused Certification (PFC). Through the PFC program, companies are required to adhere to safety, quality, manufacturing, testing, packaging, and labeling standards beyond those set by most jurisdictions where the medical and/or adult use of cannabis has been legalized. PFC companies are subject to both routine and unannounced inspections by independent auditors, which is especially important in light of the fact that jurisdictions may not have enough inspectors to ensure that all licensed operators are complying with all regulations. To ensure consumer safety and product quality, ASA recommends that patients and consumers ask about third-party certification at their local dispensaries.

“Americans for Safe Access started out in 2002 with the mission to not just ensure access to medical cannabis to patients across the county, but to ensure safe access,” said ASA Interim Director Debbie Churgai. “We will continue to do our part for patients, who are and always will be our highest priority, by keeping up the pressure on industry to adopt regulations that promote patient and consumer safety and by persisting in our advocacy for safe access to medical cannabis for patients everywhere,” she said.

ASA Interim Director Debbie Churgai led a free webinar "Medical Cannabis Access Across the U.S.: Resources to Help Grow the Industry" hosted by Women Grow last month. The webinar recapped ASA's State of the States report and explored ASA's many resources available that can help educate and advocate for safe access to cannabis in your state. The webinar discussed ways individuals can help the cannabis industry grow through educating policy makers, consumers, medical professionals, researchers, and the public.

The webinar can be viewed at www.safeaccessnow.org/womengrow19webinar 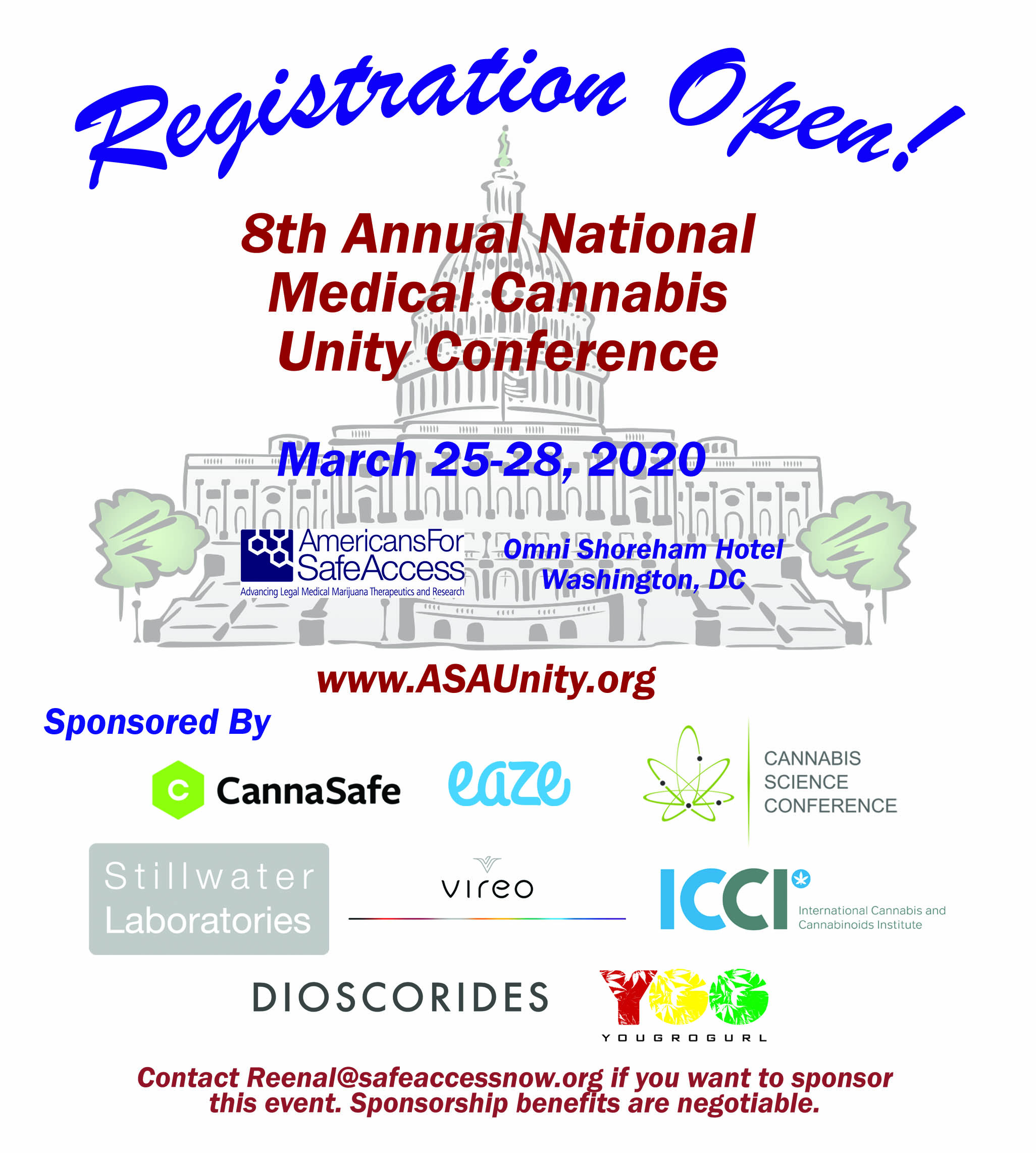 The keynote speaker will be the world-renowned cannabinoid research physician Ethan Russo, MD. A long-time supporter of Americans for Safe Access, Dr. Russo is a board-certified neurologist who has directed medicinal cannabis research at GW Pharmaceuticals and Phytecs. He is currently the Director of Research and Development for the International Cannabis and Cannabinoids Institute (ICCI). Dr. Russo has spoken at previous Unity conferences and always combines deep insights on the science of medical cannabis with an ability to clearly communicate.

For more information and to register for Unity 2020, visit www.asaunity.org. 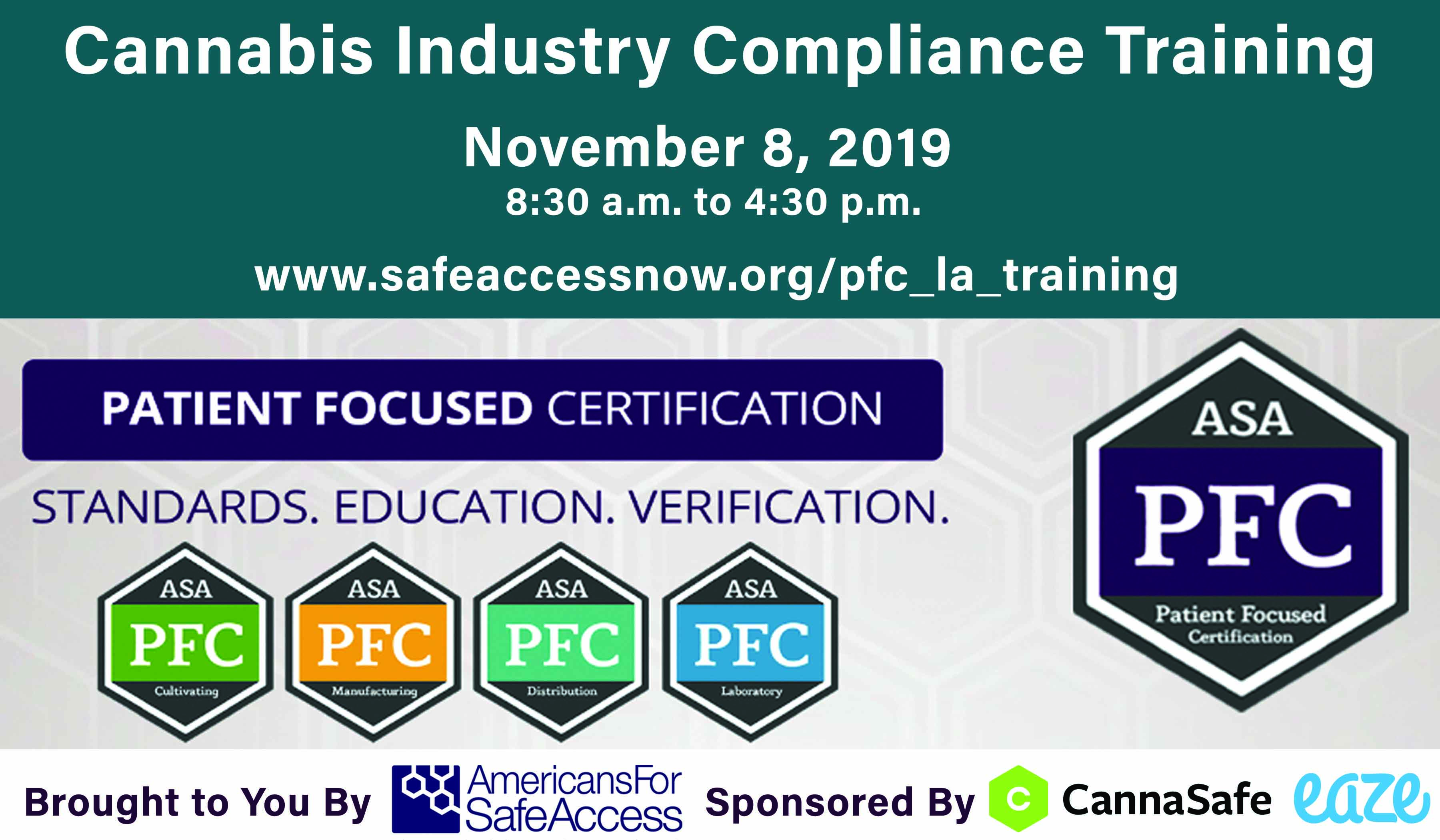 ASA will be hosting a one-day Patient Focused Certification training day in Los Angeles, California on November 8th, 2019.  The training will provide students with the newly updated PFC Core Cannabis Training courses as well as California state compliance training. Registered students will also be provided with an access code so that they may use the PFC online training portal to take course exams and get training certificates as well as take the National Cannabis Standards Training course (cultivation, manufacturing, distribution, or laboratory operations) of their choice online. Those not able to attend in person can also attend via a live stream Zoom Webinar. This training is made possible through the generous support of CannaSafe and Eaze.

For more information on the event, or to register, visit: www.safeaccessnow.org/pfc_la_training.

ASA to Host Event at MJBizCon 2019 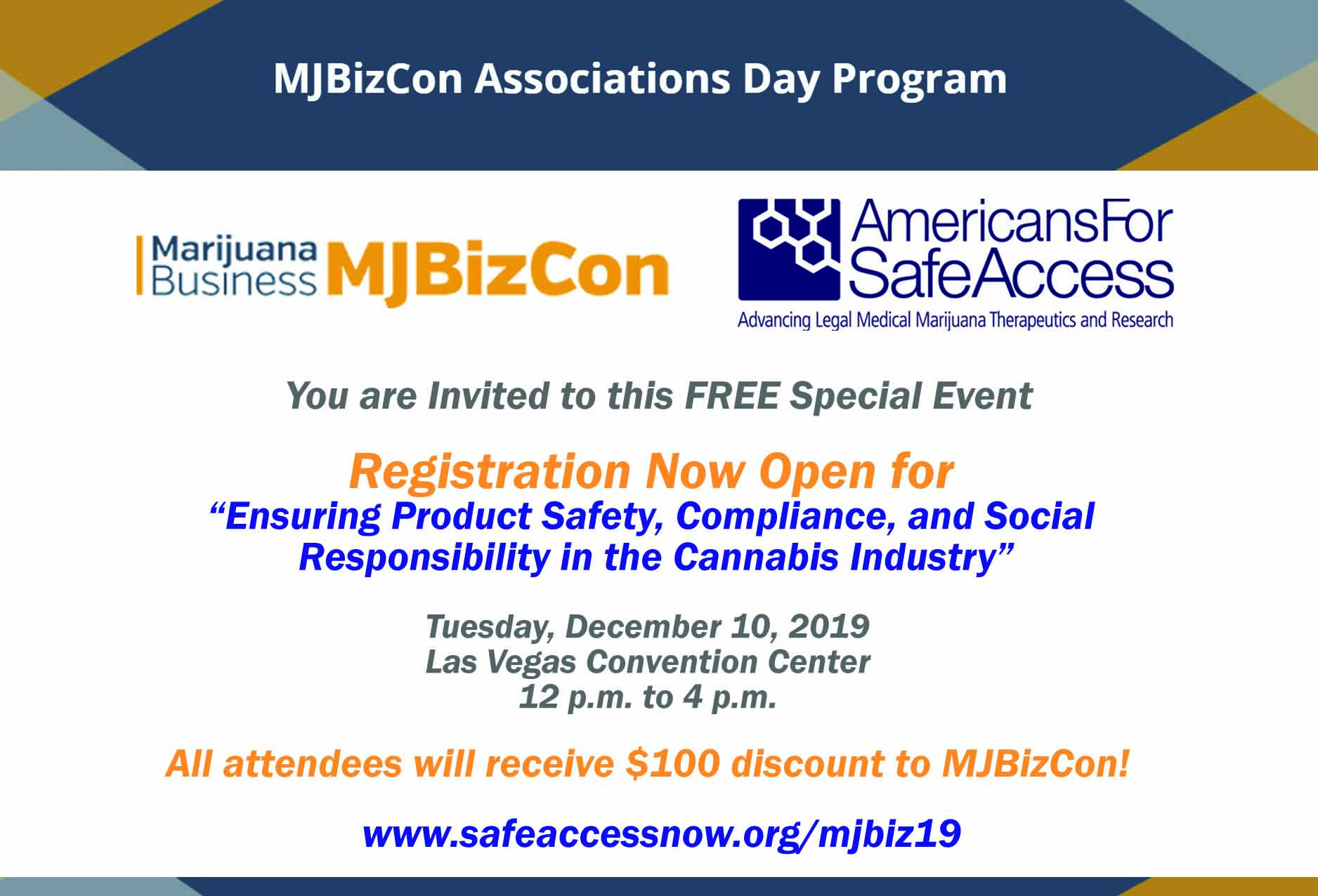 MJBizCon has selected ASA to organize an event for its Associations Day Program during its Las Vegas conference. The four-hour educational program, "Ensuring Product Safety, Compliance and Social Responsibility in the Cannabis Industry," will be December 10 from noon - 4:00pm. The event will include a PFC training on product safety and compliance as well as a roundtable discussion about social responsibility. More information will be released soon.

All registered attendees will receive a $100 discount for MJBizCon.

Current sponsors include: CannaSafe, Eaze, 3C Cannabis Consulting, Dioscorides, ICCI, and You Gro Gurl. If you are interested in sponsoring or speaking at our event, please contact [email protected]

For more information on the event or to register, visit: www.safeaccessnow.org/mjbiz19.

Garbielle Brown-Wing, a driving force in organizing a new chapter of Americans for Safe Access in Portland, Oregon, has come to medical cannabis activism gradually. A licensed massage therapist for more than a decade, Gabrielle began using cannabis topicals after a colleague recommended it. She had discovered in her early 20’s that cannabis helped with anxiety and depression, but when she found that the topicals helped ease the pain in her hands after work, she got a doctor’s recommendation to use it in 2016.

When she relocated from California to Oregon a year later, her fiancée got a job as a budtender in the Portland area, and she began to learn more.

“Before that, my involvement was as a medical consumer, but as he got more involved, I did, too,” Gabrielle says. “I became more interested in other medical applications, and started learning more about the ways practitioners were using cannabis topicals with clients.”

Soon, she was looking for job and volunteer opportunities that would allow her to be more involved with medical cannabis. 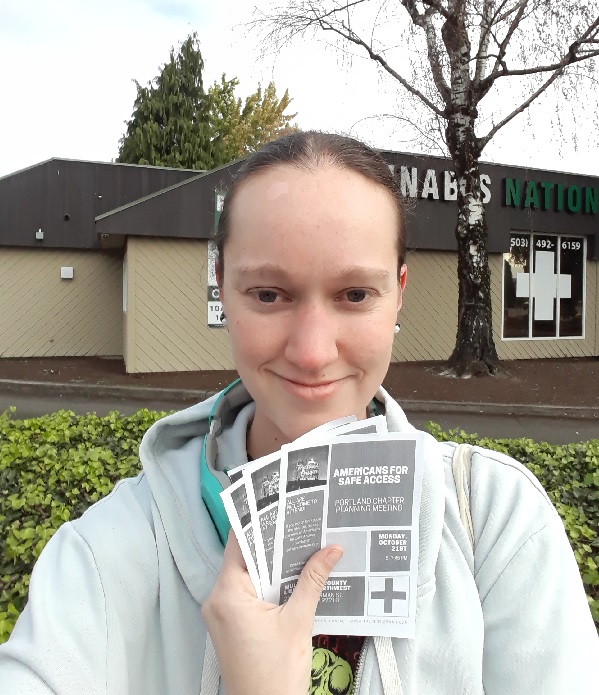 “I’d heard about ASA and donated years ago, so I went looking for a local chapter near Portland,” she says. “When I couldn’t find one, it seemed like a void and unmet need, so I decided to start organizing one.”

Gabrielle began reaching out around Oregon, soliciting advice and building a network. She discovered that patients were talking about how bad it had become since Oregon rolled out recreational access. She saw there was a need to unify the medical cannabis community to make social and legislative changes. Gabrielle launched an Instagram account at pdxsafeaccess and got lots of response from people around the state.

After meeting with several people and identifying a dozen potential charter members, she scheduled a planning meeting to review how to launch an ASA chapter and set priorities. This meeting is set for October 21 from 6:00-7:45 at the Northwest Multnomah County Library at 2300 NW Thurman Street in Portland.

“We’re looking for ways to engage the community,” says Gabrielle. “As I heard about the state’s problems with meth and other drugs in rural areas, ASA’s End Pain Not Lives campaign caught my eye as something to focus on.”

“The problem is stimulating a positive change to more transparency and accountability,” Gabrielle says, “We need that to be more the norm, not just a reaction to an emergency.”

Another focus of the new ASA chapter will be outreach to marginalized communities to inform them about options and facilitate accessibility.

“Whether it’s because of socio-economic status, race or immigration status, many people in these communities are unaware,” Gabrielle says. “Part of our advocacy efforts for the chapter has also been focused on reaching out to representatives of other organizations dealing with accessibility issues and poverty."

Registration is open for Unity 2020, so make your plans for joining us March 25-28 at the Omni Shoreham Hotel in Washington, D.C. Keynote speaker Ethan Russo, M.D. will be joined by panels of advocates and experts discussing the latest developments affecting medical cannabis patients. The annual citizen lobby day allows everyone a chance to meet with their elected representatives and make a difference in the direction of federal policy. Take advantage of Early Bird Registration today at www.asaunity.org.