Just in time for the Labor Day weekend, ASA released The Medical Cannabis Patient’s Guide for U.S. Travel. This guide helps patients understand the laws on access to cannabis when they travel to other parts of the country. The guide also contains helpful tips for patients to bear in mind while traveling. 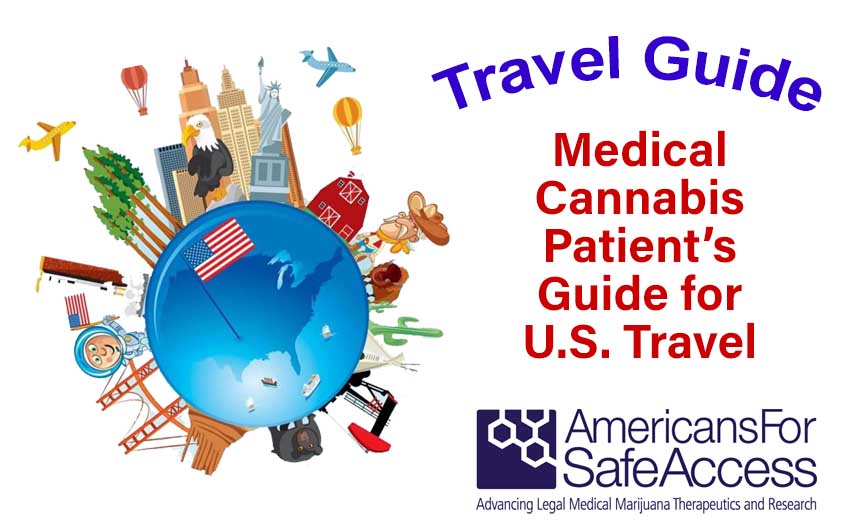 Forty-seven states and four territories currently have some form of medical cannabis law, but those laws vary dramatically. Some extend reciprocity to registered patients from other jurisdictions or permit the use of cannabis for all adults. ASA’s new guide helps patients who are unsure about their rights or how to access medical cannabis where they visit.

“Most people take for granted the ability to travel across state lines during a long holiday weekend. But for almost three million medical cannabis patients across the country, traveling can be a difficult undertaking,” said ASA Interim Director Debbie Churgai. “Many patients rely on their medicine every day, so patients need to plan ahead in order to know where they will be able to find medicine safely and legally.”

The new Medical Cannabis Patient’s Guide to Travel in the U.S. is currently only available as an online resource, but ASA is raising funds to turn it into a printed booklet that can be more widely distributed to patients. Design, printing and distribution can cost thousands of dollars, so all contributions are welcome at https://www.safeaccessnow.org/travel_donate.

Any dispensaries or other organizations interested in ordering copies of the travel guide should contact [email protected].

The U.S. Department of Justice (DOJ) announced last month that the long-stalled applications for cultivating research cannabis may have a path forward. The Drug Enforcement Administration (DEA) has filed a notice in the Federal Register of its intention to promulgate regulations for registering with the DEA that govern the growing of cannabis for scientific and medical research under DEA registration.

The DEA opened applications for prospective cultivators of research cannabis three years ago, but no action has been taken to issue new permits. The DOJ announcement comes just days before a court deadline to respond to a lawsuit by researchers seeking access to cannabis. Congressional lawmakers have also sought answers on the delay.

Over the past two years, the number of FDA-approved studies has increased by more than 40 percent to 542, as of January 2019. Currently only one facility, a farm at the University of Mississippi run by the National Institute on Drug Abuse, supplies all the cannabis for FDA-approved research studies. That limitation has prevented many studies from being able to obtain the materials needed to conduct research. Those researchers who have been able to obtain federal cannabis have frequently questioned the quality of the cannabis NIDA provides.

“After years of inexcusable delay, the DEA has finally taken a small step toward licensing new cannabis cultivation facilities for scientific research,” said ASA Founder and President Steph Sherer. “ASA has urged reform in this area for over a decade, and we hope that the DEA will move expeditiously now that the framework for license application review has finally been made public.”

The DEA in its notice announced that it will establish new rules for the cultivation of research cannabis before processing applications. A public comment period on those rules will allow stakeholders to be heard. No timeline has been announced for the rulemaking process.

The DOJ’s statement notes that under the 2018 Farm Bill, DEA registration is not required to cultivate hemp for research. 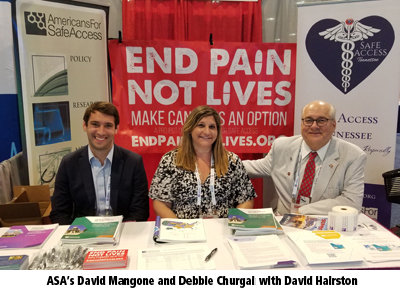 ASA also held two events during the Summit in Nashville. On Sunday, August 4, ASA held a pre-conference event co-sponsored with WM Policy (Weedmaps), which welcomed over 150 legislators to celebrate the release of ASA's "2019 State of the States Report: An Analysis of Medical Cannabis Access in the United States." Rep Bryan Terry, Chairman of the Tennessee House Health Committee, spoke during the event. His speech can be viewed here. 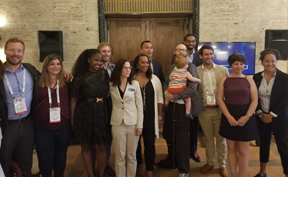 ASA staff were assisted at the summit by David Hairston, chairman of the ASA chapter Safe Access Tennessee. David was profiled in the May 2017 ASA Activist Newsletter.

The 2019 States Report can be downloaded for free at: https://www.safeaccessnow.org/sos.

Depres points out the facts to look for on labels of cannabis products, and how to use ASA’s recently published “Patient’s Guide to CBD” to find helpful tips on reading packaging and labeling as well as understanding certificates of analysis.

The blog also covers the risks of purchasing products outside the regulated marketplace and what patients or other consumers should do if they experience an adverse event, including the benefit of being honest with doctors.

Find out more on the ASA blog.

ASA’s Membership Coordinator Geoffrey Marshall provided tips for connecting with the cannabis community and helping build ASA’s advocacy strength on ASA’s blogthis month.  Among the opportunities are connecting through social media on Facebook, Twitter, Instagram, or Youtube and subscribing to ASA’s Medical Cannabis Brief newsletter for up-to-date medical cannabis news stories in a daily or weekly email. The blog also includes links for finding a representative from a local ASA chapter as well as ASA’s many free tools and resources.

How to connect with people in the community through outreach to dispensaries or the media are also discussed. Find out more on the ASA blog. 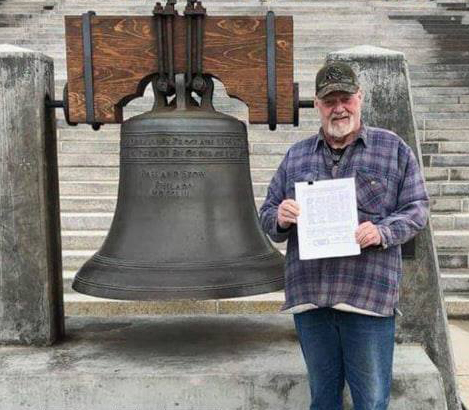 John Belville, 77, took an unusual path to becoming the Chief Petitioner for the medical cannabis initiative in Idaho that is currently gathering signatures.

John had become a drug and alcohol counselor in his forties, after a career as a musician traveling with various famous and not so famous bands. In 1974, he returned to Idaho to raise his own family, but his drug and alcohol abuse was running his life. In 1982, at the age of 40, he entered inpatient treatment and got sober. Three years later, he returned to college and completed a degree in Social Work and a minor in Abnormal Psychology at Boise State University. John worked with clients for 14 years until health problems forced an early retirement.

Those health problems were numerous and life threatening. He nearly died from complications due to diabetes and a double femoral artery blockage in both legs, plus an attack of necrotizing fasciitis, better known as flesh eating bacteria, all at the same time. The lack of blood flow in his legs left John with excruciating peripheral neuropathy in his legs that resulted in prescriptions for morphine, hydrocodone and occasionally oxycodone, and more drugs to treat the side effects. A full complement of opioids would reduce his pain but not eliminate it. Walking was painful, and he couldn’t sleep much.

Then he went to visit his son in Oregon.

“He said try this, and handed me some cannabis tincture, a 50/50 CBD and THC,” John says. “’Yeah sure, right,’ I said. I knew drugs, and a little weed wasn’t going to do anything.”

Like many people, John had to overcome misconceptions about what the medical use of cannabis means--all the more so because of his background as a recovering alcoholic and a counselor.

“Five minutes later I was pain free. From a five on the pain scale with the morphine to a zero. I was amazed.”

Adding the cannabinoids achieved what the opioids alone could not, and with no side effects, including intoxication. The tincture didn’t get him high; it just eliminated the pain.

“Morphine and hydrocodone helped with pain, but I couldn’t think, and sleep was always a problem,” John says. “I’d take a time-release morphine before bed, but six hours in, I’d be awake with pain and have to get a hydrocodone. A little tincture, and I’d go right back to sleep with no pain.” 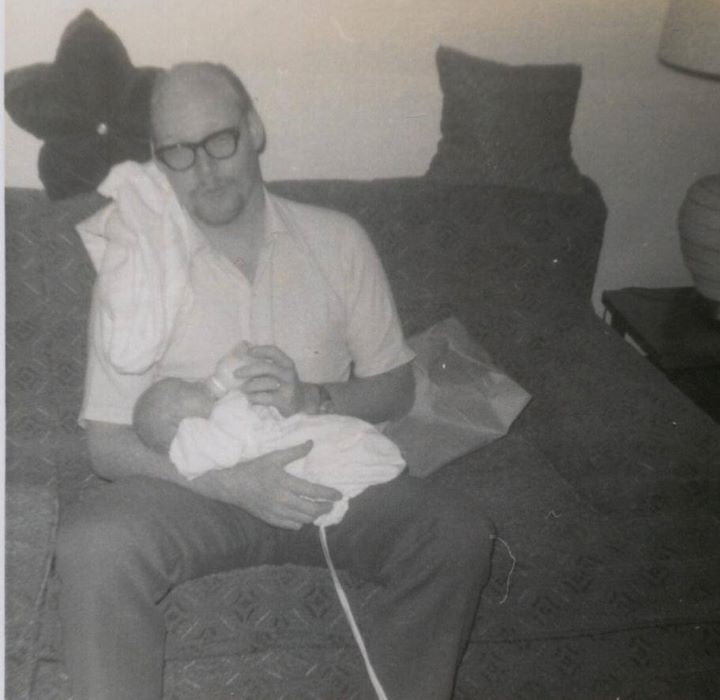 As successful as his experience with cannabis tincture was, John still had a problem. He was only visiting Oregon, and Idaho, where he lives, is one of the three states remaining with no medical cannabis law of any kind.

“My kid as a joke said ‘you’d be perfect as a chief petitioner,” John recalls. “You’re an ex-alcoholic, cleaned up, now a counselor.”

On Tuesday, June 25, John went to the state capitalwith other patient advocates to file the paperwork that began the process of qualifying the Idaho Medical Marijuana Act for the November 2020 ballot. They have until August 30 to gather and submit to the Idaho Secretary of State more than 55,000 signatures.

“It’s been fun,” John says. “My wife and I went to the farmers’ market last weekend and collected about 100 signatures. The older folks are all for it. They understand why we need it.”

Signature gathering events this month include September 6 - 8 at Julia Davis Park in Boise, September 7 in Jerome, and September 13-15 at Hyde Park in Boise. Activists can also download the 10-page petitionand gather signatures themselves.

Your state lawmakers need to know how to better meet the needs of medical cannabis patients. Use the link below to send them ASA State of the States Report so they have the tools to improve safe access in your state. It’s quick and easy, so take action today!