On April 14, Governor Martin O'Malley signed HB 881 into law, making Maryland the 21st medical cannabis state. The Maryland House of Delegates had voted 125-11 the week before to adopt the bill, which will protect registered medical cannabis patients from arrest and prosecution. Patients with state-issued registry cards will be able to obtain their medicine from licensed dispensaries, which will rely on licensed growers for their supply of medical cannabis. Patients with severe pain, nausea, wasting syndrome, seizures, and severe muscle spasms will be required to get approval from physicians who are certified by the state, and must obtain an identification card before they will be eligible to access a licensed dispensary. 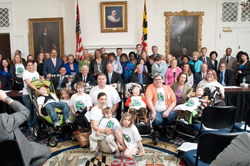 "This law will at long last provide Maryland's patients with needed protection from arrest and prosecution, and give them a means to safely and legally obtain medical cannabis," said Mike Liszewski, ASAs’ Government Affairs Director, who testified before House and Senate committees in support of the law. "We’re glad to see an end to half-measures in the state."

Maryland has struggled over the past few years to create workable medical cannabis legislation. In 2003, the Maryland legislature adopted the Darrel Putnam Compassionate Use Act, which provided an affirmative defense but did not prevent patients from being arrested, prosecuted or having to pay a fine. Last year, the legislature passed HB 1101, which would allow "Academic Medical Centers" to distribute cannabis to patients, but eligible hospitals declined to participate. HB 881 gives regulatory control of dispensaries to the Natalie M. LaPrade Medical Cannabis Commission, which was established under last year's legislation.

HB 881 was sponsored by Delegate Cheryl Glenn (D-Baltimore) and co-sponsored by nearly half of the House. A broad coalition came together to support the bill, including ASA, industry stakeholders, and Stop the Seizures, a parents group. Several versions of the bill were considered and many amendments were added by Senator Jamie Raskin (D-Montgomery) to help patients navigate the program.

Patient Advocate of the Year: Sarah Shrader is known for creativity, compassion, and hard-work. A founding member of SF ASA, she helped pass the first distribution laws before going on to start Sonoma ASA. From organizing DA debates and court support to guiding patients through the legal system, her work has helped thousands of patients.

Courage Award: Bunny Balk got a scholarship to ASA’s 2013 National Conference where she developed new advocacy skills that she used to start an ASA chapter in Wisconsin.

Action Group of the Year: The Ventura Action Group has held many events. Their rally at Ventura City Hall and ‘Patients are not Criminals’ campaign were great successes.

Patient Lobbyist of the Year: Marina Faz-Huppert is the legislative and political director for Local 881 United Food and Commercial Workers International Union, representing members throughout Illinois and NW Indiana.

Researcher of the Year: Noel Palmer is an analytical chemist and Laboratory Director for PalliaTech and PhytaTech CO. He worked closely with ASA and the American Herbal Products Association in drafting the Industry Standards for Laboratory Testing for cannabis.

Elected Official of the Year: Earl Blumenauer (Ore-3) has sponsored multiple bills on behalf of medical cannabis. He accepted with a video statement for the dinner.

Patient Partnership Award: Roy Upton, RH, DAyu, is the founder, executive director, and editor of the American Herbal Pharmacopoeia (AHP), where he led the development of the AHP’s landmark Cannabis Monograph.

Medical Professional of the Year: Stephen Corn, M.D. is an anesthesiologist, researcher, inventor and Harvard Medical School professor who cofounded the educational website TheAnswerPage.com that works with ASA to provide information about medical cannabis.

ASA has relaunched its VoteMedicalCannabis.org website, an interactive online tool that provides voting statistics and a report card onhow each Member of Congress has voted on patient issues.

"We're making great progress persuading Congress on medical cannabis," said ASA Executive Director Steph Sherer. "Our elected representatives in D.C. are making policy decisions that affect millions of patients in the U.S., and it's important for the public to know how they're voting."

VoteMedicalCannabis.org contains the voting record of Members of Congress since 2012, as well as the legislation they have sponsored or cosponsored during the current Congress (2013-2014). The new website assigns a grade of ‘A’ to ‘F’ for individual House Members, and a pass/fail "grade" for individual Senators. The site identifies as "Patient Champions" any co-sponsors of legislation that would protect state medical cannabis laws or contribute to a comprehensive federal policy.

The site provides details on last week’s vote to allow Veterans Administration (VA) physicians to recommend medical cannabis for their patients. Although the amendment didn't pass, it received more "yes" votes from Congress than any other previous effort to reform federal medical marijuana policy.  The unprecedented 195 votes in favor, made up of 173 Democrats and 22 Republicans, included a majority of freshman Members of Congress (42 Democrats and 2 Republicans).

The last vote on medical cannabis in Congress was in 2012, when an amendment to an appropriations bill was introduced to restrict funds that the Department of Justice (DOJ) spends on enforcement in medical cannabis states. At that time, the amendment received 163 votes in favor.

For more than a decade, polls have shown that 80 percent of Americans support medical cannabis, but that popular support has not been reflected in how Congress votes on this issue. VoteMedicalCannabis.org may help change that political disconnect.

Family members from a rural area of eastern Washington face trial on federal marijuana charges, despite the Obama Administration's repeated claims that it does not target patients. The federal trial of the "Kettle Falls Five" before U.S. District Judge Fred Van Sickle begins May 12 in Spokane, Washington. Because marijuana is prohibited for any use under federal law, patients and caregivers are routinely denied any type of medical necessity or state law defense in federal court. 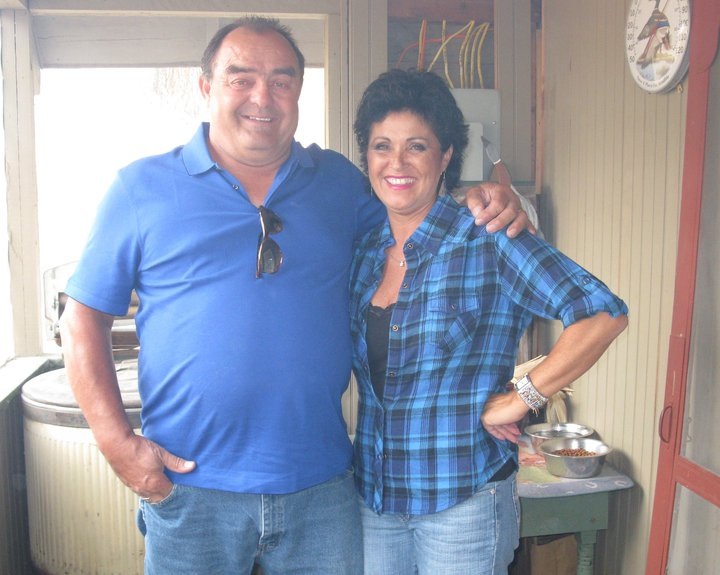 Federal agents raided the property of Larry Harvey, 70, and his wife, Rhonda Firestack-Harvey, 55, at their family home near Kettle Falls, Washington in August 2012. In addition to seizing 44 immature cannabis plants, the Drug Enforcement Administration (DEA) confiscated the family's car, $700 in cash, and their legally owned firearms.

The five federal defendants, including Mrs. Firestack-Harvey’s son, Rolland Gregg, and his wife, were all qualified patients in compliance with Washington state law. Defense attorneys say the cannabis being cultivated on a remote corner of the family's 33-acre property was strictly for use by the five qualified patients. Mr. Harvey, who suffers from numerous ailments including heart disease and severe gout, was jailed for several days and denied medical attention, which resulted in irreversible bodily harm.

The federal trial of the five comes despite Department of Justice (DOJ) directives issued in June 2011 and August 2013, both of which reiterate long-standing DOJ guidance to federal prosecutors that individual patients should not be a priority. In the latest memorandum, Deputy U.S. Attorney General James Cole stated that it is "not an efficient use of federal resources to focus enforcement efforts on seriously ill individuals." Those memos are not binding, however, leaving U.S. Attorney for the Eastern District of Washington Michael Ormsby free to decide which cases to prosecute.

"This case is another glaring example of what's wrong with the federal policy on cannabis," said Kari Boiter, ASA’s Washington State Coordinator. "If the U.S. Attorney can continue to aggressively prosecute individual patients without any consequences from the White House, none of these DOJ memos are worth the paper they're printed on."

The federal prosecutions of these patients has continued even after Washington voters approved Initiative 502 in November 2012, legalizing recreational use of cannabis in the state. The Kettle Falls Five were indicted in February 2013 and charged with six felonies each: conspiracy to manufacture and distribute cannabis, manufacture of cannabis, possession with intent to distribute cannabis, distribution of cannabis, possession of a firearm in furtherance of a drug trafficking crime and maintaining a drug-involved premises.

Only 44 plants were seized at the time of the 2012 raid, but federal prosecutors have charged the defendants with growing more than the 100-plant threshold that triggers a five-year mandatory minimum sentence by alleging there were more plants grown in previous years. The gun charge carries an additional five-year mandatory minimum sentence. Prosecutors are seeking a minimum of 10 years to life in prison, despite repeated calls by U.S. Attorney General Eric Holder in recent months for reforming mandatory minimum sentencing for non-violent drug crimes. As part of a joint defense agreement, attorneys sent a letter to Attorney General Holder in February, asking him to reconsider the prosecution.

Seth Greene from Bluff City, Tennessee has been lobbying his representatives to make medical cannabis legal and used the National Unity Conference Lobby Day on Capitol Hill to meet with staffers for Tennessee Senators Lamar Alexander and Bob Corker.

The 23-year-old activist treats his cerebral palsy and Seizures Artistes MS with cannabis on the advice of his doctor, even though he “hates breaking the law.”

“The time I had at the Conference in D.C was unbelievable. I felt safe and normal, and I learned a lot,” he said.  Seth is raising funds to pay for a move to Denver, Colorado at giveforward.com.

ASA’s Spring Membership Drive is your chance to take advantage of exclusive member benefits.  Join during the month of May and receive special ASA merchandise.

As an ASA Member you’ll not only be part of making safe access a reality everywhere, you’ll get special members-only discounts on ASA publications, priority access on ASA’s legal support hotline, and discounts on ASA conferences and other events.

You’ll also get discounts on a wide variety of products and services, including Cannabis Training Institute, Hertz car rentals, Peace Coffee, and up to 60% off Working Advantage entertainment products, including tickets to ski areas, amusement parks, zoos and museums, and much more. Check out all the benefits here: www.safeaccessnow.org/membership_benefits

George and Garrett Vogel appeared on stage together at the National Unity Conference to tell their father-son story of discovering the healing power of cannabis and becoming advocates. Sadly, George died shortly after the conference due to complications from a surgery. Garrett said his father was “so proud” of speaking at the conference and is grateful they had a last chance to bond there in a “last hurrah.” Our heartfelt condolences go out to Garrett and the rest of the Vogel family.

ACTION ALERT: How Did Your Rep Vote on VA Access?

Congress just held an historic vote on medical cannabis. How did your Representative vote? Find out now at VoteMedicalCannabis.org and send a message of thanks or disappointment. Contact your Congressional Representative today with ASA’s easy online tool! AmericansForSafeAccess.org/veteransvote.

To download a PDF of this newsletter to print and distribute, go to AmericansForSafeAccess.org/may2014_newsletter.