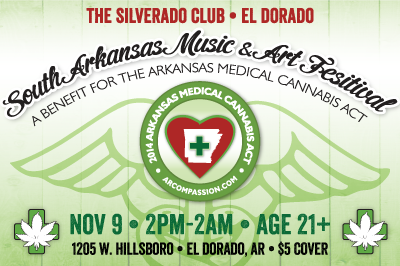 Medical marijuana advocates Arkansans for Compassionate Care (ACC) and Americans for Safe Access (ASA) have joined forces to put an initiative on the 2014 ballot. The Arkansas Medical Cannabis Act (AMCA) is a comprehensive blueprint for establishing and regulating a medical marijuana program run by the Arkansas Department of Health. Advocates are launching their fundraising campaign at 2pm this Saturday, November 9th with a Budweiser-sponsored, all-day concert at the Silverado Club, 1205 W. Hillsboro Street in El Dorado. Budweiser has underwritten the venue and a portion of the beer sales will go to ACC.

If passed, the AMCA would allow Arkansas patients with a doctor’s recommendation to use medical marijuana for serious debilitating medical conditions. Patients would also have the option to purchase medical marijuana at well-regulated, not-for-profit dispensaries or cultivate it themselves under strict conditions. Last November, nearly 49 percent of Arkansas voters -- over half a million -- voted for a similar medical marijuana initiative. Since then, three additional states -- Illinois, Massachusetts, and New Hampshire -- have adopted medical marijuana laws, bringing the total to twenty, plus the District of Columbia.

Notably, Asa Hutchinson, formerly a U.S. Attorney, Member of Congress, and head of the Drug Enforcement Administration (DEA), announced his plans earlier this year to run for Governor of Arkansas. Americans for Safe Access was formed in 2002 during Hutchinson's time as DEA administrator and deliberately chose the acronym ASA to draw attention to Hutchinson's aggressive attacks against medical marijuana at the time.

However, during a 2011 debate at the University of Arkansas in Fayetteville between Hutchinson and Drug Policy Alliance Executive Director Ethan Nadelmann, Hutchinson stated that, "if there is a medical need and the doctors say you need a particular substance -- whether it is Marinol or marijuana or whatever -- if the doctor or medical community says that, then patients ought to be able to get that."

And we agree. That's why we are spreading out across the state of Arkansas to collect more than 62,000 signatures by the July 7, 2014 deadline in order to qualify for the ballot.  But we need your help to do it.

Help us raise $10,000 to bring Medical Marijuana to the South!

Signatures for the petition must be signed in person, and this is where we need you.  Help us raise $10,000 to print more petitions.  We still have over 50,000 signatures to collect before our July 2014 deadline.  The AMCA Music Festival sponsored by Budweiser will feature seven bands and twelve artists, as well as a voter registration booth and petition-signing table.  This is our chance to bring safe access to the South.  Donate to the campaign today!

Want to take action? Become a volunteer. Our volunteers are the most important part of the campaign, and we cannot be successful without your help.  Click here to see how to get involved.

The petitions to get medical cannabis on the ballot in Arkansas must be signed in person, so bring a friend and join us at the AMCA Music Festival for a night of good music for a great cause.

Check out the 2011 debate at the University of Arkansas