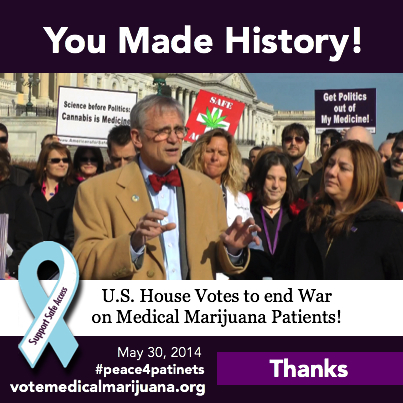 Remember when we told you that YOU controlled the war on Patients.  Well, last tonight you did it! ASA Members and advocates all over the county won what might be the biggest victory yet in the fight to end federal interference and intimidation in medical cannabis states.

In response to our unprecedented grassroots and media campaign, the US House of Representatives voted to cut off funding for federal raids, arrests, and prosecutions in states where medical cannabis is legal. Thank you for taking action by calling and emailing your Representatives.  Together we have made a difference.

By a vote of 219 to 189, the Republican-dominated House approved the Rohrabacher/Farr Amendment to the Commerce, Science, and Justice (CJS) Appropriations bill. The CJS bill is the vehicle that funds the Department of Justice (DOJ) and the Drug Enforcement Administration. This amendment will prohibit the DOJ from using any funds to prevent states from implementing their own state laws that authorize the use, distribution, possession, or cultivation of medical cannabis.

This is a major milestone in changing federal law. We still have battles to fight, but we are measurably closer to ending the federal threat to safe, legal, and dignified access to medical cannabis for everyone who needs it.

I need your help right now to capitalize on this momentum. ASA and the millions of Americans who believe in medical cannabis need to be more vocal, more visible, and more active than ever before. ASA can make that happen, but we need your support right now.  Will you help me do it by making a special contribution to ASA today? We will put that money to work tomorrow in the local, state, and federal fight for medical cannabis.

I hope you are as proud and encouraged by this victory as I am. Support and participation from people like you made this twelve-year campaign possible. Thank you for that, and thank you for helping us keep on fighting.