“I just met with my Representative,” exclaimed a wide-eyed participant from Bonney Lake.  “I went in there and built a relationship with her, just like you said, and it worked,” said the man with a chuckle and grin.

As Steph Sherer and I hustled around Olympia last week, we heard the same refrain echoed repeatedly. From patients to policymakers, there is a newfound exuberance about medical cannabis that has been missing from the conversation until now. Even the security guards were quick to offer praise, pulling organizers aside to mention how nervous they were initially, mainly due to the sheer volume of attendees, but how pleased they were with the ultimate outcome. The positive feedback reverberated all the way to the Governor’s office and then bounced back, rippling through the Legislature a second time around by week’s end. Medical cannabis has undoubtedly turned over a new leaf. 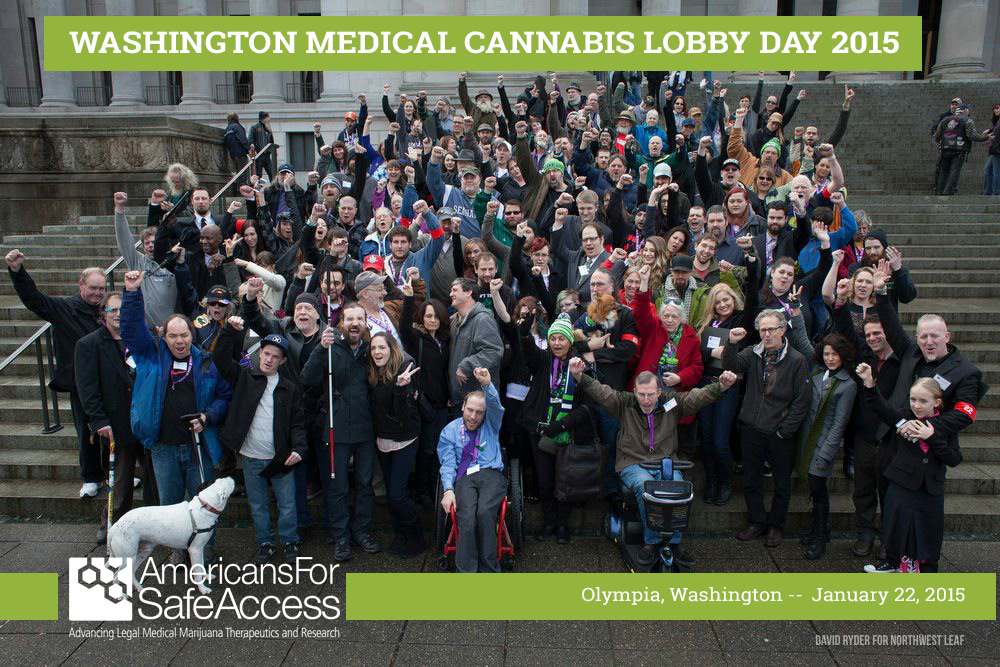 What a Difference a Day Makes
With more than 300 medical cannabis supporters converging on the Capitol from nearly every district in the state, it didn’t take long to pack the conference room to capacity, requiring an overflow room before the day’s events ever began in earnest. Guest speakers seamlessly transitioned back and forth between rooms, making sure every attendee received assistance navigating the jam-packed itinerary.

The goal of Medical Cannabis Day at the Capitol was simple. Rather than pass or oppose a specific piece of legislation, we focused on repairing the tarnished image of medical cannabis patients and giving people the tools needed to engage in effective citizen advocacy. Participants were encouraged to focus on establishing a respectful, informative dialogue with elected officials that can be used as a sounding board throughout session and beyond. Mission accomplished, judging by the headlines alone:
“Sunday Spin: A Cosmic Shift in Pot Hearings?”   –The Spokesman Review
“Hundreds Expected in Olympia as Lawmakers Weigh Medical Pot”   –The Columbian
“2015 Legislature: Who Should be Arrested for Marijuana?”   –Seattle P.I.
“Pot for Medicine and Fun: Regulatory Merger Ahead?”   –Crosscut
“Medical Marijuana Patients Fight to Save Medicine” –KIRO TV

By any standard, invalidating the prevalent anti-patient rhetoric should be considered a victory. Another way to gauge success lies in the response from lawmakers, several of whom complimented their constituents on a job well done, while others commented to colleagues about the helpful demeanor of the cannabis crowd this year. But perhaps the strongest indicator of effectiveness was the public about-face by Senator Ann Rivers less than 24 hours later, who now reportedly plans to revise her bill to remove restrictions on sales of dried marijuana flowers. This proves that patients have the power to change policymakers’ minds. 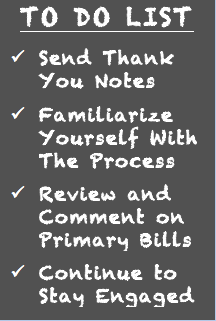 What’s Next
Now, it’s time to build on our collective success, starting by sending lawmakers a “Thank You” note and any follow up information promised in last week’s meetings. This is the easiest way to continue the dialogue that you started last week. You will also want to become more familiar with the Legislative process. Never read a bill before or unsure what it takes to become law? You’re not alone! Here are a couple of fact sheets on How to Read a Legislative Proposal, along with a General Overview of the Legislative Process. This information will be helpful as you review the SIX main legislative proposals that aim to regulate the existing medical marijuana industry: Senate Bill 5052 (Rivers), Senate Bill 5519 (Kohl-Welles), House Bill 1020 (Appleton), House Bill 1461 (Hurst), House Bill 1698 (Appleton) and House Bill 1766 (Cody).

You can also look bills up by number, sponsor, topic, committee and more, using this online legislative tracker. As you're reviewing legislation, pay close attention to the green highlighted box in the upper right hand corner of the bill history page that says, “Comment on this bill.” If you click on the provided link, it takes you to a page that allows you to send short comments (1000 characters or less) to every single member of the Legislature at the same time. Let policymakers know whether you support, oppose or feel neutral about a particular bill. Try to be specific about your concerns and offer solutions that work. Don’t forget to always put your best foot forward by being polite and avoiding harsh language.

Similar rules apply when providing public testimony at a committee hearing, where remarks are often limited to two minutes or less. Here are some handy guidelines for How to Testify in Committee and a tutorial on How to Track Bills throughout the Legislative process. Want to learn even more? Check out these educational and instructional materials from the Legislative Information Center website.

Remember, the knowledge that you arm yourself with right now will better prepare you for the day when an elected official calls on you for help. When it’s all said and done, only YOU have the ability to nurture the key relationships forged through Medical Cannabis Day at the Capitol. Don’t let this opportunity to influence the future pass by unnoticed.