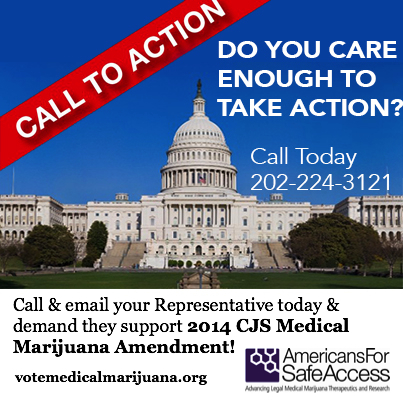 This week, a bipartisan amendment to the 2014 CJS Bill will be introduced that will cut the Department of Justice's (DOJ) funding to interfere with the implementation of state-approved medical cannabis programs. This would mean that for the next fiscal year, the DOJ would not be able to halt the progress being made in several medical cannabis states as they begin implementing their programs and providing medicine to qualified patients.

This is our moment to make a difference. Demand Congress support the 2014 CJS Medical Marijuana Amendment!

The amendment currently has 10 sponsors, 5 Republicans and 5 Democrats [Dana Rohrabacher (R-CA), Sam Farr (D-CA), Don Young (R-AK), Earl Blumenauer (D-OR), Tom McClintock (R-CA), Steve Cohen (D-TN), Paul Broun (R-GA), Jared Polis (D-CO), Steve Stockman (R-TX), and Barbara Lee (D-CA)], but we need your help reaching out to all Members of Congress to ask for their support when it comes to a vote on the House floor this week.

With well over 20 states nationwide that have passed medical marijuana laws, public opinion has never been more favorable on the issue. A recent FOX News poll showed over 85% support for medical marijuana nationally. It is estimated that there are over 1 million legal medical marijuana patients throughout the US, many of whom are suffering from terrible maladies and depend on access to marijuana to maintain their quality of life.

We are closer than ever to passing reform in Congress and now is not the time to sit on the sidelines. Call and email your Representative today and ask them to support cutting the DOJ's funding for interference in the implementation of medical cannabis programs.