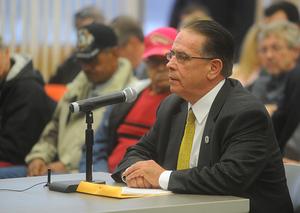 State Rep. Alan Silvia got the facts wrong when he wrote that there is no difference between medical marijuana and “street” marijuana, Guest Opinion, Oct. 30. There is at least one big difference: Who uses it and why.

Clinical trials have proven that medical marijuana can help patients suffering with certain conditions like cancer, multiple sclerosis, and neuropathic pain. Many patients in Fall River need safe access to this medicine because they want to reduce their use of the same narcotics that Silvia acknowledges are a “huge problem.” These are not recreational users; they are patients using medical marijuana under the supervision of their doctors.

Silvia is wrong when he says that medical marijuana provided by dispensaries has “the same quality, same risks” as “street” marijuana. In fact, medical marijuana from dispensaries will be tested to ensure it is free of mold and other contaminants that can be life threatening to some patients. Most importantly, dispensaries eliminate the risk of patients seeking medicine in back alleys or simply going without. Dispensaries are an important resource for patients; when they are well regulated they have a positive impact on communities.

Regulations for the medical marijuana program balance the needs of patients and the greater community in many ways. For instance, no more than one dispensary will be licensed to operate in Fall River. Strict security plans are required, and all sales will be tracked by the state. As an additional safeguard against misuse the law created a new felony for anyone who attempts to defraud the system for profit.

Furthermore, studies show that there is no correlation between medical marijuana laws and youth rates of use. Preventing youth drug use is vitally important, but we can do so without depriving suffering patients a doctor-recommended treatment.

It’s time that policy makers started supporting sensible and well balanced drug policies based on proven public health principles rather than “tough on drugs” rhetoric. A good first step is getting the facts straight on the difference between medical and recreational use of marijuana and other drugs.