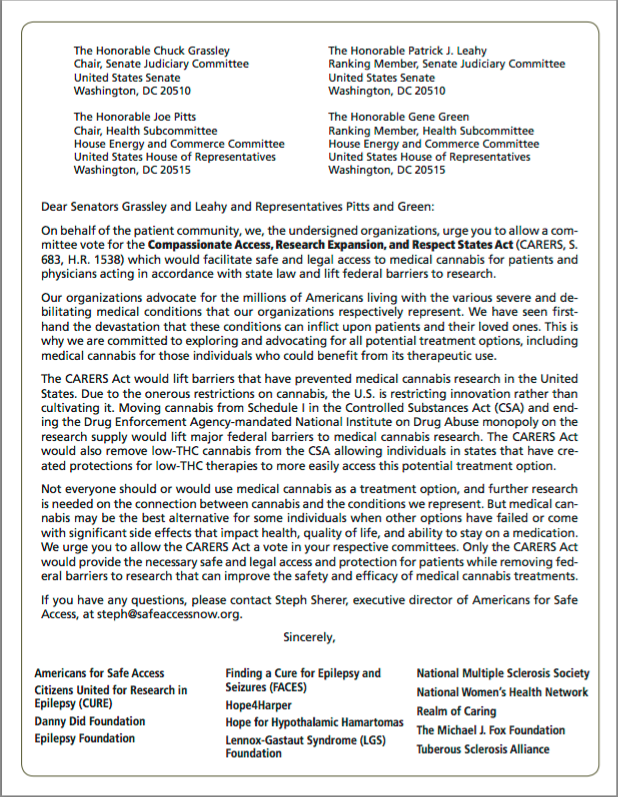 “The Epilepsy Foundation strongly supports the CARERS Act and we thank all the members of Congress who have signed on to this important legislation,” said Phil Gattone, president & CEO of the Epilepsy Foundation. “Lifting federal barriers to cannabis research would allow families and providers considering this treatment option to have the information they need to make educated decisions, while supporting safe, legal access to medical cannabis.”

“This letter represents the growing number of voices in the patient community joining the call for committee leaders to allow the CARERS Act a committee vote,” stated Beth Collins, Senior Director of Government Relations and External Affairs for ASA. “We urge Senator Grassley and Representative Pitts to listen to the many Americans who support medical cannabis and the more than 2 million people who already benefit from cannabis as a treatment option by giving CARERS an opportunity for a vote.”

The letter comes on the eve of Senator Lindsey Graham’s Senate hearing, Researching the Potential Medical Benefits and Risks in the Judiciary Subcommittee on Crime and Terrorism. Patients and activists are encouraged by Senator Graham’s interest in moving this issue forward, and hope that Senator Grassley and Representative Pitts will allow the CARERS Act a committee vote.

Copy of Letter from Organizations

Online version of the petition