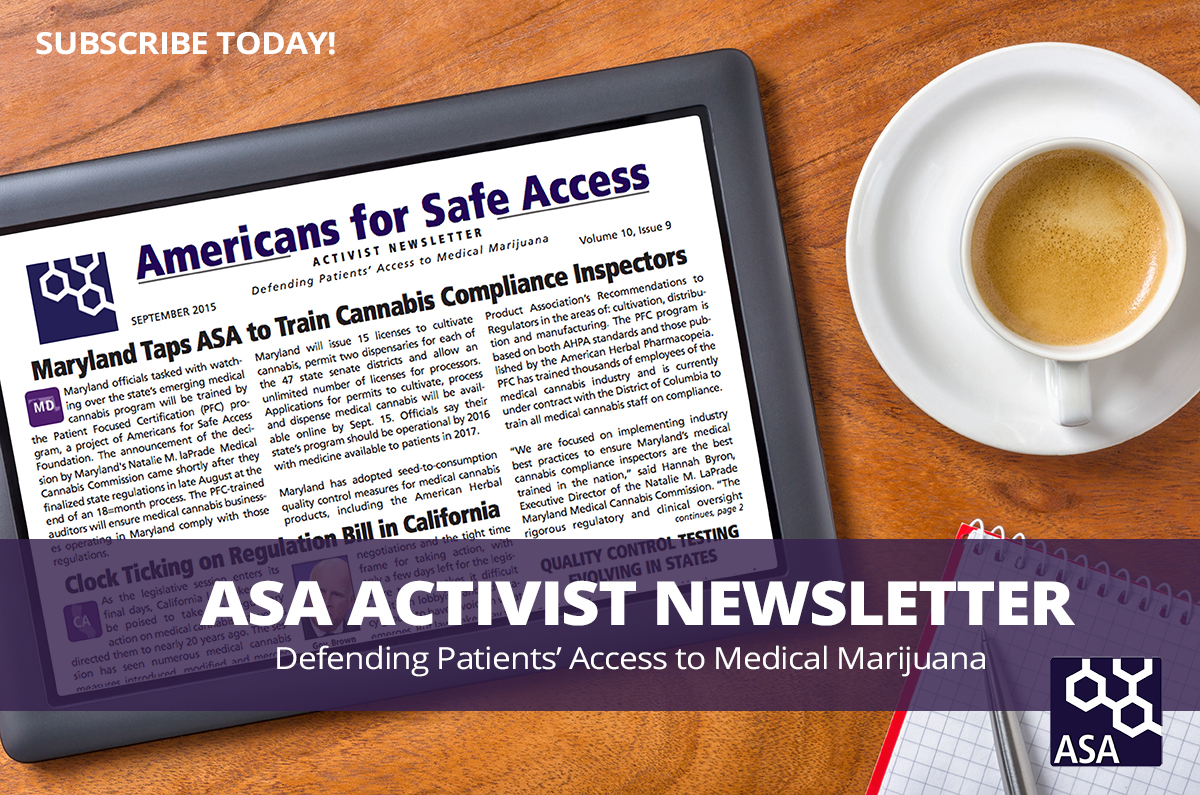 The October 2015 issue of the ASA Activist Newsletter is finally out!  Our monthly newsletter is your go to guide for the most up to date information on state and federal legislation, product safety, citizen advocacy and so much more!

Federal prison sentences were handed down Oct. 2 for the three remaining defendants in the Kettle Falls Five case in Washington State. The case has received national attention as an example of federal interference with state-qualified medical cannabis patients, and lobbying by Larry Harvey, a defendant in the case who died last month from cancer, was instrumental in getting Congress to restrict Department of Justice enforcement in states with medical cannabis laws.

Larry Harvey’s widow, Rhonda Firestack-Harvey, and her daughter-in-law Michelle Gregg were each sentenced to one year and a day. Rhonda’s son, Rolland Gregg, received a sentence of 33 months. All three were released pending appeal.

They were each charged with multiple federal felonies that carried stiff mandatory minimum sentences after a 2012 raid on the family’s personal cannabis garden in rural Washington State, even though there was no evidence of distribution and the garden was clearly marked as medical. The defendants were barred from raising a medical necessity defense, despite being qualified patients in Washington State. The jury acquitted them of all the government’s primary charges but found them guilty of “manufacturing” fewer than 100 plants.

“Federal prison time for patients who were participating in an established state medical cannabis program is an embarrassment to our judicial system and a violation of the restrictions Congress placed on the DOJ,” “We’re calling on President Obama to pardon all three defendants immediately.”

Nearly 20 years since California voters made medical cannabis legal, their state legislators have finally passed a trio of bills that would establish comprehensive regulation and licensing of commercial distribution. Governor Jerry Brown has until October 11 to sign or veto the bills. If he does nothing, they become law.

Maryland has begun accepting applications for operating medical cannabis businesses in the state, with a deadline of November 6. Separate licenses will be issued for cultivating, processing and dispensing medical cannabis. A maximum of 15 cultivation facilities and up to two dispensaries for each of the state’s 47 senate districts will be licensed. The number of processor licenses is yet to be determined.

The American Academy of Family Physicians (AAFP), one of the largest medical organizations in the United States, is calling for changing the federal classification of cannabis to a drug with medical uses.

Get the PDF Version to Print and Distribute