ASA Pressures Calif. Governor to Stand Up for Patients' Rights

In response to the dramatic increase in federal raids on California's medical marijuana patients and caregivers, Americans for Safe Access this month organized a campaign to convince Governor Arnold Schwarzenegger to stand up for his state's most vulnerable citizens.

The campaign—which included more than 40,000 postcards to the Governor, as well as hundreds of phone calls and emails, all urging him to take action to defend patients' rights—included a meeting with a representative of the governor on October 5. Governor Schwarzenegger's chief advisor for health and transportation spent an hour with ASA Executive Director Steph Sherer and ASA California Director Don Duncan, discussing how medical marijuana patients and providers in California are being victimized in the state-federal conflict. The advisor assured them that the governor's office has received hundreds of cards from ASA supporters and is well aware of the issue. ASA's constituents have the governor's ear, she said, and the governor is listening.

Six days after the meeting, more than 300 medical marijuana patients and advocates gathered at the governor's Los Angeles office for a rally urging the governor to act.

People began gathering in front of the governor's office over an hour before the event. By the time the rally began, the crowd took up almost the entire block, spilling into the streets and chanting, "support patients' rights, stand up and fight," and "we're patients, not criminals!" Many held movie-marquee style signs with such slogans as “Coming Soon: The Gov. in End of DEA Days.”

The Los Angeles City Council was represented at the rally by Brian Perry, a staff member in Council Member Dennis Zine's office, who read a prepared statement, saying, "this year has seen a dramatic increase in federal law enforcement activity surrounding medical cannabis, including raids, confiscation of medicine and plants, and indictments." Council member Zine, a former Los Angeles police officer, has been leading the City Council in working on city regulations for the operation of medical marijuana dispensaries. The LA City Council has publicly condemned the recent federal raids and asked the DEA to not interfere as the regulatory process goes forward.

Orange County Supervisor Chris Norby also sent a statement of support, and other speakers included Sherer, Duncan and Michael Martin, the former medical marijuana edible maker who was recently raided by the DEA. The rally ended on a somber note, as the crowd went silent to hear medical marijuana patient Stephanie Landa, 60, say a few words by speakerphone from federal prison, where she is serving a 41-month sentence. The rally got extensive coverage from local LA media, which reaches 10 million people.

This year alone, the DEA and other federal agencies have conducted more than 44 raids of California patients and providers, more than double the number of the two previous years.

Meanwhile, Governor Schwarzenegger has allocated more than $1 million to fund a statewide ID card program, and the state has established sales tax rules for dispensaries. Since 1996, more than 30 cities and counties have adopted regulations for dispensaries.

On October 4th, ASA activists and medical marijuana patients gathered in protest at the Oakland Federal Building, as an activist turned himself in to federal authorities to face charges that he supplied edible medical cannabis products to other patients.

Surrounded by protestors carrying signs reading, "DEA: Keep your hands out of the medical marijuana cookie jar," Michael Martin, 33, spoke to the press before surrendering. Martin condemned the ongoing raids in California, with his wife, Elinor; their sons, 3-year-old Tyler and 5-month-old Lucas; and his mother by his side. 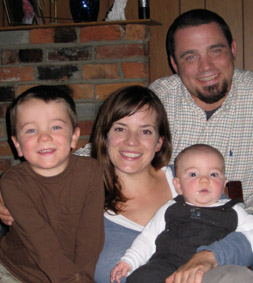 The Martin family in happier times

"I believe truly in my heart that I have done nothing wrong," Martin said outside the Oakland Federal Building. "We must put a stop to this travesty and, as a community, speak up and defend a patients' right to use safer alternatives of medication as they and their doctors see fit."

Federal prosecutors had issued an arrest warrant for Martin in connection with raids the previous week on Tainted, Inc., a maker of baked goods and other medical marijuana edibles. He was released later that day on a $300,000 bond; he faces charges that could result in more than 20 years in prison and $1 million in fines. Three others who worked at Tainted were charged along with Martin; all three are free on $200,000 bond.

Edible cannabis products provide an alternative to smoking cannabis and are preferred by many patients. Ordinances allowing for the sale of edibles by dispensaries have been adopted by many local officials, including the County of Los Angeles, the County of Alameda, and the City of Oakland, where the raids on Tainted, Inc. occurred. The medical cannabis products made by Tainted, Inc. carry prominent warning labels and are available only to qualified patients through dispensaries.

"Since I cannot smoke cannabis, I rely on edibles to control my pain and to allow me to sleep through the night," said Lenny Fisher, a 54-year-old cancer patient who has used Tainted's medical marijuana products.

The development of delivery methods that do not involve smoking was one of the recommendations of the White House commissioned 1999 Institute of Medicine Report on medical marijuana. While long-term studies of chronic marijuana users have shown that there is no associated risk of lung cancer or other diseases, many patients remain concerned about smoking cannabis or find oral ingestion to be easier or more effective.

This month, ASA staff members traveled to Dallas, Texas for the National Multiple Sclerosis Society's 2007 National Conference, the second time ASA has participated in the MS Society's annual gathering. The meeting was an opportunity to continue building a coalition of condition-based groups and expand ASA's MS Patients' Union.

ASA had an educational outreach exhibit at the conference where staff discussed safe access to marijuana with people living with MS, their family-members, caregivers, and advocates. The ASA staff attending—Executive Director Steph Sherer, Director of Government Affairs Caren Woodson and Field Coordinator Sonnet Seeborg Gabbard —were able to broaden their knowledge about both the National MS Society and the innovations in Multiple Sclerosis research and treatment.

Many people remembered ASA from last year's conference. Others were introduced to medical cannabis as treatment for symptoms associated with MS for the first time. Building on the momentum generated from an article published earlier this year by InsideMS, "Considering Cannabis," ASA has been educating MS Society chapter leaders, members, and staff on the therapeutic benefits of cannabis for treating several symptoms associated with MS, such as spasticity and other movement disorders, intractable nerve pain, and inflammation. To read more about cannabis and MS, visit: AmericansforSafeAccess.org/ms_booklet.

"There was a lot of interest about ways to ingest marijuana without smoking it, and people were generally surprised by how much progress we have made in 10 years," said Woodson. "We also heard some heartbreaking stories about loved ones with cancer and how much they would have liked another option for pain and wasting."

The broad-spectrum therapeutic nature of cannabis makes it a good choice for many people with a variety of conditions, such as arthritis, chronic pain, gastro-intestinal problems, and movement disorders such as Parkinson's.

With cancer more prevalent with aging, the well-established benefits of cannabis for coping with the devastating side-effects of chemotherapy are also of interest to older Americans.

Amicus Brief to State Supreme Court to Clarify Who Qualifies

How California courts define a qualified medical marijuana caregiver should be clearer once a new case is decided. The ASA legal team has filed a friend of the court brief in a pending California Supreme Court case, People v. Mentch, which will help decide who can legally provide medical marijuana to patients.

Because the California electorate and legislature have declared that marijuana is medicine, it is ASA's position that consistently cultivating marijuana for a qualified patient is enough to establish one's status as a primary caregiver. The Attorney General, on the other hand, has argued that one must do more, such as house, feed, or clothe the qualified patient.

Since the passage of the Compassionate Use Act over a decade ago, California courts have struggled to determine what a person must do to establish himself as the primary caregiver for a qualified patient. Just providing marijuana is not enough, several courts have said, to even argue caregiver status as a defense at trial. ASA's amicus brief seeks a definition of primary caregiver that is more faithful to the language of the Compassionate Use Act and the voters' intent.

Give Thanks! Tell Us How Medical Marijuana Has Helped You

This holiday season it is important to reflect on all that we are thankful for. We here at ASA are thankful for all of our members and supporters like you who have helped promote safe and legal access to medical cannabis. This month, we are calling on patients, medical professionals, researchers, patients' loved ones, and other supporters to share how medical cannabis has impacted your life.

Please send a short testimonial explaining how medical cannabis has affected you and your loved ones. Let us know if you would like us to share your story. You can send a letter, e-mail, or even a video of your story. Let us give thanks this season.