Victory for Patients' Right to Return of Marijuana

Appeals Court Says Police Must Give Back Property Despite Federal Law

Attorneys for the police claimed that they should not have to since federal law prohibits possession of marijuana, even for medical use. But a three-justice panel from the state's Fourth Appellate District unanimously rejected that claim, saying "it is not the job of the local police to enforce the federal drug laws."

"California law enforcement is now on notice that they cannot seize and keep the medicine of seriously ill patients," said ASA Chief Counsel Joe Elford, who represented Kha. "The court has ensured that patients have a way to get their cannabis back."

The ruling was more than two years in the making. After a marijuana possession charge against Kha was dismissed in August 2005 because he had a valid doctor's recommendation, an Orange County Superior Court judge ordered the return of his medicine. But the City of Garden Grove refused and appealed the order.

In analyzing reports from nearly 800 patient encounters with local or state police in 53 of California's 58 counties, ASA found that more than 90% resulted in medicine seizure by police, regardless of probable cause.

The court's ruling also affirms a 2005 policy change by the California Highway Patrol (CHP). CHP abandoned its policy of mandatory seizure of medical marijuana after a court challenge from ASA.

Colorado courts have been the scene of two momentous victories for patients in that state, thanks to the tireless work of attorney Brian Vicente. Both cases help clarify Colorado's medical marijuana law as it applies to caregivers. 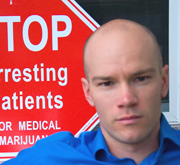 Brian Vicente, director of the Colorado Campaign for Safe Access

In the first case, a caregiver couple in Fort Collins was awarded the return of medical cannabis and cultivation equipment seized from their home in August 2006.

In June, a Larimer County judge dismissed all charges against James and Lisa Masters, citing an illegal search by police. Then on November 29, he ordered a full Return of Property, including the 39 cannabis plants the Masters were growing and about 8 ounces of dried medicine.

"The state medicinal marijuana law requires authorities to maintain the plants and not destroy them or damage them in any way," Vicente told the media after the ruling. "I'm fascinated to see if the police have been following the law."

Vicente - who is director of the Colorado Campaign for Safe Access, a joint project of Sensible Colorado and Americans for Safe Access - said he intends to pursue financial compensation for the Masters, since the refusal of police to return the plants in a timely manner has destroyed the plants' medicinal value.

The ruling in the Masters case comes little more than a week after another big win by Vicente.

On November 20, a state court overturned a Colorado Health Department policy that limited the number of patients for which a caregiver could provide cannabis. The department had capped the number at five, though the law approved by voters stated no limit.

The ruling came thanks to Damien LaGoy, who has AIDS and hepatitis C. He sued the state after his caregiver request was denied based on the five-patient restriction.

"I was in a very dangerous situation," LaGoy told the media at a news conference after the decision. "I was trying to get medical marijuana from some of the darkest spots in town, risking my life at times."

The court overturned the five-patient policy because it had been adopted in a closed meeting, a violation of the Colorado open meetings act.

"The health department just randomly selected five as the limit in a secret, clandestine meeting that was not open to patients or caregivers or doctors or the scientific community," said Vicente.

Advocates in Colorado hope the ruling will pave the way for the establishment of better community-based solutions to safe access, such as the collective dispensary model adopted throughout much of California.

The Masters may be the first to test that, as well. They opened a patient collective in Ft. Collins in October.

A 45-year-old disabled veteran is at the center of a California Supreme Court case that will decide whether California medical marijuana patients can be fired for using the medicine state law allows.

On November 6, ASA Chief Counsel Joe Elford appeared before the court on behalf of Gary Ross, a software engineer who was fired in September 2001 for failing an employer-mandated drug test - even though Ross had a valid doctor's recommendation for cannabis and only used the drug away from work.

Gary Ross, outside of court.

Elford, along with co-counsel Stewart Katz, argued that state law should protect Ross and other medical marijuana patients.

"Neither the People of California nor the state legislature intended to exclude medical marijuana patients from a productive workforce," said Elford. "California must continue its leadership role in protecting disabled workers."

Ross's physician had recommended he use cannabis for chronic back pain that resulted from injuries sustained during his military service. But his employer, RagingWire Telecommunications, refused to make an exception to its policy of terminating anyone testing positive for marijuana.

"I was fired not for poor performance but for an antiquated policy on medical marijuana," said Ross. "This practice undermines state law and the protections provided for patients."

Ross filed suit against RagingWire, alleging discrimination, but a Sacramento Superior Court and then the Third Appellate District Court rejected his argument. ASA then joined his case and appealed to the California Supreme Court.

The court received many 'friend of the court' briefs in support of Ross, including briefs from 10 national and state medical organizations and one signed by all of the legislative co-authors of California's Medical Marijuana Program Act.

"Mr. Ross is not only standing up for his own rights, but for the rights of every Californian to comply with Proposition 215 and not face discrimination at work," said Assemblyman Mark Leno (D-San Francisco), one of the co-authors of the MMPA.

A decision is expected by February of next year.

In this second episode of The Drew Carey Project, released on Reason.tv, Drew interviews ASA Executive Director Steph Sherer and takes a look at federal interference with medical cannabis dispensing in California.

In the video, Steph shares her story with Carey, who is currently the host of the TV game show The Price is Right, and talks about how her own experiences led to her founding of Americans for Safe Access. Drew also visits a Los Angeles dispensary and goes on to interview Steve Whitmore, spokesperson for the LA County Sheriff's Department, as well as Bill Leahy, Vietnam vet and medical marijuana patient.

The piece has garnered a significant amount of media attention. Many articles have compared Carey's activism to that of Carey's predecessor as host of The Price is Right, Bob Barker, who signed off every show with a public service announcement asking the audience to spay and neuter their pets.

The video is the second episode of The Drew Carey Project, a joint venture between Carey and Reason magazine. Its mission is to create "a series of video documentaries that take a hard look at the variety of threats to our liberties -- and celebrate what it really means to be free."

You can view Carey's report at www.AmericansForSafeAccess.org/DrewCarey.

Give Thanks! Send Holiday Greeting Cards
to Prisoners of the Medical Marijuana War

If you have not yet written to a medical marijuana prisoner, you can find tips on how to write a letter and information about these prisoners at: www.AmericansforSafeAccess.org/WritetoPrisoners.