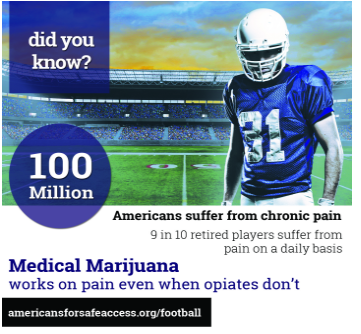 This week, the Buffalo Bills announced that left tackle Seantrel Henderson had been suspended for 10 games for violating the National Football League's substance abuse policy. Henderson has come out publicly to say that he has been using cannabis to treat his Crohn's disease. However, the league does not make any exceptions for medical cannabis use and Henderson was given his second suspension of the season for cannabis use. If he is caught violating the substance abuse rules one more time, he will be banned for life.

Stories about Henderson's suspension and the relief he has found through cannabis do not say if he is a registered patient in the New York or any other state medical cannabis program. It's somewhat unclear as to whether Henderson could get a recommendation in New York. While the state recognizes irritable bowel syndrome as a qualifying condition, Crohn's disease in a separate condition that affects the digestive system. If Henderson is a patient, New York's anti-discrimination provision should prevent punitive action taken against him unless he was found impaired by cannabis at the workplace. Sadly, job discrimination is not uncommon for medical cannabis patients to face.

In July 2015, the Colorado State Supreme Court ruled that due to federal law, it was permissible for employers to fire employees who are medical cannabis patients. In 2009, a Walmart in Michigan fired Joseph Casias who had been using medical cannabis to treat a brain tumor. Despite being recognized as an "Associate of the Year" in 2008, the company terminated Casias' employment simply because of his patient status.

Unfortunately, most medical cannabis states do not have explicit protections for patients. When lawmakers leave out these protections, it is usually because they do not want the business community to fight the bill our of concerns about maintaining their federal drug-free workplace credentials. While this concern is valid, there is a relatively easy way to accomplish discrimination protection without putting employees at risk for violation federal rules. States like Arizona and Delaware have included anti-discrimination language that prohibits employers from punishing registered medical cannabis patients unless it would cause the employer to lose federal funding.

Typically, these protections only make it into a medical cannabis law if they are included when the law is initially passed. Regrettably, Ohio has not only failed to include this protection in their law, but they went further by saying patients have no cause of action in court to challenge employment discrimination. Worse still, the Ohio law prohibits medical cannabis patients from receiving worker's compensation insurance coverage. While the Ohio provisions are currently an anomaly, patient advocates will need to vigilant to make sure it does not become a larger trend in other states.

Henderson's suspension from the NFL is absurd for any number of reasons. The sport is almost synonymous with concussions and medical cannabis can help heal brain injuries (although the league has made strides in this area with its concussion protocol). Nearly every NFL player battles chronic pain during their playing years and retirement, and cannabis can help potentially reduce or elimate a player's need for opioids. In Henderson's own case, he simply cannot take pharmaceutical pain relievers in his current condition, yet with cannabis, he was able to compete at the most elite level of his profession.

When mainstream organizations like the NFL take a hardline stance against cannabis, it's often with notions of "the message" that it sends. One has to wonder if they are concerned with the message they are sending to fans by suspending a person with a serious medical condition simply for using the one medication that is providing him with relief.