Legislation sponsored by Americans for Safe Access (ASA) entered the home stretch on Wednesday when the California Senate Health Committee approved AB 258, the Medical Cannabis Organ Transplant Act. The bill by Assembly Member Marc Levine (D-San Rafael) will protect medical cannabis patients from discrimination in the organ transplant process. AB 258 must now be approved by the full Senate and signed by the Governor. A final vote is expected next week.

ASA member Norman Smith lawfully used medical cannabis as part of his treatment for liver cancer. He was removed from the wait list by Cedars-Sinai Medical Center in Los Angeles after testing positive for medical cannabis use in 2011. Program policies required that he test negative for cannabis for six months before requesting a new place on the list. Sadly, Mr. Smith died before he could be placed back on the list, a tragic and avoidable loss of life.

Unfortunately, Mr. Smith is not alone. Toni Trujillo was denied a life-saving kidney transplant at Cedars-Sinai the following year based on her medical cannabis use, which the transplant center called “substance abuse.” Yami Bolanos, 59, an eighteen-year liver transplant survivor, was warned that she would be ineligible for an anticipated second transplant by a doctor at UCLA – despite the fact that her doctor recommended medical cannabis use. Richard Hawthorne, another patient in need of a liver, was denied a transplant by Stanford Medical School this year, despite a friend offering to be a donor.

ASA has been working to introduce and adopt AB 258 for more than two years. Yesterday’s vote put the campaign within eyeshot of victory, but there is still important work to do. Hundreds of medical cannabis patients and advocates will be visiting every member of the state legislature to talk about AB 258 and other bills as part of the annual California Citizen Lobby Day on Monday. Participants will meet on Sunday and Monday for special legislative briefings and lobbyist trainings, before going en masse to the Capitol on Monday afternoon. The timing is significant. The Senate may vote on AB 258 as soon as Thursday.

Participants in Monday’s lobby day will also launch a postcard campaign asking Governor Brown to sign the bill. The postcards feature pictures of living and deceased organ transplant patients who use medical cannabis and a simple message: “Governor Brown, Everyone deserves a chance. Sign the Medical Cannabis Organ Transplant Act.” ASA hopes to send 500 postcards to the Governor’s office next week. While the Governor is generally supportive of medical cannabis, ASA does not want to take any chances. Former Governor Schwarzenegger vetoed an ASA-sponsored bill to end employment discrimination against legal patients in 2008. 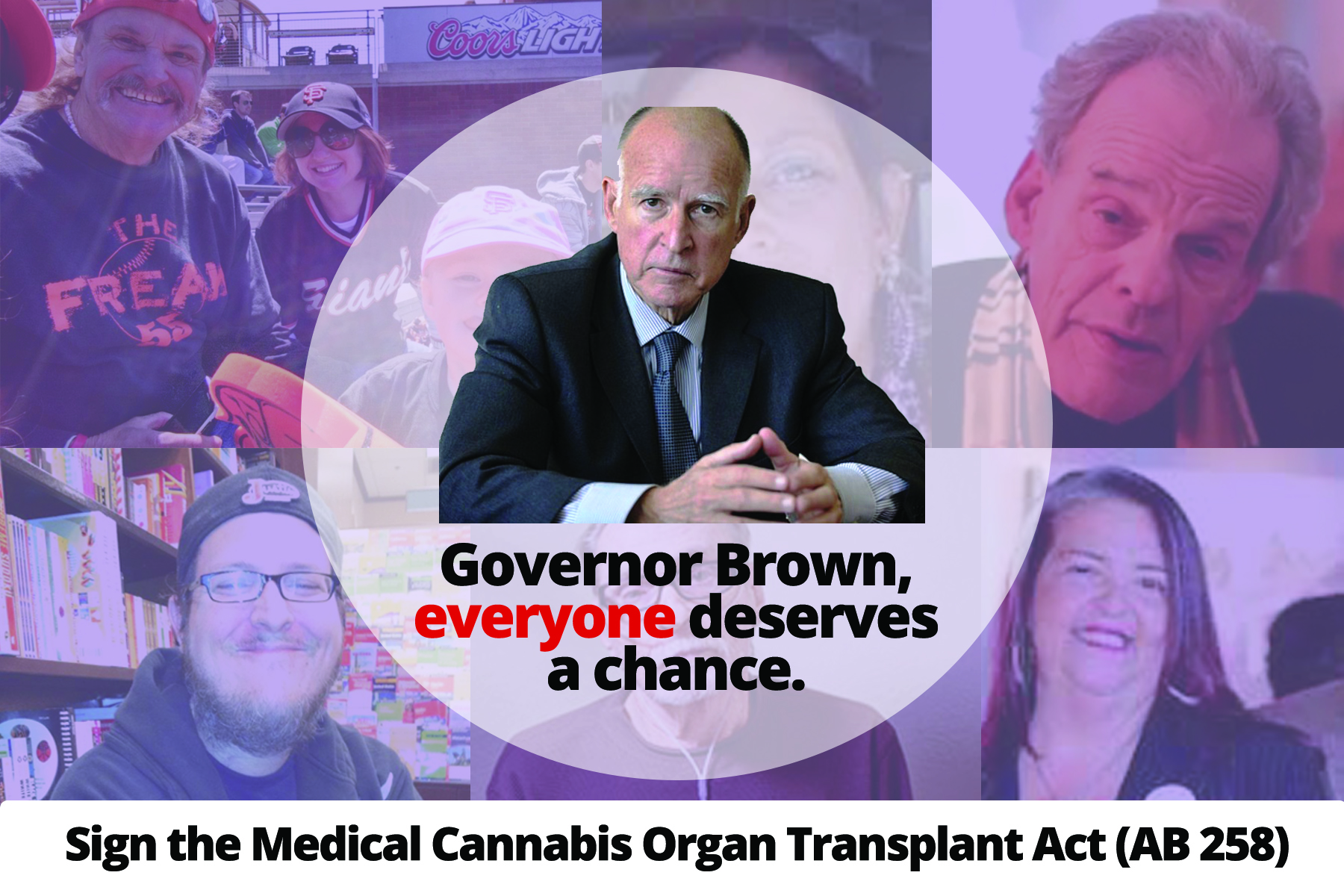 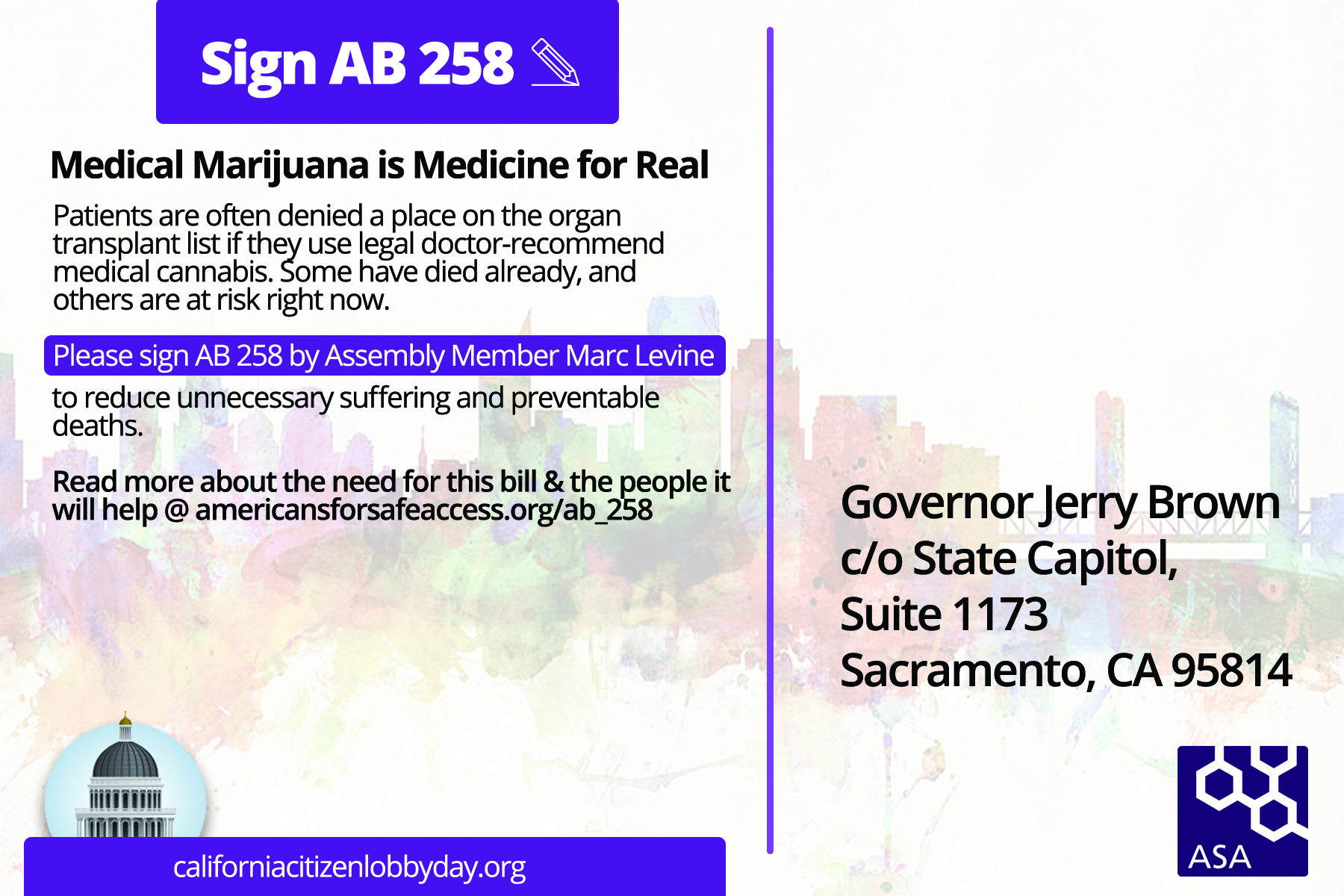 You can still participate in the effort to pass AB 28. Plan to be in Sacramento on Monday for the lobby day and postcard campaign kickoff. You can also sign a petition supporting AB 258 right now.