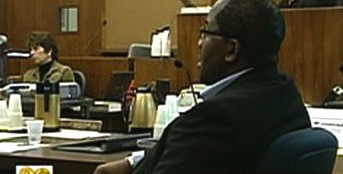 Tuesday, October 29 -- Day 3 of Jovan Jackson's third state medical cannabis trial in San Diego, California, Deputy District Attorney Chris Lindberg, the prosecutor through the last two trials, continued his questioning of a witness for the prosecution, ex-IRS Agent Rudolph Chesnik II, now a financial investigator contracted by the DEA.  Again, as yesterday, we saw up on a big screen the limited liability papers, bank statements and sales sheets for Jackson's collective, Answerdam, but today we also heard testimony by Chesnik concerning his attempts to reconcile sales with deposits and calculate total revenues based on sales from a handful of days.

In cross examination of Chesnik -- who we learned is paid out of The Department of Justice Asset Forfeiture Fund -- Lance Rogers showed that the investigation did not provide a complete picture of Jackson’s financial situation, since Chesnik was not given key bank information or cost and expense information.  Chesnik testified that IRS financial investigations generally have the benefit of speaking with the target entity’s record keeper for clarification on how the entity operates. However, since medical cannabis is illegal under federal law - and all related financial operations are considered money laundering - Chesnik was not allowed to talk to the record keeper at Answerdam to get the missing information, however exculpatory. In the end, the defense got the the seasoned financial investigator to admit what we all know: profit cannot be determined from revenue without knowing the cost of goods and operating expenses.

Though the prosecution has not yet rested - having two more witnesses arriving from out of state tomorrow -- Lance Rogers graciously agreed to split his case and called two of Jackson’s witnesses to fill the gap.

First up for the defense was Donald Clark, MD, the doctor who recommended Jackson try cannabis to treat his medical condition.  The court heard from Dr. Clark about how he evaluates patients who come into his office for medical cannabis recommendations: the time it takes, what he charges and the availability of patient medical records, prescriptions, evidence of body trauma and patient oral accounts and demonstrations.   In his cross examination, the prosecutor tried to discredit the doctor by pointing out the cost versus short length of the doctor visits and lack of cannabis dosage information provided to patients. But follow-up questioning from the defense showed that Dr. Clark’s clinic is comparable other pain clinics in terms of cost and length of visit. The prosecutor badgered Dr. Clark about the difficulty of identifying if patients are lying about their pain, but pain diagnosis is always based largely on what a patient reports, so his questioning fell flat.

Next on the stand was Kathleen, an Answerdam patient who suffers from celiac disease, a gastrointestinal disorder she uses medical cannabis to manage and keep weight on. Kathleen was a member from the collective's opening in 2007 through 2009 and testified to the care the collective used in verifying members.  She told the jury how she initially provided her doctor's recommendation at Answerdam but was turned away when it was found by Answerdam staff to be more than a year old.  When she returned with a valid, updated recommendation from her doctor, she then had to sign a form establishing her membership in the collective and, at another visit, a primary caregiver form.

Kathleen also testified as to what it was like to walk in on the first raid on Answerdam in full progress -- officers with guns drawn and police in SWAT gear. She explained how sad it was to her, since she had always felt so safe at Answerdam with their one-on-one service from professional staff. Her heartfelt story gave the jury insight on how scary it has been to be a patient during San Diego District Attorney Bonnie Dumanis’ reign of terror on medical cannabis patients.

Lindberg’s cross examination focused on the primary caregiver form and whether Jovan provided care to her in the form of housing or safety. She answered that not even her primary care doctor does that for her.  Lindberg also wanted to know if she paid in cash and why that was. She reminded him of the SWAT style riot gear and guns she has seen and said that, as a patient, she feared for her safety if she left a financial  record for the police.

Wednesday, October 30 -- Day 4 of Jovan Jackson's state trial was a half day because Judge Hanoian had a training to attend.
The morning consisted of Prosecutor Chris Linderg’s last witnesses: yet another DEA Agent, Sean Turpie, and a recall of San Diego Police Detective, Mark Carlson. Nothing of interest was provided by them, only testimony about where certain documents were found in Jackson’s bedroom when his home was raided in August, 2008.

The defense’s case resumed with Bob Riedel, directing member of the Mother Earth Alternative Healing Collective (MEAHC), taking the stand to explain how a typical medical cannabis collective operates. Bob walked the jury through the financial expenses involved in growing cannabis using a controlled indoor environment, how grower members of MEAHC were compensated, the overhead of running a collective, and the fact that risk associated with law enforcement and lack of zoning drives up the cost of medical cannabis.  Riedel's detailed testimony on cannabis clones, high-intensity lights and special fertilizers had the judge and jury riveted, more so than with any other evidence since the trial began.

In his cross examination of Riedel, Lindberg did his best to discredit him by bringing up his advocacy work on behalf of medical cannabis patients, a tactic we often see used by DA Dumanis’ Office. Dumanis and her underlings insist that patients who help patients are somehow opportunists and inherently unlawful.  This sort of bias is why we advocate in the courts and why we tell Dumanis with our actions that she alone has created this fierce movement against her.

Next up for the defense was John, a glaucoma sufferer and former patient member of Answerdam, whose testimony was extremely brave and carried a lot of weight. He spoke of his experience with Dr. Clark, testifying how he took his blood pressure, listened to his heart, reviewed his diagnosis records and helped him with decisions about how and when to use medical cannabis for the health of his eyes.  John had positive things to say about his experiences at Answerdam and confirmed that he was indeed a member.

In Lindberg’s cross, he asked John if he knew being a member of Answerdam meant he was helping Jovan Jackson get rich or if he thought he was helping the collective. John’s reply rang through the courtroom when he said he hoped Jovan was getting a salary and that the collective would remain sound as well. The prosecutor was also again preoccupied with the primary caregiver form john had signed by John, apparently forgetting that the Jackson case hinges on whether Jovan was making a profit, not what forms were used.

Other very interesting testimony came from Certified Public Accountant Mario Ceretto of Collective Accounting Solutions.  Ceretto has been helping medical cannabis collectives with their financials and taxes for several years. As he explained in direct examination by the defense, collectives are not allowed to have bank accounts under federal law, so, as their accountant, he must collect funds from his clients and pay taxes on their behalf.  Ceretto also testified it is completely lawful for non-profits to have excess revenue and hold that excess for programs, emergencies and improvements to the collective.  He explained that it's only if the revenue is later dispersed to shareholders or principals that excess revenue is considered profit. The CPA also explained that federal 501(c)3 tax designations are not required for non-profits unless they want an exemption from paying taxes, outlining that non-profits are not solely defined by their IRS status.

Lindberg, in his cross examination, showed Ceretto a picture of the CPA with a banner which said NUG, the name of a cannabis magazine, and asked him if his CPA business would benefit if the cannabis industry grew. That left me wondering this: if Ceretto’s business is suspect because it flourishes to the extent he helps cannabis collectives operate lawfully and pay taxes, what does that say about the prosecution's expert financial witness, Rudolph Chesnik, whose salary is paid from  assets the Department of Justice seizes in arrests of medical cannabis patients?

Background: Jovan Jackson is a Navy veteran and was a directing member of Answerdam, a San Diego medical cannabis collective raided in 2008 and 2009, resulting in two different state criminal trials. The first trial resulted in an acquittal, but in the second trial Jackson was denied a defense under California's medical cannabis laws and was convicted. That conviction was overturned by a successful appeal (People v. Jackson) filed by Americans for Safe Access and Lance Rogers, Jovan’s attorney through both trials. The precedent-setting ruling by the appeals court found that Jackson was entitled to a defense under California's Medical Marijuana Program Act because collective members need not participate in cultivation or other activities for the collective to operate legally, sending Jackson's second case back for retrial. This case is being argued before Judge Louis R. Hanoian because the original trial judge demonstrated bias toward the prosecution.

Please come to court and support Jovan Jackson as he fights for the rights of all collectives to exist and serve patients under California law.