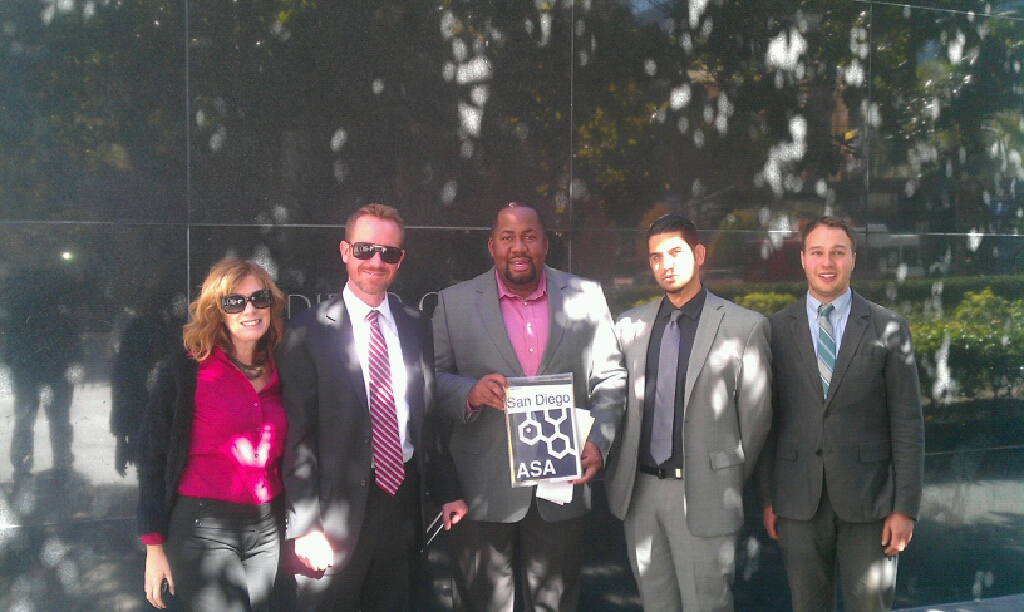 Friday, November 1 -- Jovan Jackson supporters were treated to some high drama in the courtroom today as the prosecutor, San Diego Deputy District Attorney Chris Lindberg, called Robert Asfari, a former employee of a financial firm named The Renaldi Group (TRG) to the stand.  Lindberg has been using evidence of a sum of money paid to TRG by Jackson's Answerdam Collective as indication Jackson was making profit.  By way of refuting this, Jackson had testified yesterday to being approached by Asfari in 2008 with an offer to use TRG’s business management services to help Answerdam  and that the sum was for those services, not an investment in TRG as the Lindberg implied.

When Asfari got on the stand, he told a different story than Jackson’s.  Asfari minimized his own role at The Renaldi Group claiming Jackson was an investor and not simply a member of an organization seeking services for its business model. Further Asfari denied any knowledge of forming a Limited Liability Company (LLC), Limited Liability Partnership (LLP) or a Trust on behalf of Answerdam.   What Lindberg and Asfari didn’t know was that a private investigator had been quietly gathering information corroborating Jackson’s accounting of the TRG/Answerdam relationship; information that when presented to the jury became Lance Roger’s finest Perry Mason moment so far.

In the defense’s cross of the hapless witness, Asfari impeached himself again and again, first by failing to disclose he was in fact a Senior Vice President and Managing Partner of TRG and not the sales associate he claimed to be, then Asfari was also shown a document with his signature as well as Jackson’s, outlining the very business plan Jovan had testified to and Asfari had denied.

The document, called an Engagement Letter promised Answerdam a three year roll-out plan to move the collective forward in better serving its members with expanded health programs and enhanced services. Phase I of the plan offered branding, marketing, help with financial and corporate structure, trademarking and legal research and development. The letter stated TRG would perform these services and both parties had signed it.  The letter completely gutted the idea that Jackson has sought to invest in TRG and no evidence was presented otherwise.

We would have loved to hear from the private investigator who uncovered the exonerating documents but, though he was called the stand, the prosecution continually objected to the defense's questions to the witness, and the judge sustained every one.  The defense could not elicit testimony other than that TRG had a Facebook page and the P.I. had checked it that morning before court.

The evidentiary portion of the trial completed at 11:00AM and after jury instructions were read to the jury, Lindberg began his closing arguments.  We were all subjected to yet another slide show presentation by the prosecution and more of the same claims that Jackson was hiding behind California’s medical marijuana laws to make lots of money and put it in his pocket.  It is interesting to me how jumping hurdles to comply with the serpentine roadmap of medical marijuana laws becomes, in the San Diego District Attorney’s Office, hiding behind them. The Compassionate Use Act (CUA) and the Medical Marijuana Program Act (MMPA) are specifically designed to protect people like Jovan Jackson, but DA Bonnie Dumanis consistently finds those who attempt to comply are somehow opportunists for trying.

In a laughable assertion, Lindberg tired to convince the jury that Answerdam was responsible for policing all their vendors to be sure they are not making profits either. He went on to say that birthday giveaways of medical cannabis to patient members are illegal since other collective members must bear the brunt, forgetting that everybody has a birthday and eventually gets a giveaway.

The prosecutor also made much about the fact that there were few financial records found at Answerdam but did not disclose that records were missing because police had confiscated most of them.  Lindberg ended with the silly idea that medical cannabis collectives are not entitled to use their revenues to operate. He maintained that medicine must be sold at no more than the exact cost of producing it; one most know what that cultivator’s production cost is and medicine must be sold at that price all the way down the line with no-overhead added into the price of the product.   Under this whacky model, medical cannabis can only be sold out of a paper box on the side of the road.

In the defense’s closing, Lance Roger took us through the elements of the MMPA defense and provided a mathematical formula for calculating Answerdam’s revenue, using the prosecution’s own figures to do so.

For those of you who like math, here’s what we heard:  Rudolph Chesnik II, the DEA’s financial investigator, calculated from a handful of sales tally sheets found at Answerdam during the September 2009 raid that the collective was selling 100 grams of medical cannabis a day at about 15.59 per gram.  Most law enforcement officers claim that one pound of cannabis is worth about $5,000.  There are 453.59 grams in a pound of cannabis: $5000 /453.59gm = $11.02 per gram.  $11.02 is what the medical cannabis product cost Answerdam to purchase.  As the DEA investigator testified, Answerdam was selling at $15.59 per gram so: $15.59 - $11.02, meant Answerdam was making $4.57 per gram. If Answerdam sold 100 grams daily, as the DEA investigator extrapolated from the tally sheets, Answerdam’s revenue would be $457.00 extra dollars a day.  Next, we factor in operating expenses such salaries for four employees. Four salaries at 15 dollars per hour for an eight hour shift is $480 per employee. You can now see that just modest salaries have exhausted the revenue stream, and we never got to factor in other very typical overhead expenses such as rent, legal fees, electricity or office supplies,

The defense’s closing argument was followed by a short rebuttal from the prosecutor, who again insisted that medical cannabis non-profits are not allowed to operate like all other non-profit businesses on the planet. But by that time, we were all half way out the door to Happy Hour.

Jovan Jackson’s legal team, Lance Rogers, Rezwan Khan, Logan Fairfax and Kyle Bird -- none of whom are getting paid –- have done a tremendous job proving that he operated within the MMPA.  It has been a pleasure to get to know these men and watch them work so hard for our hero, Jovan Jackson.

The jury will meet again at the courthouse to begin deliberations on Monday, November 4, 2013 at 9:00AM.  All efforts will be made to inform the public as soon as the verdict is available.