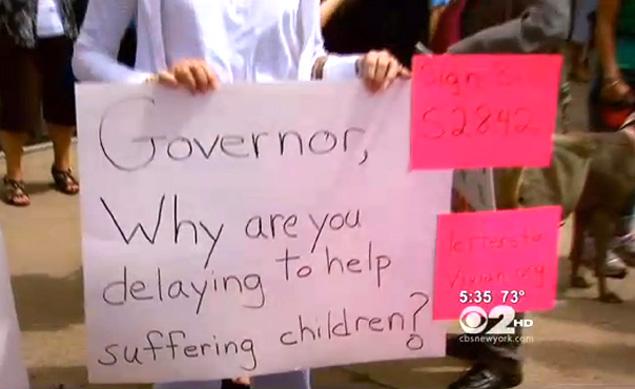 Few things are more difficult than watching your child suffer from a devastating medical condition, and few conditions leave parents feeling more helpless than seizure disorders. The convulsions are horrifyingly dangerous and unpredictable, and so are most of the drugs used to treat them. That’s caused many parents to seek out medical cannabis as an alternative.

Cannabis and cannabinoid medicines may control seizures in ways other medications cannot, and without many of the serious side effects of drugs such as phenobarbitol, Depakote or Benzodiazepine. Oral cannabis preparations are preferred for ease of administration, and new CBD-rich extracts have become sought after because of remarkable results achieved in some children with extreme seizure disorders such as Dravet syndrome, a condition that can produce hundreds of seizures a week and often results in cognitive impairment or death.

Families have migrated to states such as Colorado for consistent, legal access to cannabis medicines, while other parents in states that do not allow medical cannabis or its use with children have pushed their elected representatives to make the medication available locally. Lobbying by one family convinced New Jersey Gov. Chris Christie to sign a bill in September making edible cannabis products available for kids, and another family in Toronto has started an online petition calling on Health Canada to allow CBD extracts into the country and to sponsor medical trials to study CBD’s benefits and the appropriate dosages.

The push has even expanded to the conservative bastion of Utah, where about 35 families are on the waiting list for CBD medicine produced by the Realm of Caring Foundation in neighboring Colorado. They’ve gained the support of doctors at the University of Utah, including the chief of pediatric neurology, Dr. Francis Filloux, who joined two other physicians in writing a letter to Utah’s Controlled Substances Advisory Committee, saying “CBD- based oils (referred to here in Utah as Alepsia) should be available as soon as possible to Utah children with severe epilepsy. The substance is not psychoactíve or hallucinogenic, it contains less THC than do other materials that can be legally purchased in Utah, and it has absolutely no abuse potential.”

Late last month the idea got a positive reception at two Utah legislative committee hearings, with medical professionals who serve in both houses expressing support for helping children with seizure disorders, and  Rep. Gage Froerer saying he is committed to carry a narrowly crafted bill. Saly, no one has a clue how to make just a CBD extract legally available. Importing it from Colorado, while seemingly simple, would both violate current Colorado law and run afoul of the latest Department of Justice enforcement guidelines that specify interstate traffic remains a priority for federal prosecution.

Asking families with suffering children to wait a few years isn’t a good solution either, but GW Pharmaceuticals has received FDA approval to test a highly purified CBD extract named Epidiolex on a limited number of US children with Dravet syndrome and other seizure disorders. So far, seven US pediatric epilepsy specialists have been approved to treat 125 children with Dravet syndrome, Lennox-Gastaut syndrome, and other pediatric epilepsy syndromes. GW also makes Sativex, a THC-CBD extract of cannabis which has been approved for treating multiple sclerosis in Canada, Australia, and most of Europe, but it still isn't available in the US. Even if Epidiolex shows the results the Colorado extract has, the federal government rejected the latest petition to change the classification of cannabis to recognize its effectiveness as medicine because the plant has not undergone Phase III clinical trials involving many hundreds of patients over many years. The rarity of pediatric seizure disorders such as Dravet syndrome make such trials impossible, so even a 100% success rate could still be rejected by the FDA is insufficient evidence to approve the drug for treatment. So it could be a long wait in vain.

The foot-draggers in Washington, D.C. fall back on the notion that those who suffer should wait on FDA approval of cannabis. But the government’s insistence that an ancient herbal medicine undergo the same evaluation as new synthetic compounds is what logicians call a category error –confusing the attributes of two complete different things. Large-scale clinical trials seek to ensure that new substances never before ingested by humans will have the hoped-for therapeutic effects and not cause harm or death. The 5,000 years of documented human use of cannabis as a medicine has already answered that. Cannabis is not the best medicine for every condition, but it is one of the safest substances known (less toxic than potatoes and other foods we commonly eat), and for some conditions it can work when nothing else does. That can mean relief for a lot of suffering people.

Epilepsy affects more than 7 million Americans, and more than 1.5 million of them do not respond to conventional treatments. Cannabis and cannabinoid medicines provide a viable alternative. The immediate solution for folks in Utah is the one voters in Colorado created: eliminate the legal barriers to producing, distributing and using cannabis medicines.

The solution for the nation is the same: Change the law.