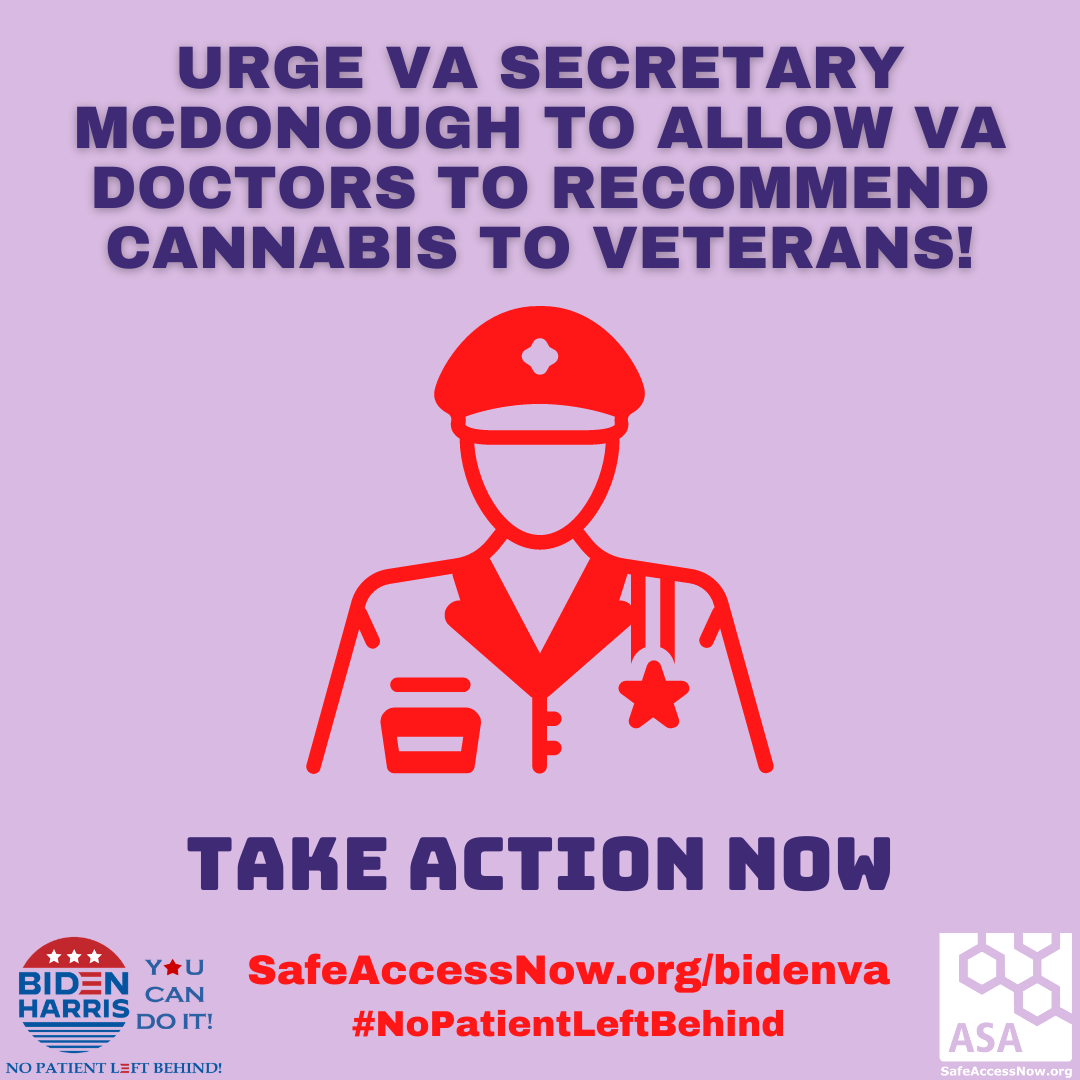 The roughly 20 million veterans living in the U.S. experience health challenges ranging from chronic pain, traumatic brain injuries and post-traumatic stress disorder at a higher rate than the general population. According to the VA, nearly 20 percent of Iraq and Afghanistan veterans experience PTSD or depression following their service, with 60 percent of service members returning from duty in the Middle East with some form of chronic pain. Treatment offered for these conditions by the VA typically includes use of opioid-based products, which have well-documented addictive and long-lasting side effects, and are killing veterans at a rate twice that of the civilian population due to accidental overdose.

Meanwhile, ongoing research continues to demonstrate the effectiveness of cannabis as a medicine in treating PTSD, neurological issues and chronic pain, and in reducing opioid dependency. Veterans groups like AMVETS have been vocal about their support for increased research in the past “AMVETS supports cannabis research as it relates to PTSD and sees the benefits of this plant. Veterans should have access to resources and options that can save their lives. No one and nothing should be left behind,” said Cherissa Jackson, chief medical executive, AMVETS. Two 2020 studies, one conducted by Wayne State University in Michigan and the other by Brazil’s Federal University of Parana, demonstrate that cannabis can reduce anxiety in adults overwhelmed by trauma as well as reducing and eliminating traumatic memories. It was recently announced that the Battle Brothers Foundation in partnership with NiaMedic won approval for a study on the use of medical cannabis to treat PTSD in veterans.

Beyond advancements in research, there is also wide support among veterans for federally-sanctioned access to cannabis and education of VA doctors on cannabis as a medicine. Results of a 2017 American Legion study revealed that over 90 percent of veterans support medical cannabis research, with 80 percent surveyed also supporting allowing VA doctors to prescribe cannabis to veterans. In this same survey, 22 percent of veterans said that they were already using medical cannabis to treat chronic pain, PTSD, spasticity, agitation and to improve sleep quality.

In addition to VA doctor consultations on cannabis from cannabis-educated physicians, the Veterans Administration must also tackle the issue of affordability. The affordability of cannabis continues to be one of the greatest barriers to access reported by patients across the country. Veterans who use medical cannabis to treat their condition must also pay for this medication out-of-pocket with no financial support or subsidy from the VA. The cost of medicine can vary wildly depending on the state and city in which the patient lives, with monthly costs ranging from hundreds to thousands of dollars.

With promising research advancing, abundant legal state access available, and 1 in 5 military veterans making the choice to use state-authorized medical cannabis for treatment, it is time for the VA to reexamine its policies on cannabis. While Congress has demonstrated leadership through important legislation like the VA Medicinal Cannabis Research Act and the Veterans Equal Access Act, there is much the new administration can do to take action to help veterans with medical cannabis.

The administration and the VA can repeal §3(b) of the Veterans Health Administration Directive 1315, so that cannabis is no longer defined as a drug of abuse. Doing so will enable VA physicians to consult with veterans on medical cannabis, and initiate an important process of integrating medical cannabis education and training into the curriculum of VA doctors. “Without a doubt, cannabis is my lifesaver! I strongly recommend you support Americans for Safe Access and urge VA Secretary McDonough to allow VA doctors to recommend cannabis to those veterans who are suffering,” said Eryck Stamper, founder, Veterans Initiative 22. Americans for Safe Access stands with veterans in strongly urging the Biden administration to take this important step, and you can too!

Stay tuned for the next blog in this series, which will highlight cannabis patient issues related to federally subsidised housing, and discuss what the Department of Housing and Urban Development can do to offer and maintain housing for cannabis patients!

See what other actions you can take to protect medical cannabis patients and expand access!