Tonight at 7pm Eastern/Pacific and 8pm Central/Mountain, CNN will air a report devoted to the pending federal trial 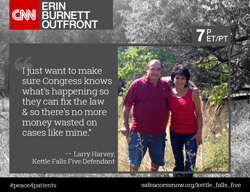 Their small cooperative garden on the rural family farm contained only 45 plants, but federal prosecutors are alleging that the sum total of all the plants they are presumed to have cultivated in the years since registering as patients should be used in making them subject to long mandatory sentences. Cultivating fewer than 100 plants does not carry mandatory federal prison time.

The CNN report on the Kettle Falls 5 is airing tonight, Thursday, Sept. 4, on Erin Burnett’s Outfront program at 7pm Eastern/Pacific and 8pm Central/Mountain, so check your local listings.

The quarter-page USA Today ad notes that "9 in 10 retired players suffer from pain on a daily basis," and "medical marijuana works on pain even when opiates don't." The ad runs for 30 days and will be followed by digital online ads in the markets for the Atlanta Falcons, Chicago Bears, Dallas Cowboys, Denver Broncos, Green Bay Packers, Miami Dolphins, New England Patriots, New York Giants, and Philadelphia Eagles. 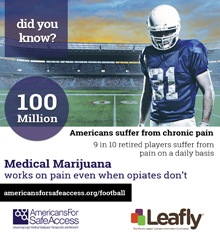 o treat head injuries if medical experts agree it would be effective. The NFL's collective bargaining agreement still prohibits the "illegal use" of marijuana, despite medical marijuana laws in 23 states and the District of Columbia, and the league has continued to suspend players for its use.

In January, HBO's "Real Sports with Bryant Gumbel" reported that an estimated 50-60 percent of NFL players regularly use marijuana, many for pain management. Six months before Commissioner Goodell made his announcement, the respected peer-reviewed Oxford University Journal Cerebral Cortex published the latest study showing the neuroprotective benefits of canabis, which "can help heal the brain after a traumatic injury, such as a concussion." Other studies have made the same finding.

In August, KannaLife Sciences signed a license agreement with the National Institutes of Health to allow the company to test cannabis-derived medicines to treat chronic traumatic encephalopathy (CTE), a degenerative disease that affects people such as NFL athletes who have endured repeated head trauma. KannaLife Sciences isn't expected to begin clinical trials until 2015, however, with an approved drug still years away, and the NFL is currently being pressured to find effective treatments for CTE.

More than 4,000 former NFL players have joined a class-action lawsuit against the league for concealing the effects of concussions. An initial $765 million settlement was rejected by a federal judge as insufficient compensation. A new agreement with uncapped monetary awards received preliminary approval last month.

At the beginning of August, ASA’s fourth citizen lobby day in California brought approximately 150 patients and other stakeholders to Sacramento, where they had more than fifty scheduled visits with legislative offices, in addition to impromptu visits initiated by attendees. Participants asked lawmakers to support ASA’s proposed Medical Marijuana Organ Transplant Act and the original version of SB 1193 (Evans), the return of property bill. They also expressed a variety of opinions on the controversial state regulatory bill SB 1262 (Correa/Ammiano).

Much of the lobby day talks concerned SB 1262, with many participants providing helpful input and suggestions. ASA successfully leveraged support for SB 1262 to institute important changes for patients and other stakeholders, including removing the bill’s restrictions on the type and number of licenses for which applicants could apply. The bill stalled in the Assembly Appropriations Committee and failed to advance to a floor vote. Both co-authors of the regulatory effort are serving their final term in the state legislature this year, so it will be back to the drawing board in 2015. This is the third time the legislature has tried and failed to adopt regulations for the California's seventeen year-old medical cannabis industry.

The other bill that received citizen lobbying attention was SB 1193, which would have changed how law enforcement deals with property seized from medical cannabis patients and other qualified individuals. SB 1193 was supposed to be a win-win compromise for patients and law enforcement. The original bill would have eased the rules for handling cannabis seized as evidence but required law enforcement to return the property or pay the owner reasonable compensation if it was shown to be possessed legally.

Following the lobby day, the return of property and compensation provisions were removed, so ASA mobilized opposition. In less than a week, patients and other concerned citizens deluged state legislators with more than 1,000 emails and phone calls, ensuring this bad legislation was killed.

At the beginning of August, Washington, D.C. Mayor Vincent Gray signed a measure to put physicians in charge of determining which of their patients may use medical cannabi. The Medical Marijuana Expansion Emergency Amendment Act of 2014, which was unanimously approved by the D.C. Council on July 14, removes the District’s restrictive list of qualifying conditions and increases the plant limit at licensed cultivation centers from 95 to 500 plants.

The expansion of the medical cannabis program was a significant victory for patients. D.C. residents with conditions such as post traumatic stress, lupus, dystonia, spinal cord disease, chronic pain, and other serious medical conditions will now be able to qualify for legal protections and safe access to medical cannabis. The District, along with New Jersey, was one of the first jurisdictions to create highly restrictive legislation that excluded patients who suffer from many serious medical conditions for which cannabis has been shown to be an effective treatment. D.C. now joins Massachusetts and California as the only current medical marijuana jurisdictions that entrust physicians with evaluating which patients and conditions may respond to medical cannabis. Currently, Pennsylvania's SB1182 and Florida's Amendment 2 both contain similar language making the decision to use medical cannabis one between physicians and their patients, as it is with other medications.

The Safe Access D.C. chapter was instrumental in organizing patient meetings and testifying at hearings over the past four years, helping to bring about these changes in the law, even tweeting the Department of Health a Valentine's Day Card pointing out that D.C. had the most restrictive program in the country. Many of the District's cultivators and dispensary operators also fought tirelessly to improve the program.

The bill was passed as "emergency legislation" due to the quirks in D.C. law that require its permanent legislation be approved by Congress. Most bills must undergo a 30 or 60-day Congressional review period; however, the District may enact short-term legislation that goes into effect immediately upon the signature of the mayor, but only stays in effect for 90 days. This means that B20-0876 went into effect on July 31, but for the law to remain in effect the D.C. Council must pass permanent legislation when it returns from recess in mid-September. That is likely, since B20-0766 was cosponsored unanimously by the Council.

The new bill also now contains the expansion of the plant limit, which was previously introduced in separate legislation by Councilmember David Grosso. A procedural rule kept the Council from voting on Alexander's bill prior to the July 15 recess, so Councilmember Tommy Wells introduced the emergency legislation, which the Council swiftly approved unanimously.

The District Department of Health (DOH) has made a number of other improvements to the Medical Marijuana Program (MMP) this year. DOH has streamlined the patient application process, made it less difficult for physicians to obtain recommendation forms, begun to hold semi-regular public meetings of the program's Advisory Committee, and improved the turnaround time for patients to obtain their registration identification cards.

The improvements to the District's law and the administration of the MMP will be reflected in a revision to the District's grade in ASA's report, Medical Marijuana Access in the U.S., once permanent legislation is enacted.

Connecticut's first medical marijuana dispensaries opened last month, even though no licensed cannabis is yet available to patients.

Prime Wellness of Connecticut in South Windsor was the first to open its doors so people could see its facilities and meet its staff. Bluepoint Wellness of Connecticut opened a couple weeks later so patients in the New Haven area could familiarize themselves with its services. Both dispensaries expect to begin distributing medical cannabis to qualified patients this month.

Six dispensaries have been approved by the state Department of Consumer Protection. To obtain medicine from them, patients must be registered with the state. To qualify, Connecticut residents at least 18 years old must be certified by a medical professional as suffering from at least one of 11 medical conditions, such as cancer, HIV, or multiple sclerosis. Connecticut has been accepting patient registrations for the past two years while the regulatory system for distributing medical cannabis was being established.

Other dispensaries expected to open soon include Compassionate Care Center of Connecticut in Bethel, which will have a grand opening celebration Sept. 12 and open for business Sept. 16, when they expect to have medical cannabis available for patients.

Get a front row seat for exciting conversations about the future of medical cannabis in the United States and play an active role in shaping public policy at ASA’s third annual national conference March 27-31, 2015, in Washington, DC. The National Medical Cannabis Unity Conference 2015 will be our largest and most important conference yet. Hundreds of patients, advocates, scientists, and industry leaders will meet at the Lowes Madison Hotel in the heart of downtown for three days of networking, education, and action.

ASA will have a scholarship program for some participants again this year, but everyone can save by planning ahead. Early-bird registration is open right now, and we are offering special discounts for ASA members. If you still haven’t joined ASA, you can save $50 on your conference fees by joining when you register.

You can also save money by booking your room at the Lowes Madison Hotel right now. It is always more convenient (and fun) to stay at the conference hotel. Plus it helps ASA pay the substantial up-front cost of a national event like this. Be sure to tell them you’re with ASA’s National Medical Cannabis Unity Conference 2015 when you make your reservation. This is also a good time to book airline tickets. You can get round-trip tickets from the West Coast for less than $400 right now.

To download a PDF of this newsletter to print and distribute, go to http://AmericansForSafeAccess.org/sept2014_news