The Marijuana Opportunity Reinvestment and Expungement Act (MORE Act or H.R. 3617) took a step closer to passing the House again when it was approved by the House Judiciary Committee on a vote of 26 to 15.

A previous version of the MORE Act passed the House of Representatives in December 2020 by a bipartisan vote of 228 to 164, but then-Senate leader Mitch McConnell (R-KY) blocked all action on the bill. The current Senate leader, Chuck Schumer (D-NY), has vowed to end federal cannabis prohibition.

Even though cannabis is legal for medical use in 37 states, the District of Columbia and several U.S. territories, it remains illegal for all uses under federal law. The MORE Act would resolve this conflict by removing cannabis from Schedule I of the Controlled Substances Act and decriminalizing its possession and use. If enacted, the bill would also provide reinvestment in communities adversely impacted by the War on Drugs and expunge certain cannabis offenses.

ASA has been urging Congress and the Executive branch to deschedule cannabis since the organization was founded in 2002. Schedule 1 classification is assigned to substances with no current medical use. Currently at least 4.3 million Americans use cannabis medicinally through regulated state and local programs, and even the World Health Organization has deemed cannabis to have medical value.

“If this legislation is signed into law, it will represent one of the greatest reforms of cannabis policy to date,” said ASA Executive Director Debbie Churgai. “Patients will no longer fear losing civil rights and protections, barriers to cannabis research would fall, and insurance companies would be able to cover patient costs.”

The bill’s provisions are currently under consideration by the House Committees on Energy and Commerce, Agriculture, Education and Labor, Ways and Means, Small Business, Natural Resources, Oversight and Reform, and Transportation and Infrastructure.

Americans for Safe Access’ PFC program has been approved by the Illinois Department of Finance and Professional Regulation (IDFPR) to provide trainings mandated by the state’s  Responsible Vendor Program. All owners, managers, and employees of dispensaries in Illinois are required to take 8-10 hours of mandatory training at hire and at least two hours of additional training each subsequent year.

The PFC Training Website allows businesses to track employees’ progress through the program. Each course has a test at the end and, once passed, generates a certificate of completion, which can then be provided to regulators as evidence of meeting the state training requirements.

The PFC program, founded in 2014, is the first and only ISO 17065 accredited cannabis and hemp compliance program in the U.S.  PFC provides training and education along with business certification to both medical and adult-use cannabis operators and hemp-CBD operators. For more information, see patientfocusedcertification.org.

Join Texas veterans to celebrate and learn more about their quest for full access to medical cannabis on Saturday, November 6 at 2:00pm at Texas Live! in Arlington.

Registration is free but donations are encouraged. Proceeds will benefit Americans for Safe Access.

PFC Director Heather Despres was interviewed last month about standards for CBD and the hemp industry. Video of the discussion on the podcast Move the Stairs can be seen on YouTube here and the podcast recording is on the M&C Communications website.

Americans for Safe Access knows that research findings are crucial to convincing policy makers to adopt policies that ensure safe access for medical cannabis patients. Created in partnership with CannaKeys, this free webinar explored how to utilize research to advance medical cannabis policy and acceptance for cannabis as a medicine. Healthcare workers, researchers, educators, policymakers, businesses, cannabis patients and consumers can all find benefit from the information shared here.

Panelists for the discussion moderated by ASA’s Dustin McDonald were Jordan Tishler, MD from the Association of Cannabinoid Specialists, Doug Reil and Uwe Blesching from Cannakeys, Elana Goldberg from The Cannigma, and PFC Director Heather Despres.

ASA and CannaKeys have recently partnered together to help broaden access to cannabis research and demystify the science of cannabis to support improved patient outcomes. As part of this partnership, all ASA members will receive a 30% discount on the platform. The CannaKeys 360° platform provides easy access to published science, aggregated critical data points, and guidance to practitioners and patients. CannaKeys provides over 3,500 cannabis related studies across 240+ medical conditions.

New Scoring System for ASA State of the States Report

The 2021 Americans for Safe Access State of the States Report, to be released next month, will feature new report card formats and scoring that highlight key areas of medical cannabis policy that affect patient needs.

ASA’s updated grading rubric emphasizes the many issues that are still blocking millions of patients from access. The new report cards put new emphasis on civil rights and patient protections, affordability, health and social equity, and product safety while also giving penalties for states that have policies that are actively harmful to medical cannabis patients.

Two new sections have been added for 2021: Affordability and Health and Social Equity. Scoring has been updated to double the weight of the Consumer Protection and Product Safety section. In addition, states can now lose points for policies that limit patient choice or access, such as bans on THC, limits on retail access, no system for adding qualifying conditions, and giving regulatory preference to non-medical use.

ASA’s new grading criteria and guidelines for better meeting the needs of medical cannabis patients will be shared with state legislators and other policy makers November 2-5 at the upcoming annual National Conference of State Legislatures in Tampa, Florida.

“It is no longer enough for states to simply allow medical use. They must also provide medical cannabis patients with the same rights and protections as every other medical patient in the state,” said Abbey Roudebush, Director of Government Affairs at ASA. “Access is not just about being able to purchase cannabis from a dispensary. If a patient can lawfully access cannabis as a treatment option, but can still face eviction, loss of employment, or loss of custody rights, the state is failing its citizens.” 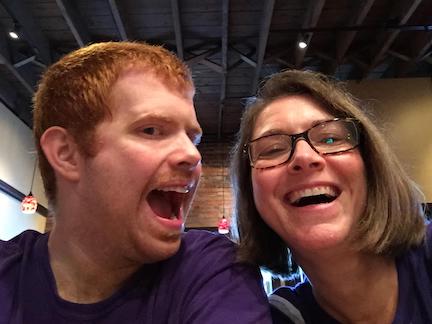 Why would a senior healthcare executive, business consultant, and community leader seek a graduate pharmacy degree focused on cannabis? The love of a son with severe autism was the answer for Michelle Wright.

In May, Michelle graduated from the first Master of Science program in the country in Medical Cannabis Science and Therapeutics from the University of Maryland Pharmacy School. When the program launched in 2019, she decided to apply so she could learn more about the medicine that she believed had saved her son’s life.

Michelle describes her 29-year-old son Ian as a grown man who still watches Barney, plays with stuffed animals, and needs help with everything from getting dressed to using the bathroom. His speech is also limited to that of a 2 to 3-year-old, which can increase his frustration when trying to communicate.

Michelle and her husband, Greg, knew that Ian would need lifelong care. Greg quit his job 25 years ago to be a full-time dad to Ian and their younger son Connor, while Michelle worked. But they were not prepared for the turn things took when Ian was no longer school age. Adult services for the severely autistic are not the same as those provided to children, and many adults with autism struggle after leaving school.

Ian’s behavior deteriorated in his early 20s. He had been on a few medications most of his life, with manageable side effects. But after leaving school at 21 he started to develop more self-injurious behaviors which resulted in more medications being added. He also experienced weight gain and tremors from his medication.

“We tried switching out his one anti-psychotic drug, but that just made things worse,” said Michelle. The doctors tried everything they could think of – neuroleptics, anti-depressants, mood stabilizers, blood pressure, anti-anxiety and anti-seizure medications (though he has never had a seizures). Then medications to manage the side effects. Ian developed facial tics and became extremely self-injurious, beating his head so severely he had to start wearing a helmet. He was also becoming more aggressive, lashing out in pain at family members. Between the ages of 25 and 27, Ian cycled through a cocktail of 13 different medications and lost 40 pounds.

“He was so thin. He became catatonic at times and wouldn’t eat or use the bathroom,” Michelle remembers. “Other times he would be violent and harm himself or punch a hole in the wall. It was so awful to watch my baby suffer. We were truly desperate. We had to try something different.”

“We thought, we’ve tried so many things. Shouldn’t we try cannabis before moving to even more intensive drugs and treatment?”

Ian’s doctors were not supportive, but Ian had been seeing a nurse practitioner at the practice who was willing to continue to see him and help manage his medications as they introduced cannabis to his regimen.

Once they started, Michelle saw improvement in Ian. Within a few weeks he needed less of the anti-anxiety medications he was taking four to six times a day. He began sleeping more and gradually emerged from the relentless psychotic and catatonic episodes. 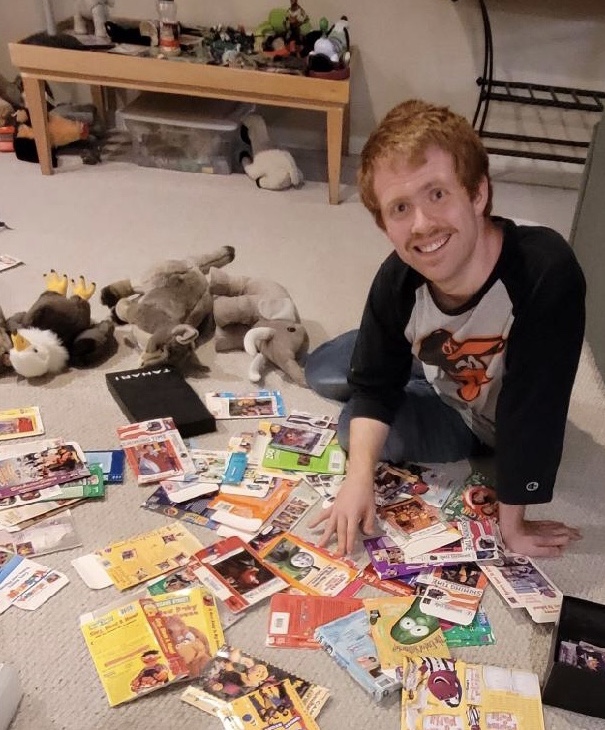 “I’d see the light in his eyes every once in a while,” says Michelle. “I’d wait for those few minutes a day of seeing my big guy again. I would say to my husband, ‘There he is!’”

Finding the right medicine and dose for Ian took lots of trial and error. He is sensitive to the cannabinoid balance and different terpenes. Fortunately, Maryland requires complete Certificates of Analysis showing both the major cannabinoids and the terpenes in whole-plant medicine, so Michelle and her husband can make their own cannabis pills with the right dosing for Ian.

After two years, Ian had weaned off all but one pharmaceutical medication that he takes at a lowered dose. He’s gained 20 pounds and most all of medication side effects have stopped. He still has some anxiety and outbursts of behavior, but he is more able to control his serious negative behaviors. He no longer wears a helmet for hours a day, and he is not aggressive to others.

“He has agency again. He wakes up happy, not screaming and banging his head,” Michelle says. “We take walks, and he holds my hand. He communicates more than he ever did before, expressing his wants and needs.”

As the holder of a graduate degree in medical cannabis science, Michelle is now better equipped to understand how medical cannabis has helped her son. But she recognizes that educating physicians can be an uphill battle.

“Doctors lack training on the endocannabinoid system, and legal barriers to research in the U.S. have created a bias that there isn’t any science there,” says Michelle. “But there is. We need much more research, but there is enough that cannabis should be an option for discussion with doctors when traditional treatments have failed.”

Michelle is grateful that her family has the ability to care for Ian and access to cannabis, knowing not everyone does. She hopes that sharing her family’s experience can help encourage more research and better access for patients like Ian who desperately need their medicine.

The MORE Act has passed in the House Judiciary Committee, putting us one step closer to ending the federal prohibition of cannabis once and for all! But we still have work to do.

We need to make sure the MORE Act passes the House, and we’re working on amendments centered around the needs of medical cannabis patients.

We support the MORE Act because it would remove cannabis from the Controlled Substances Act (CSA) and benefit the medical cannabis community in several ways:

We urge you to contact your member of Congress to ask that they support the MORE Act. Use the simple online tool below to email your Representative. Take action today at www.safeaccessnow.org/more21.