On August 6, ASA responded to the White House’s request for comments on how federal drug control policy has disproportionately harmed some communities. ASA’s response to the Office of National Drug Control Policy (ONDCP)explained why medical cannabis is a social equity issue and provided substantial recommendations on how to protect patients and harmonize federal and state laws.

“ASA appreciates the opportunity to address how federal policies and agencies punish patients for using medicine that is legal across 37 states,” said ASA Executive Director Debbie Churgai. “We hope the ONDCP will recognize patients’ rights and needs are central to reforming federal policy and quickly adopt the suggestions we’ve offered as the nation’s largest patient-centered medical cannabis organization.”

For more details, see ASA’s press release at www.safeaccessnow.org/asa_submits_comments_to_white_house2021. The full comments can be read here. 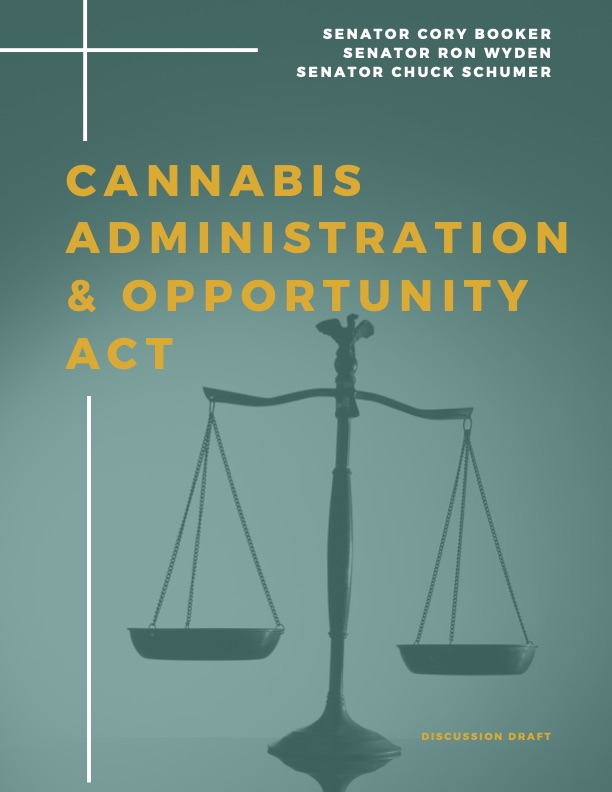 ASA’s detailed summary of the proposed Cannabis Administration and Opportunity Act (CAOA) is online at www.safeaccessnow.org/caoa_summary. The imminent U.S. Senate bill promises to be the most wide-reaching and important cannabis legislation ever considered by Congress.

The bill has not yet been introduced, but Senate Majority Leader Chuck Schumer (D-NY) and Senators Cory Booker (D-NJ) and Ron Wyden (D-OR) have released a proposed outline and requested comments on it from the public and stakeholder organizations such as ASA.

ASA has reviewed and summarized the 163-page “discussion draft” for its potential impacts on safe access for patients on the ASA blog, including decriminalization of cannabis, public safety and states’ rights; research, training and prevention; restorative justice and opportunity; and taxation and establishment of a trust fund.

“This bill represents the most comprehensive approach to federal cannabis policy reform yet contemplated by federal lawmakers,” said ASA Executive Director Debbie Churgai. “Yet we believe there is more work that can be done to protect patients and will submit additional recommendations to the senators.

If enacted as outlined, the CAOA would deschedule cannabis, leaving most regulatory decisions to states. Social justice provisions include expunging criminal records for low-level cannabis offences and establishing an equity-focused job training program.

The deadline for comment is September 1, 2021. The bill is likely to be introduced later this fall.

ASA’s PFC program has recently launched a new training platform to host all of our training videos, exams, and learning guides. This new website offers more functionality than the old system, particularly for businesses that are enrolled as each may assign an administrator who can monitor their employee's progress with training and download training certificates as needed. 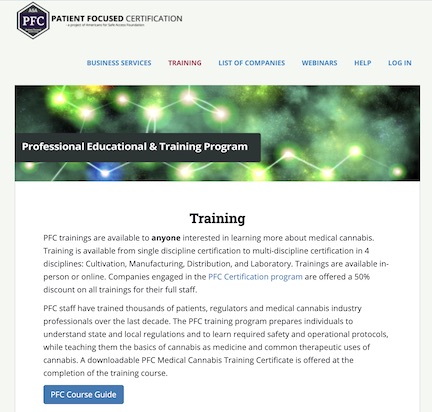 PFC has also expanded its state compliance training courses with a new one Illinois. The Illinois course is designed to meet all of the requirements of the state’s Responsible Vendor Program, for which PFC has submitted an application.

Illinois requirements include training on:

PFC will also be launching updates to its National Cannabis Standards Training courses for Manufacturing, Dispensary, and Laboratory Operations in the next month. An updated NCST course for Cultivation and Processing Operations and is already available on the PFC website either a la carte or as part of PFC’s Staff Training bundle.

More information is available at patientfocusedcertification.org/training.

Confronting the Challenges of Adult-Use Laws

In many states, when adult-use cannabis laws are adopted, medical cannabis programs are left by the wayside, to the detriment of patients. ASA’s latest recommendations on the emerging adult use laws in the US are covered on ASA’s blog.

“As states implement and update laws on adult-use, it is imperative that they continue to prioritize policies that support patients,” said ASA Executive Director Debbie Churgai. “ASA will continue to work with lawmakers and regulators to ensure patient needs are not forgotten or ignored.”

ASA’s blog details how changes in state cannabis programs have made access for patients comparatively harder and more cumbersome. The areas of concern include:

More information is at www.safeaccessnow.org/adult_use_blog.

ASA Webinar on Cannabis and Cancer 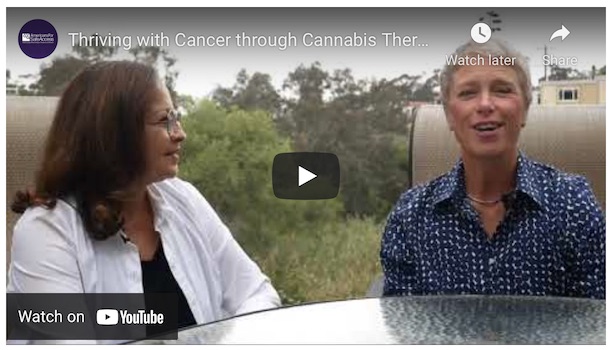 Last month, ASA hosted a free webinar in collaboration with Holistic Caring on how cannabis therapeutics can help people living with cancer thrive.

The webinar featured the stories of Jessica and Rick, two patients living with cancer, and discussion with the founder of Holistic Caring, Elizabeth Mack, RN, and ASA Executive Director Debbie Churgai.

Discussion covers how to approach cancer with cannabis as a tool to better manage conventional treatment side effects, the pre-clinical research on cannabinoids as anti-tumor agents with the potential to heal, and how to find wholeness in body-mind-spirit from cannabinoids to boost nutrition, movement, and connection.

The recorded webinar is now available to view free online at www.safeaccessnow.org/cancer21_video.

Events featuring ASA staff are scheduled for the next two months in New York, Washington DC, Baltimore and Las Vegas. 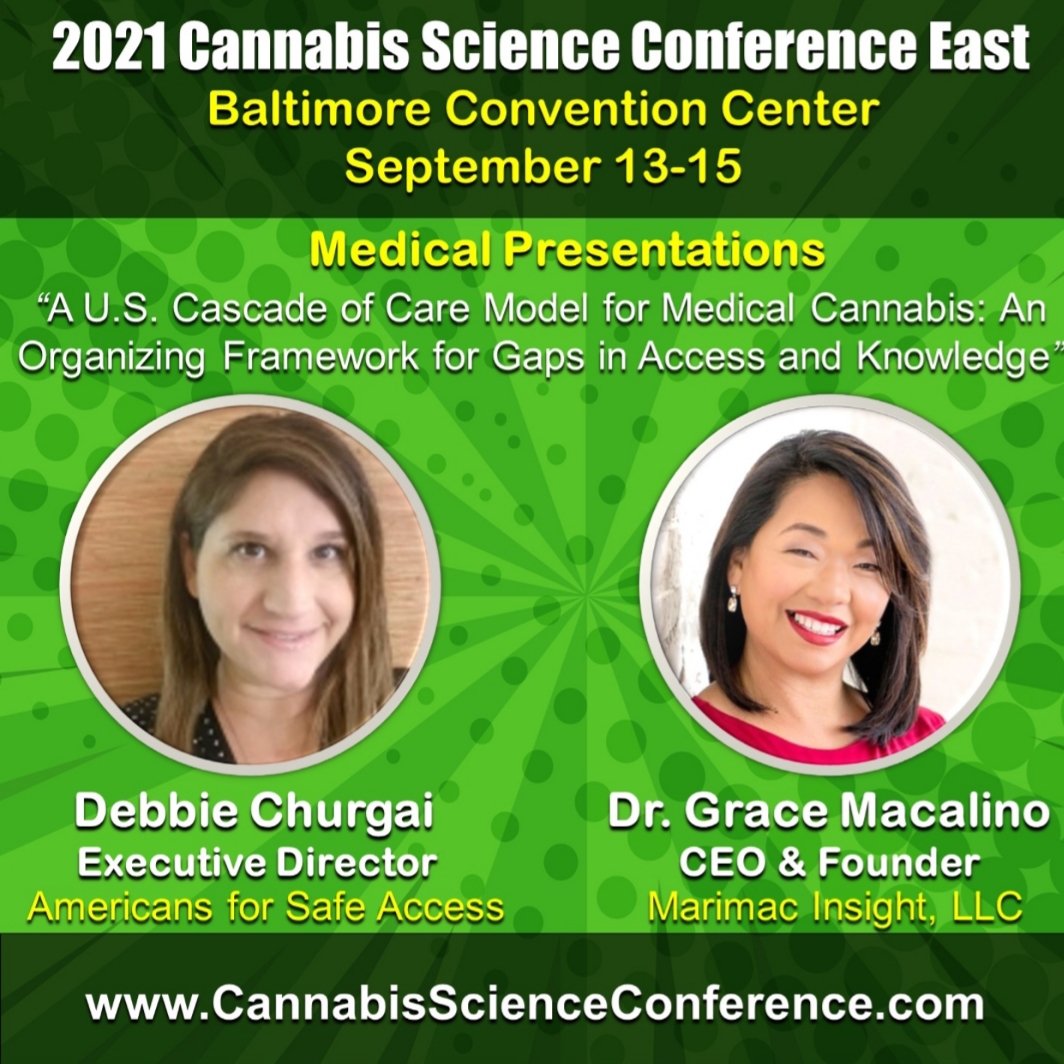 More information and registration options for some of the events are at the links below: 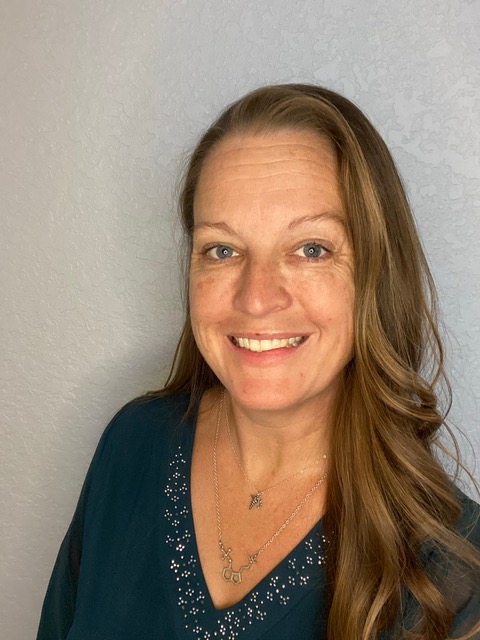 Deb McCauley had been a medical professional for more than two decades, and had juggled her own seizure medications for nearly as long, when a friend approached her in the summer of 2018 with an alternative she’d not considered.

“Cannabis can really help,” Deb’s friend told her – with sleep, pain and her peri-menopausal problems.

A former Air Force combat medic from a military family, cannabis had not been part of Deb’s experience.

“’Just say no’ was my life,” Deb says. “But I was just so tired, I was willing to try anything, even though it was illegal then in Virginia.”

As it turns out, her friend was right. It helped with all her conditions, and that gave Deb pause.

“Well, wait… Why does this work so well?” Deb remembers wondering. “It got my nursing brain working.”

After her epilepsy-related discharge from the Air Force, Deb had moved to northern Virginia, where she met her husband, with whom she had two sons, now ages 9 and 11. She worked in acute care and every aspect of hospitalization over the years that followed but retired from bedside nursing due to burnout and physical injury.

At the point where she discovered cannabis could help with all her maladies, Deb was finishing her undergraduate degree and considering graduate nursing programs. She turned to researching cannabis and its mechanisms of action. She found the Cannabis Nurses Network and the Cannabis Nurses Association. And she connected with Virginia NORML, which became her first network of allies.

“My knowledge as medical professional was sought after,” Deb says. “They wanted my clout.” 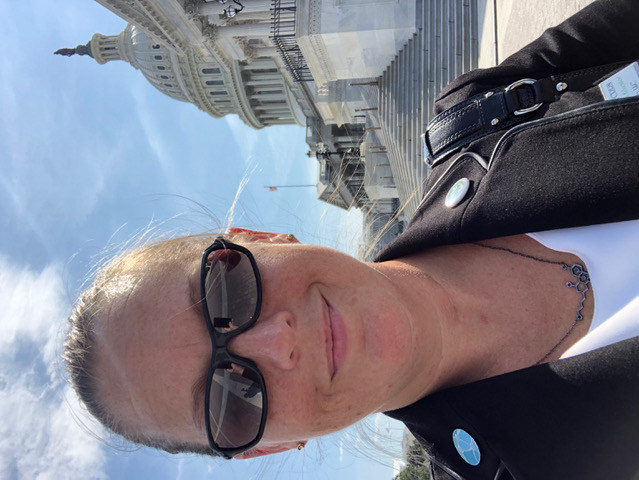 In January 2019, she attended the Virginia NORML lobby day and discovered she could make a difference. It was intoxicating.

“That advocacy, talking with those legislators everyone is afraid of -- it was amazing,” Deb says. “They just wanted to listen, and they definitely wanted to listen to me, because I was a medical professional.  I know for a fact Tim Hugo, my representative, changed his vote on the MORE Act after that visit.”

Her confidence in confronting lawmakers was bolstered by her prior success negotiating her cannabis use with her doctors. She knew her neurologist not just as a patient but a nurse from working in the same hospital, so she brought him scientific articles and asked is he knew we have an endocannabinoid system. (He didn’t.)

“This is part of my passion--we need education!” Deb says. “He couldn’t fully endorse it because it was still illegal then, but he was really supportive.”

Together, they made a plan for tapering off the prescription drugs she took to control her epilepsy.

“I was off all my pharmaceutical medications by fall 2018,” Deb says. “It really helps with my focus, and I was doing so much better with school.”

That success gave her confidence to talk to lawmakers, and it convinced her to change her path in nursing. She decided to become a nurse practitioner (NP) so she could treat and educate patients directly. There was just one catch.

She had to pass a drug test to enroll in the program.

Secretly, she stopped using cannabis and started reintroducing the pharmaceutical medications. Within 10 days, her husband confronted her.

“You’re acting stupid,” she remembers him saying. “What did you do?”

She had not realized the cognitive side effects of the medications were obvious, or even the extent of them. The conversation with her husband made it clear the trade off was not worth it. So instead of an NP program, Deb is now in law school at Florida State University, pursuing a Juris Masters with focus on health care regulation.

Her experience with cannabis has been profound. She’s been able to maintain her health and even lost 50 pounds. But it is the advocacy work she finds most compelling, something she realized on Capitol Hill, when she sat in the audience as members of Congress heard testimony on the MORE Act.

“I got bit by the advocacy bug at the Virginia Lobby Day, but sitting in on the first Judiciary Committee hearing -- that was amazing,” Deb says. “The adrenaline came back, like being an EMT. It was an invigorating day.”

Today, Deb is working with the Cannabis Nurses Network as the lead for their political action and advocacy group. Their current project is creating model legislation for a nurses protection act for municipal, state and federal lawmakers that would, among other things, remove pre-employment cannabis screening. She has also recently contracted with Relias to write a course for nurses.

“It’s been remarkable how I’ve been able to reengineer my nursing career and still benefit my community,” says Deborah. “It’s also shown me I have to be better in my self-care. I can’t take care of others if I can’t advocate and care for my most important patient—myself. That’s the nugget of advice I like to leave with everyone.”

Each year ASA requests feedback from patients and caregivers to help shape ASA’s annual State of the States report. Your participation in this short survey will help us produce quality analysis and potentially change laws or regulations to better serve the needs of patients.