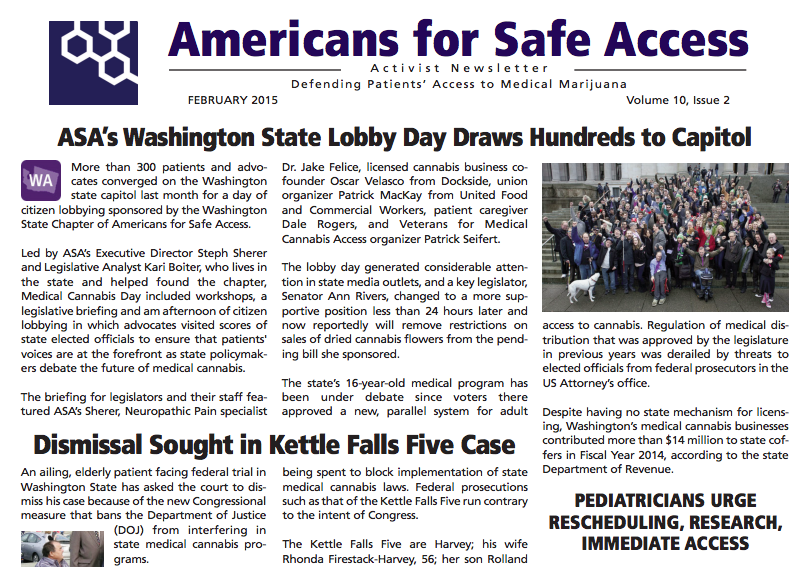 You’ll find out about ASA Chapter lobbying success, why the new federal budget may stop prosecutions, and what pediatricians now say about medical use.

Those stories and more, plus the contest for next month’s National Unity Conference in Washington, DC, are in a PDF to print and share (click here), or you can read it on ASA’s website (click here).

STATE LOBBYING. More than 300 medical cannabis patients and advocates converged on the Washington state Capitol late last month for a day of citizen lobbying sponsored by the Washington State Chapter of Americans for Safe Access.

PROSECUTION CHALLENGED. An ailing, elderly patient facing federal trial in Washington State has asked the court to dismiss his case because of the new Congressional measure that bans the Department of Justice (DOJ) from interfering in state medical cannabis programs.

PEDIATRICIANS ENDORSE. A professional organization representing more than 62,000 pediatricians in the US last month endorsed the use of cannabis for some seriously ill children and called on the federal government to conduct more research and change the classification of the drug to recognize its medical uses.

ILLINOIS REVERSAL. An unexpected turnabout in Illinois late last month saw Gov. Bruce Rauner issue more than 70 state permits to cultivate and distribute medical cannabis to registered patients. The move came only a week after the governor said he had halted the granting of any licenses.

ISRAELI BUSINESS. Long a leading center for medical cannabis research, Israel this month is the site of an investor’s conference, CannaTech Israel.

NATIVE GROW. A large cultivation operation in northern California will break ground this month, the first on land belonging to a Native American tribe.