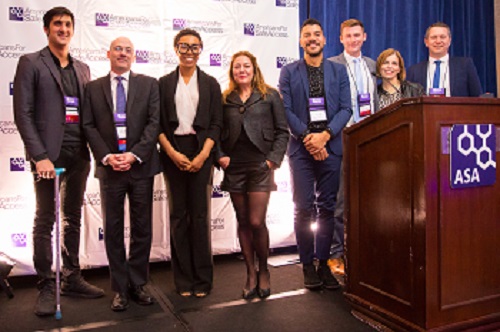 ASA holds this conference annually with the purpose of bringing patients to Washington, DC to speak to members of Congress about medical cannabis. ASA was able to bring over 300 patients from all over the country to DC to talk face-to-face with their representatives; 125 of these participants received scholarships by ASA sponsors. Every year, ASA’s scholarship program financially supports patients from around the country to attend the conference. The scholarship program gives patients and advocates, who would otherwise not be able to afford it, the chance to come to DC to talk to their federal representatives face-to-face about important medical cannabis issues. This year, ASA scheduled a total of 147 meetings with conference participants and Congressional offices.

This year, ASA also announced new legislation that puts the focus on federal access of medical cannabis, separate from adult use. In anticipation of a change in the classification of cannabis under both domestic and international frameworks, ASA and international policy experts have written a legislative proposal, the “Medical Cannabis Control Act of 2019” (MCCA), to create a new agency that provides effective oversight to the use of medical cannabis in the U.S. rather than the current system of punishing patients and frustrating research. The full text of this legislation is available in Chapter 7 of Medical Cannabis In America: The Medical Cannabis Briefing Book, 116th Congress.

“I am excited to be starting this next chapter of ASA with an amazing new Board that shares the same mission of ensuring safe access to patients and passion towards medical cannabis advocacy as I do,” said Steph Sherer, President and Founder of Americans for Safe Access. “It brings me great pride when I think of how ASA’s programs and projects have become pillars to the medical cannabis movement, and I look forward to this new Board accelerating our mission of safe and affordable patient access even further.”

Steph Sherer- Board President: Sherer formed Americans for Safe Access in 2002 with the purpose of building a strong grassroots movement to protect patients rights to safe and affordable medical cannabis. As a powerful advocate, she has trained over 100,000 individuals across the country on civic engagement. Sherer has become the foremost international leader and expert on medical cannabis patient advocacy and, alongside American Herbal Products Association (AHPA), created the first industry standards in the areas of distribution, cultivation, analytics, and manufacturing, packaging and labeling.

Ben Bronfman: Bronfman is a founding member of Global Thermostat, an atmospheric carbon capture firm with offices in New York and Menlo Park, CA.  He is also the co-founder of BIM a mobile payments start up with offices in New York and Atlanta. Bronfman is also a founding partner at Dioscorides Global Holdings. When not working on these projects, he enjoys making music and has produced tracks for Kanye West and others.

Don Duncan: Duncan  is a founding member of Americans for Safe Access. Duncan currently works in Government Affairs for BHC Consultants, LLC, a cannabis consulting firm located in Los Angeles serving select cannabis businesses statewide. He previously served as the California Director of ASA, in which role he worked closely with lawmakers in California to adopt the first local and state licensing programs for cannabis businesses and other significant legislation. Duncan is a twenty-year veteran of the cannabis and medical cannabis industries.

Jayan Fazal-Karim: Jayan Fazal-Karim: Fazal-Karim serves as the Director of Alternative Investments at FK Group where he is in charge of sourcing new investments in “alternative” spaces, such as cannabis, technology, and renewable energy. He also serves as Managing Director at Think Green Consulting where he consults high net worth individuals on how to invest in the cannabis industry in a socially conscious and impactful way. Previously, Fazal-Karim was the Lead Product Engineer at Cannabase, a B2B platform that centralizes and organizes the wholesale cannabis market.

Pavel Kubů, MD: Dr. Kubů worked for the Intel World Ahead Program for Healthcare in Central and Eastern Europe for ten years. In 2006, Pavel was appointed chairman of the Ethical Commission at the Czech National Monitoring Center for Drugs and Drug Abuse. He co-founded Elon 2011, which is focused on R&D of wearable plastic electronics with printed light for photodynamic treatment methods used in ophthalmology, dermatology, neonatology, mental health, oncology and surgery. In March 2015, he became a founding member of International Medical Cannabis Patient Coalition. He is also among the founders of the International Cannabis and Cannabinoids Institute.

Carla Rossotti Vázquez, MD: During Rosotti Vázquez’s work at VarMed Management, she led an interdisciplinary team of healthcare professionals in a number a medical outreach missions where they would tend to the medical needs of patients affected by the Hurricane Maria in 2017. She is very active with the Medical Cannabis Program in Puerto Rico. She was part of the first group of physicians to be Certified by the Puerto Rico Health Department to write medical cannabis recommendations for qualifying patients. She is one of the founding members and current Vice-President of “Sociedad Puertorriqueña de Ciencia y Medicina Cannábica” (Puerto Rican Society of Science and Cannabinoid Medicine), and is also a founding member for “Miembros de la Industria del Cannabis Medicinal” (MICaM, Members of the Medical Cannabis Industry).

Nick Ventura: Ventura is highly regarded for accomplishments in planning and leading comprehensive marketing strategies in support of the businesses he has started and those with which he has been involved. Ventura was the co-founder of Venley, one of the largest apparel companies in the sports licensing space. Because of his initiatives, Venley forged productive, professional relationships with integral stakeholders, and orchestrated efforts in securing 400+ exclusive sports apparel licenses from WME/IMG, CAA, and Learfield.

ASA is the largest national organization of patients, medical cannabis providers, medical professionals, scientists and concerned citizens promoting safe and legal access to cannabis for therapeutic use and research with over 100,000 active members in all 50 states. Since its inception, ASA has successfully shifted the national debate around medical cannabis, which has focused solely on the legality and ethics of arresting and prosecuting patients for cannabis use, to include the real concerns of patients, such as access and civil protections. ASA has worked with lawmakers across the country to adopt and improve medical cannabis legislation and regulatory policy as well as representing patients on Capitol Hill.