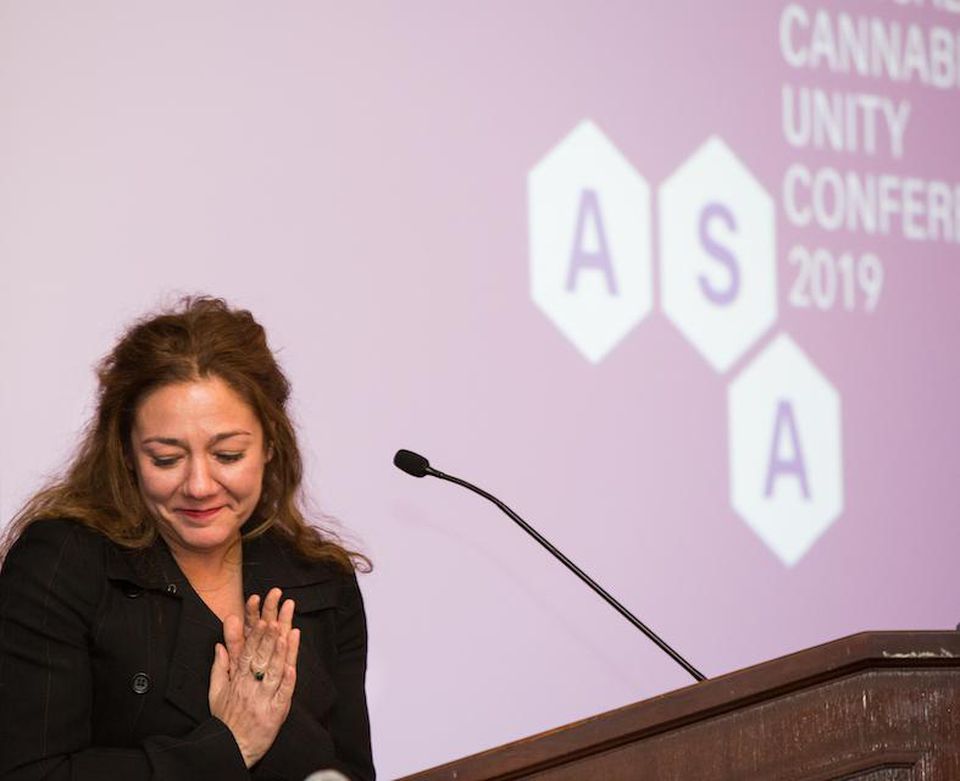 Americans for Safe Access (ASA) Board of Directors is proud to announce that ASA Founder and President of the ASA Board, Steph Sherer, has been made President of the International Cannabis and Cannabinoids Institute (ICCI) in Prague, Czech Republic.

Co-founded by Sherer in 2015, ICCI is a recognized Center of Excellence and works closely with international governments, universities, and research institutes as well as companies in cannabis, hemp, bio-tech, and agricultural sectors to strengthen the medical cannabis industry. ICCI was founded as a joint project of patient organizations, scientific societies, and American investment company Dioscorides Global Holdings.

Since 2002, Sherer, a leading national and international expert on medical cannabis, has helped to pass medical cannabis legislation and regulatory policy across the U.S. and its territories through ASA, the largest nonprofit organization of patients, medical professionals, scientists, and concerned citizens promoting safe and legal access to cannabis for therapeutic use and research. Sherer remains President of ASA and is expanding her focus to strengthen the industry.

“For the last 17 years, I have worked to break-down societal and governmental barriers for patients who need access to medical cannabis,” said Sherer. “Now that these barriers are tumbling down, it is important that the industry evolves to provide products that are safe, standardized and targeted, and that there is the scientific infrastructure to support these efforts. I am excited to include the scientific community, investors, and other sectors of the industry that are committed to serving the patient community in an effort to expand access to medical cannabis.”

“Sherer has helped to change the perception of cannabis among governments, organizations, and the general public at the national and international levels.” – ASA co-founder and Board Member, Don Duncan. “As a pioneer in national and global medical cannabis advocacy, Steph has helped push the conversation forward in such a fruitful way that cannabis and cannabinoids are now generally considered as a medicine in most U.S. states and several countries around the world. We have no doubt that under Sherer’s leadership as ICCI’s President, the organization will be able to thrive in their efforts to bring additional evidence-based science to the medical cannabis field,” said Duncan.

"Many congratulations to Steph Sherer on her appointment as President of ICCI. This is a step that will surely propel cannabis medicine in the right direction internationally as well as in the United States." – Dr. Ogadinma Obie, ASA Board Member

"Steph Sherer has accomplished something truly remarkable in founding Americans for Safe Access, and I know that she will continue to create more value for the industry in her new role for ICCI. Her initial vision turned into an entire institution, and along the way, she never lost sight of this industry's roots in medicine. Everyone deserves safe access to this plant, but it's the medical patients that we need to fight for. ICCI has the power to accomplish this by leading this industry's global businesses in the compliant direction." – Nic Easley, ASA Board Member

“Steph Sherer co-founded ICCI 4 years ago with the mission to create a scientific institution that put the focus on patient access. I can think of no better person to serve as their President to help accomplish their goal of helping to remove barriers to access for patients globally. Steph is leading by example to show that you can work in any facet of this industry while also putting the needs of patients first and supporting advocacy.” – Debbie Churgai, ASA Interim Director

"I started investigating and understanding the medical cannabis world in 2009. Since then, I have never encountered anyone that has as much dedication and passion for helping the patient community as Steph Sherer. No Fluff. She lives and breathes patient advocacy. Her enthusiasm for this issue is unmatched.” – Ben Bronfman, ASA Board Member. “Steph has perpetuated some sort of holistic jujitsu that has amounted to tectonic change in the medical cannabis space. Although Sherer has come of age amidst a sexist white male culture that holds people back, she has continued to fight for the rights of patients around the globe. She is a warrior, an innovator and a hero to the patient community."

“I had the pleasure of meeting Steph Sherer back in 2016 when attending the ASA Unity Conference. She was energetic, knowledgeable, passionate, and humble. She spoke from the heart. As a member, I have come to get to know her better and follow all of her accomplishments in the medical cannabis arena. I must say that I am in awe of how much she has been doing all these years for the medical cannabis community. She firmly believes in providing patients safe access to cannabis treatments, regulating products to the highest standards of quality, and encouraging education and research in the field. Steph will do an excellent job as President of the ICCI and they are more than lucky to have her as part of their team.” – Dr. Carla Rossotti Vázquez, ASA Board Member

“There are very few people well suited to help lead a company at the forefront of cannabis research in the world right now, and Steph is one of those few people. Her extensive knowledge and experience in the space with a focus on the medical aspects of the plant and the industry will serve her well in this newfound role. I can’t wait to see what comes out of her upcoming work.”< – Jayan Fazal-Karim, ASA Board Member

“We are excited that Steph has decided to focus more on ICCI in this next phase of her career. She has been a strong patient advocate and has a clear vision of the trajectory of the medical cannabis industry. I am honored to be electected ASA board member as first non US citizen and dedicated to support ASA programs scaling to extend patient access globally.” – Dr. Pavel Kubu, ICCI CEO.

Americans for Safe Access (ASA) is the largest national organization of patients, medical cannabis providers, medical professionals, scientists and concerned citizens promoting safe and legal access to cannabis for therapeutic use and research with over 100,000 active members in all 50 states. Since its inception, ASA has successfully shifted the national debate around medical cannabis, which has focused solely on the legality and ethics of arresting and prosecuting patients for cannabis use, to include the real concerns of patients, such as access and civil protections. ASA has worked with lawmakers across the country to adopt and improve medical cannabis legislation and regulatory policy as well as representing patients on Capitol Hill.