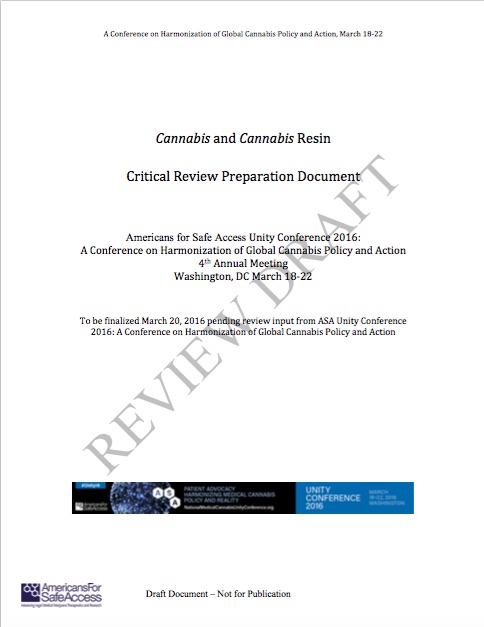 You have an important job to do, if you are attending ASA’s National Medical Cannabis Unity Conference, March 18-22, at the Lowes Madison Hotel in Washington, DC. We will be finalizing a document at the conference that will be submitted to the United Nations Commission on Narcotic Drugs (CND).

The CND meeting in Vienna coincides with the ASA Unity Conference this year. Unity Conference participants will have the opportunity to weigh in on this review document on Sunday March 20th in special stakeholder meetings. Allies within the CND will be calling on the CND, WHO, and UNGASS to use this Critical Review Preparation Document as a stepping-stone to move international cannabis policy forward.

This matters for medical cannabis patients in the United States and all over the world. The UN Single Convention Treaty of 1961 blocks most of the world’s nations from researching or allowing for legal medical cannabis. This treaty is often cited as a reason why the United States cannot make a meaningful change in its national policies towards medical cannabis – despite that fact that forty states have already adopted some kind of law recognizing its medical benefit. Removing this obstacle brings us one step closer to our ultimate goal – safe and legal access for everyone who needs it.

The task for attendees is not to re-write the document or to comment on the authors' writing ability, but to strengthen the existing content. Reviewers are being asked to look for grammatical errors, missing references, or inaccurate/dubious information.

To be a part of this historic process, register today for the ASA Conference today!

Thank you in advance for your dedication in the efforts to improve cannabis policy.

Happy reviewing, and see you in DC!