Tennessee patients who need access to medical cannabis will have to continue waiting. Despite the opportunity to pass a bill that would have legalized medical cannabis in Tennessee, lawmakers, particularly in the Senate were apprehensive to move the bill forward. Instead, lawmakers elected to form a task force to determine the path towards legalizing medical cannabis in the State.

Patients should not have to continue to wait for medicine they need.

H.B. 0495, a bill in the Tennessee state house that would have legalized cannabis-based medicines has been taken off the State's legislative calendar for the session, which ends in a few weeks.  The bill sponsored by Representative Jeremy Cosby (R-Cosby) and Representative Steve Dickerson (R-Nashville) would have allowed 50 medical cannabis growing operations in the state, 15 of which would have been in economically depressed areas. Under the bill, a medical cannabis program would have been administered by the Department of Health. 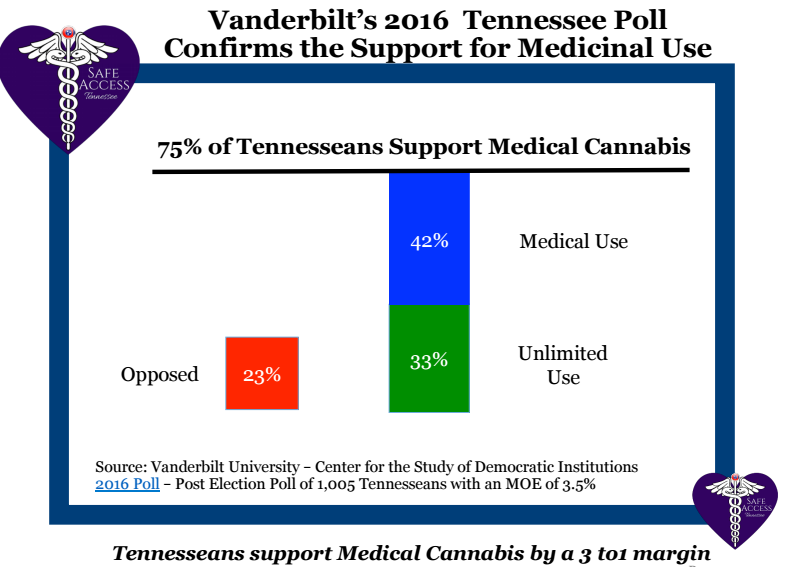 This bill being dropped from Tennessee's legislative calendar is a tremendous setback for patients in the Volunteer State, but it also is confusing. Medical cannabis has wide support among Tennesseans including those in law enforcement and church members. Patients, physicians, and caregivers all recognize the benefits of medical cannabis. It seems as the last hurdle to clear comes in the form of Tennessee State Senators.

"Our Republican Senate has clearly failed to do the will of the People. They supported the failed and cruel policies of Federal Bureaucrats over the interest of sick children, the terminally ill, and disabled citizens that have conditions that Cannabis clearly helps.”  said David Hairston, Chairman of Safe Access Tennessee and a long term Republican activist who attended the Republican National Convention this past July.

While the bill has been taken off the calendar, the fight for medical cannabis in Tennessee is far from over. This summer the Leadership of the Tennessee Legislature will establish a Medical Cannabis Task Force to determine the path forward for their medical cannabis program.

The Task Force is a step in the right direction, but it is time that the people of Tennessee join 28 other states and the District of Columbia in guaranteeing safe access to medical cannabis.