On Friday April 21, the New York Times ran a front page story with the headline: "F.D.A. Dismisses Medical Benefit from Marijuana." According to Americans for Safe Access, there were three major problems with the Food and Drug Administration's (FDA) claim:

In response to the Food and Drug Administration's (FDA) bogus press release condemning medical cannabis, 24 Members of Congress have drafted a strongly worded letter to FDA asking the agency to either produce evidence of new research or explain motivation behind its statement. This effort was led by Representatives Hinchey (D-NY), Paul (R-TX), Frank (D-MA) and Farr (D-CA) in collaboration with ASA.

Furthermore, ASA will be sending our own letter to HHS and FDA asking these agencies to explain their contradictory statements on medical marijuana and produce the evidence that supports the Administration's position that "marijuana has no accepted medical value."

The FDA's job is not to play politics; the FDA's job is to protect public health. If the government is going to stick to its position that marijuana does not have medicinal benefits, then HHS should be compelled to show us the science and respond to our DQA petition. If not, ASA will take the government to court. It's that simple. 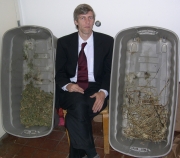 James Blair with a portion of his returned property.

Medical marijuana patient James Blair was arrested on marijuana cultivation charges in 2003 and had his medicine and equipment confiscated. Blair, who is partially paralyzed from a diving accident, received a check for $15,000 on April 11, 2006, from the City of Emeryville for marijuana seized by its Police Department. With the assistance of ASA, Blair received one of the largest cash settlements to date in a case of wrongful seizure. The City of Emeryville has now adopted a policy of not confiscating medical marijuana from qualified patients.

It is ASA's hope that financial pressures such as these will deter police from violating the rights of medical marijuana patients. "By making government pay for their transgressions through successful lawsuits like mine," said Blair on the day he received his check. "Americans for Safe Access and I are going to force police agencies to adopt sensible policies that uphold patients' rights."

After the dismissal of Blair's criminal charges, stemming from the 2003 raid on his home by Emeryville police (EPD), a Superior Court Judge issued a court order, in 2004, for the return of his property. Soon after, Blair went with court order in hand to pick up his property, but was verbally denied it. Under threat of contempt of court, EPD finally agreed to return only some of Blair's property. Blair learned that due to a burglary at an off-site secured police evidence locker, many of his possessions, including most of his cultivation equipment and much of his medical marijuana plants, were stolen.

With this monetary penalty, and ASA's recent success in reversing a mandatory seizure policy by the CHP, patients are winning the battle for their rights under state law. Widespread adoption of sound police policies on medical marijuana are within sight.

Los Angeles ASA has been going strong for over a year, and over the past few months, they have kicked their work into a higher gear. The chapter has worked on campaigns at all levels of government, from city politics to federal law.

In October, 2005, LA ASA chartered a bus to travel to San Francisco, to join with local activists in rallying for the rescheduling of marijuana. This two day long journey brought over 50 activists from San Diego, Orange County, Los Angeles and Santa Barbara to the rally.

The chapter has also organized many rallies of its own. After DEA raids in December and March, they organized successful emergency response rallies, drawing over 30 activists to each protest and garnering local media attention. They also held a rally during medical marijuana week targeting the Los Angeles Police Department, which drew more than 50 patients and supporters.

Proving their ability to lobby effectively, LA ASA activists ensured the passage in LA County of the most progressive medical marijuana dispensary ordinance in the state. They set up lobbying meetings with all of the supervisors, and packed the chambers with more than 80 activists at the hearing. The legislation does not cap the number of dispensaries, allows on-site consumption, and puts regulation in the hands of the planning department, instead of the Sheriff.

LA ASA is now gearing up for the final hearing of the LA County ordinance on May 9th. Then, they will move on to working with the City of Los Angeles to adopt regulations to protect safe access to medical marijuana.

Several medical marijuana defendants are in jail awaiting trial. Please write to them and show your support! (To find out details about these POWs, visit www.SafeAccessNow.org/PendingCases)