Medical marijuana advocates descended on Capitol Hill earlier this week and in a room full of Congressional staffers, one of them got down on his knees, clasped his hands, and literally begged.

Tim Smale, a user and owner of a medical marijuana dispensary in Maine, pleaded with the young aides to listen to patients like him, do some research, and convince their bosses to support a bill that would recognize the plant’s medicinal value.

Begging members of Congress to change the way they think about pot is one strategy — paid lobbying is another. Paid lobbying on marijuana and citizen lobbying by people like Smale are both gaining fast acceptance in Washington, D.C.

In the city where the term lobbying was coined, where millions of dollars are spent on it by big industries like oil and gas and pharmaceuticals every year, there are some new players in the game.

Kari Boiter, who was part of Monday’s lobbying day by Americans for Safe Access, said there has been a recent “paradigm shift” and that marijuana is no longer a “scary” topic for Congress members to discuss. 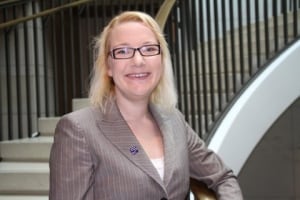 Kari Boiter, a medical marijuana user from Washington state, was in Washington, D.C., on Monday for a lobbying day with Americans for Safe Access. (Meagan Fitzpatrick/CBC News)

“I’ve seen a huge, dramatic shift,” she said, describing how this was her fourth trip to the capital in the last year from Washington state where she lives and where pot was recently legalized.

A year ago she had trouble getting face time and now she not only gets meetings, she feels she’s really being heard when she describes how cannabis helps ease painful symptoms caused by a genetic condition.

“There’s no doubt that the value of the human story with these lawmakers is what makes the difference, hearing from their constituents who vote for them about what this means to them,” she said.

But paid lobbyists have their role too, Boiter said, and that’s where Michael Correia and Dan Riffle come in. They are known around Washington as the two full-time lobbyists trying to wield influence on the marijuana file.

Correia, who was recently profiled in the Washington Post, works for the National Cannabis Industry Association and taps his Rolodex and connections from working on Capitol Hill for nine years to lobby for tax code reform, for example, and new banking regulations.

Riffle, who is with the Marijuana Policy Project (MPP), focuses more on getting the federal government on board with medical marijuana and with ending prohibition.

Riffle first worked as a lobbyist for MPP at the state level and about a year ago he became the group’s federal lobbyist. Capitol Hill is basically his office and during an interview in its hallways he said lobbying on marijuana has “absolutely” become more accepted.

“It’s definitely less taboo, it’s less sexy. It’s just sort of a normal, mainstream everyday issue,” he said. The young lawyer, dressed in a suit, blends in so much that a woman stopped and asked if he was an intern.

If anything, Riffle might have trouble getting taken seriously because of his age — 32, though he looks younger — not because of his lobbying subject matter.

“The good news is every door on Capitol Hill is open to me,” said Riffle, adding that even Congress members who are opposed to legalization still want to talk to him to get educated on the issue.

Marijuana used to be a “third rail” issue in Washington that wasn’t high on the agenda, so to speak. But now, whether they like it or not, Congress and the White House have to pay attention.

There are a few reasons for that. One is public opinion. Poll after poll indicates that a growing number of Americans are fed up with the war on drugs, don’t think people should go to jail for small amounts of marijuana, and support legalizing pot if not for recreational use then for medical purposes.

This is a midterm election year and lobbyists are working hard to keep the pressure on members of Congress to support an issue they say their constituents care about.

It's also because around 20 states have legalized medical marijuana and Washington and Colorado have legalized it for recreational use, all in conflict with federal law. The Department of Justice has a headache now in terms of prosecuting drug crimes and the Treasury Department has had to respond to banks not wanting to accept cash from marijuana-related businesses for fear of prosecution. 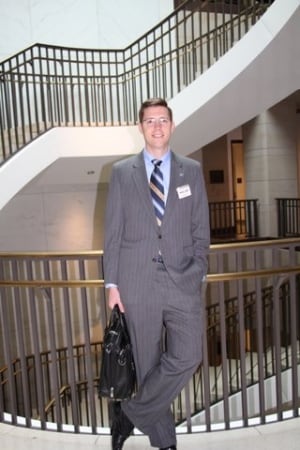 Dan Riffle, lobbyist for Marijuana Policy Project, says his work is less taboo than it used to be and that doors are now opening to him on Capitol Hill. (Meagan Fitzpatrick/CBC News)

There are also several pieces of legislation calling for various reforms that members may have to take a position on at some point. Congress will also have to decide whether to block a bill passed right in their own backyard by D.C.'s local government that decriminalizes small amounts of marijuana.

“It’s certainly exciting,” Riffle said about his job. “This is an issue that is in the news every day, it’s developing faster than any other industry or any other issue out there on Capitol Hill and is getting a lot of attention.

"I certainly love shaping policy and talking to policymakers here in Washington. It’s a great job and I love it.”

Riffle went from trying to put drug users in jail to advocating for them. He used to be a state prosecutor in Ohio. He switched sides because he was frustrated prosecuting minor drug possession arrests that he saw ruin people’s lives, preventing them from getting jobs or student loans.

Riffle said he is proud of his new line of work and he predicts there will be more lobbyists like him walking the halls of Capitol Hill.

“In terms of what the future of this is and whether there will be more lobbyists, I’m sure. Because this is an industry, at least it should be an industry just like any other that’s responsibly regulated and run by, rather than criminals and drug dealers and drug cartels, it’s run by tax-paying law-abiding businesses that are regulated and obey regulations or risk losing their licence,” he said.

“And just like any other industry, those businesses have an interest in the regulatory process and will want to have representation where policy is made.”

Riffle, briefcase in hand, takes a minute to pose for a photo then rushes off to another meeting where he will try and influence those policies.